Reds Down Sunwolves to Finish on a High

The Reds have finished the season with back-to-back wins for the first time since Round Five as they overcame the Sunwolves 48-27 in Brisbane.

It is the second successive week the Sunwolves have had to play the majority of the match with 14 men as this time Ed Quirk was given an early bath for his alleged punch of Hamish Stewart on the ground.

This was the deciding factor in the end, as the Reds ran away with it by six tries to three.

After the Reds won a penalty advantage at an attacking scrum, they got over the advantage line with a series of powerful pick and drives from their forwards before openside flanker Liam Wright crashed over from close range for the first try of the match. Jono Lance added the extras.

The Sunwolves fought back and were rewarded with a two three-pointers for their dominance when the Reds were initially penalised for offside by referee Ben O'Keefe and then pinged at the breakdown with one point separating the sides after 15 minutes.

But the Reds wrested back momentum of the game and after impressive ball retention and patience shown by the home side in which they took possession through 20 phases, Eto Nabuli sauntered through a gap he was put in to by Stewart. Lance converted for a 14-6 lead with 22 minutes gone.

However, five minutes later, the momentum swung back in favour of the Sunwolves when they took the ball through 12 phases before Duncan Paia'aua was yellow-carded for a deliberate knockdown as the last man - conceding a penalty try in the process.

But Lance hit back for the home side, creating something out of nothing when he broke Wimpie van der Walt's tackle in midfield and ran the 35 metres to the try-line for a 22-13 lead five out from half-time. To add insult to injury, openside flanker Quirk was red-carded for what was deemed a closed fist to the face of Stewart on the ground - a massive moment in the game - as the Sunwolves were permanently reduced to 14 men.

There was still enough time before the break for Taniela Tupou to muscle his way between Willie Britz and Michael Leitch from close range to reach over with a slick one-handed finish. Lance converted as the hosts took a 29-13 lead into the interval.

The Reds were reduced to 14 men shortly after the interval when Caleb Timu smashed into Parker on the floor. But the Sunwolves were unable to capitalise. Instead, having soaked up the pressure, it was the Reds who went up the other end to score when Paiau'aua ripped the ball away from Leitch in the tackle before sprinting 40 metres and getting the offload away superbly for Nabuli to grab his brace.

The Sunwolves were beginning to play with fire trying to run the ball out from the back and going wide at every opportunity. They were duly punished when Kazuki Himeon's forward pass gifted the Reds an attacking scrum in an excellent position. From the set-piece, the ball was swung left out to the blindside where Timu showed sleight of hand to release Paia'aua in the corner, who didn't need the man outside him.

Moses Sorovi got the Reds' sixth when he dummied and went on his own from the ruck, completely fooling the defence and dotting down despite the best efforts of Yoshikazu Fujita to stop him.

However, the visitors did not stop trying and came away with two further tries to make the scoreline a whole lot more respectable. First, centre Ryoto Nakamura went over in the 72nd minute before hooker Jaba Bregvadze brought the crowd to its feet when he went on a barnstorming run over the whitewash as the Sunwolves fell to a 48-27 defeat in the end. 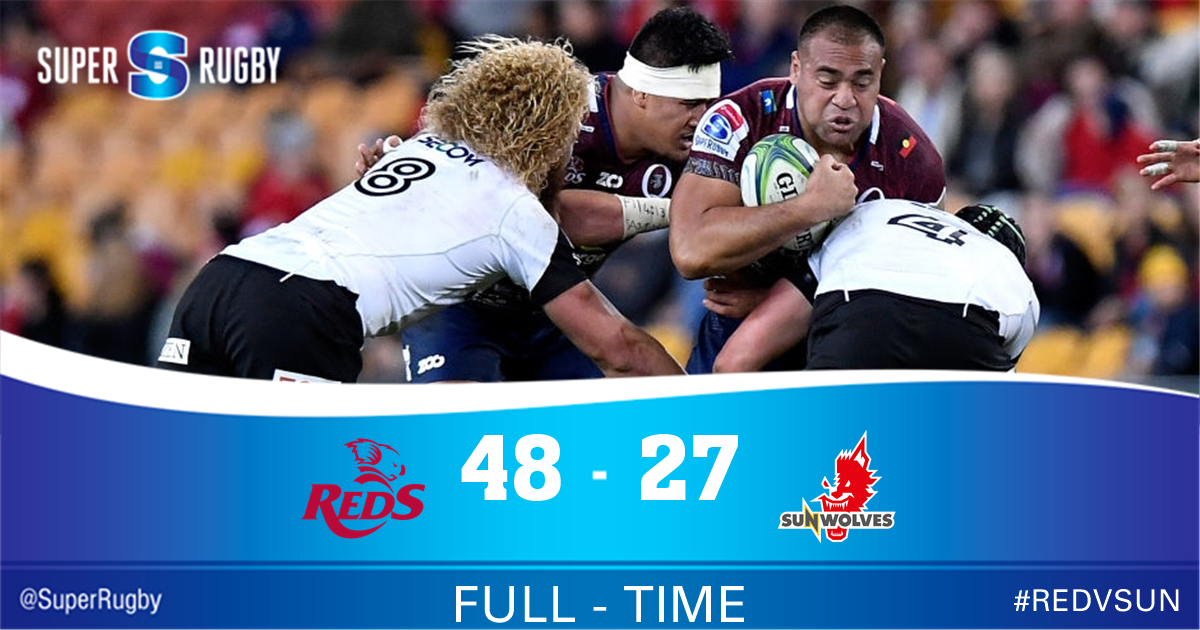