The Reds dealt the Rebels’ playoff hopes a significant blow with a 37-23 victory in a thrilling Super Rugby derby at Suncorp Stadium in Brisbane.

The Sharks now have opportunity to leapfrog the Rebels in to eighth place and the final quarter-final spot when they clash with the Stormers on Saturday, while the Waratahs can close the gap on their Australian counterparts with what should be a routine victoy over the Sunwolves. .

Tries from Izack Rodda, Filipo Daugunu, Jono Lance as well as a penalty try proved too much for the Rebels who scored through Angus Cottrell and Jack Maddocks.

The Rebels had the better of the opening exchanges but weren’t able to breach the Reds’ defensive line. However, the visitors did get on the scoreboard via the boot of Reece Hodge, whose 10th-minute penalty gave his side a 3-0 lead.

Four minutes later, the Rebels were penalised in the exact same fashion when Cottrell was blown up for going off hit feet whilst attempting to steal at the breakdown. Reds full-back Jono Lance made no mistake from the tee to level the scores.

After the Reds won a scrum penalty ,they forced their way in to the Reds’ five-metre zone but butchered the resulting lineout. Although the lineout wasn’t cohesive, their scrum certainly was, with Taniela Tupou particularly brutal on Tetera Faulkner. The Tongan Thor won two successive penalties against Faulkner in this manner and by the third occasion, Paul Williams had lost his patience, awarding the Reds a penalty try, with Tupou receiving slaps on the back aplenty from his teammates.

That had given the Reds a 10-3 lead with 26 minutes gone but soon afterwards, the Rebels hit back with a brilliant team try as they went short side via Jack Maddocks and then Ruru, who found Cottrell with the final pass – the flanker diving over in the corner.

Two minutes later, the turnaround was complete when Maddocks sliced between Caleb Timu and Scott Higginbotham and through the Reds defence with nothing seemingly on. Hodge added the extras for a 17-10 advantage after 33 minutes.

However, two minutes before the interval, the Reds restored parity on the scoreboard when Rodda marked his return to the starting lineup with a try, as the Wallaby lock charged down Maddocks’ exit kick to collect and dot down.

There was still time before the break for the Rebels to lose Faulkner to the sin-bin and concede a try – the prop having been warned by referee Williams that another indiscretion at scrum-time would result in a yellow card.

From the resulting scrum, the Reds piledrived the Rebels backwards, with Higginbotham surging down the blindside and getting the right-arm offload brilliantly away for Nabuli to finish clinically in the corner as the home side took a 24-17 lead in to the interval.

The Rebels made a good start to the second half and reduced the deficit to four points when Hodge added a three-pointer for a Rebels’ tackler not releasing.

And with 47 minutes gone, another Hodge penalty made it a one-point game after Toby Smith was penalised. In the 56th minute, The Reds’ cause was not helped when they went down to 14 men as Duncan Paia’aua was yellow-carded for offside.

The Reds did well not to concede any points with a player off the field, managing to soak up a period of sustained Rebels pressure before going up the other end and extending their lead through a Lance penalty, making the score 27-23 to the Reds with nine minutes to go.

Lance turned try-scorer moments later and seemed to put the result beyond doubt when Jordan Petaia got a classy offload away in midfield for the full-back to run a beautiful line in under the posts, converting his own try for a 34-23 lead. 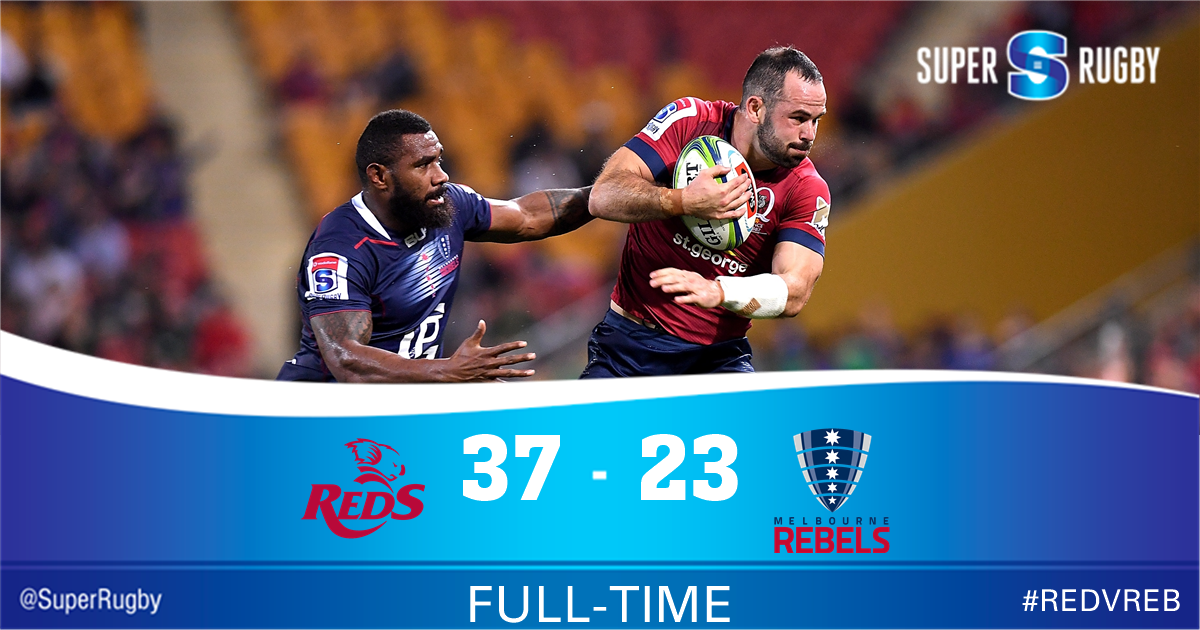