The Reds ended the regular Super Rugby AU season in fine style by overcoming leaders Brumbies 26-7 at Suncorp Stadium in Brisbane on Saturday.

Brad Thorn’s charges were hugely impressive in the first half, going 18-0 in front thanks to Liam Wright and Chris Feauai-Sautia tries. James O’Connor also added two penalties and a conversion before the Canberra outfit responded through Pete Samu’s converted score.

It kept the visitors in contention but they were unable to build on that and failed to score in the second period.

Instead, O’Connor kicked another three-pointer and Tate McDermott went over for the home side to provide the ideal preparation for next week’s elimination encounter against the Rebels.

There was little riding on this result except mere pride and that perhaps resulted in the Brumbies’ disappointing display. With an extra week’s rest, Dan McKellar’s men can put their feet up while they watch the Reds and Rebels do battle on September 12.

The hosts were therefore looking to build some momentum heading into that contest and they were excellent in the first quarter. A strong early defensive effort was followed by a potent attack as Jock Campbell made an incursion through the visiting rearguard.

That got them on the front foot before the full-back came to the fore for the second time in the move as his break and brilliant off-load to Wright allowed the captain to finish out wide.

O’Connor was awry with the conversion but soon made up for that miss by kicking a penalty to increase the Reds’ advantage to eight points.

The Brumbies were rather lacklustre but they managed to string together a few phases. McKellar’s charges worked the opportunity brilliantly, with Nic White sending Tevita Kuridrani scampering towards the line. All the centre had to do was touch down but, in the act of scoring, the ball came loose and gave the home side a reprieve.

Thorn’s team duly took advantage of that profligacy as another successful effort off the tee from their fly-half opened up an 11-point buffer, before it became 18 after 37 minutes.

Once again, Campbell claimed an assist, but this one was slightly easier with the space created by the inside backs. It set up a two-on-one and the full-back’s pass was collected by Feauai-Sautia, who did the rest.

It appeared a long way back for the men from the capital but they managed to respond just shy of the interval as Samu stepped inside and crossed the whitewash.

Buoyed by that score, the Brumbies were better in the second period. They played with far more intensity and challenged the Reds’ whitewash on numerous occasions, but mistakes pervaded their game and halted their momentum.

Twice the Canberra outfit knocked on with the line begging and they duly remained scoreless going into the last quarter. Instead, it was the hosts that scored first in the final 40 minutes as O’Connor added another three-pointer following a breakdown infringement by Will Miller.

That secured an impressive win but the gloss was added by McDermott, who scampered clear to score late on. 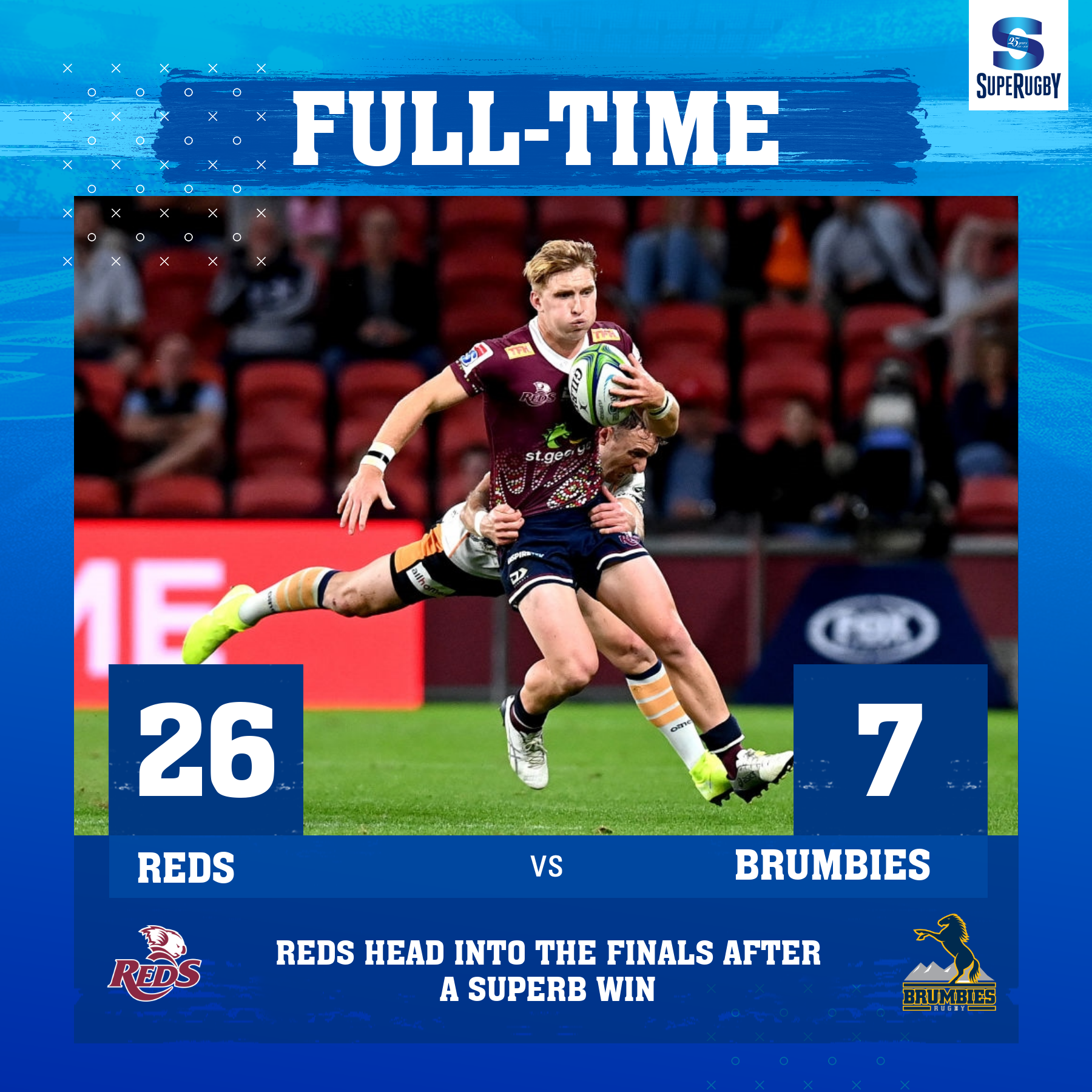