Reds go top of the table with victory over Western Force

The Reds stayed unbeaten in Super Rugby AU with a hard-fought 31-24 victory over the Western Force in Brisbane on Friday.

In a fast-paced and entertaining encounter, momentum between the sides ebbed and flowed with the Force dominating the early exchanges before the Reds gained the upper-hand as the game progressed. The Force mounted a strong finish but could not haul in the home side, who held on for the win.

Byron Ralston led the way for the Force with a brace of tries while their other five-pointers were scored by Jack McGregor and Andrew Ready. Ian Prior succeeded with two conversions.

The Force made a terrific start and raced into a 14-0 lead courtesy of two converted tries in the early stages. McGregor opened the scoring in the 11th minute after gathering a well-timed pass from Marcel Brache on the edge of the Force’s 22.

That try seemed to boost the visitors’ confidence and shortly afterwards Ralston crossed for his first try after Brache and Brynard Stander combined brilliantly in the build-up.

Despite those two converted tries, the home side did not panic, and midway through the half Paenga-Amosa opened their account when he rounded off a flowing move in the left-hand corner.

Shortly afterwards, Hunter Paisami launched an attack from inside his half and beat several defenders before getting a pass off to Tate McDermott deep inside Force territory. The No 9 did well to draw in the final defender and offloaded to Campbell, who crossed for his side’s second five-pointer.

O’Connor converted both tries which meant the sides were level at 14-14 but the Reds took the lead in the 27th minute when Tupou scored their third try after barging over from close quarters.

The latter stages of the half saw the hosts on the attack deep inside the Force’s half, but shortly before half-time Ralston intercepted a pass from O’Connor and raced away to score the Force’s third try.

Although the wing scored under the posts, Daugunu charged down Jono Lance’s conversion attempt which meant the Reds held a slender 21-19 lead at the interval.

The home team were fastest out of the blocks after the restart and extended their lead in the 45th minute when Daugunu stepped past a couple of defenders before crossing for his side’s fourth five-pointer.

The next 25 minutes proved to be scrappy and neither side managed to score points during that period as they committed several unforced errors.

In the 70th minute, Paisami was yellow carded for a dangerous hit on Kyle Godwin which meant the Reds would finish the match with 14 players.

The Force put the resulting penalty into touch deep inside the Reds’ 22 and launched a lineout drive from which Ready barged over for his side’s fourth try. Lance’s conversion attempt struck an upright which meant the Reds were leading 28-24 but despite their numerical advantage, the Force could not score further points.

The game’s final minutes were frantic as the visitors launched several attacks but the Reds eventually sealed their win in the 79th minute when O’Connor slotted his drop-goal from inside the Force’s 22 after the ball went through 15 phases in the build-up.

The result means the Reds have won two and drawn one of their three Super Rugby AU matches while the Force have lost both their fixtures after also tasting defeat against the Waratahs last weekend. 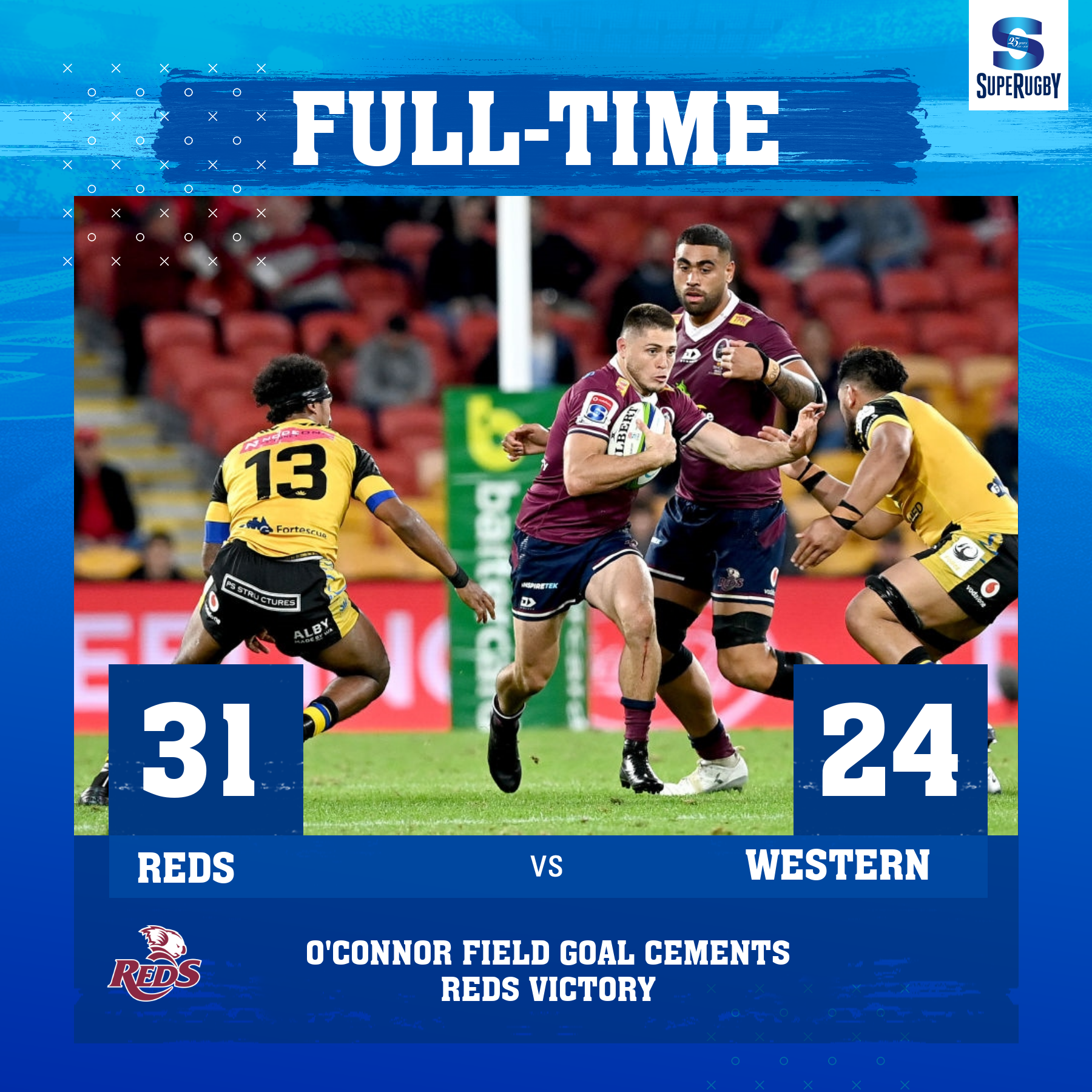