The Reds overturned a 17-point deficit to beat the Bulls 41-17 in Brisbane and pick up their second Super Rugby win of the season.

The visitors started like a house on fire, scoring three unanswered tries in the first half to open up a significant lead, but the Reds soon sprang to life and - after scoring their first try - effectively took control of the contest.

The early signs certainly weren't very good for the home side. The Bulls, who snapped a four-game losing streak against the Highlanders last week, broke the deadlock in the eighth minute following a confident start.

On the front foot in opposition territory, No 13 Johnny Kotze scythed through the defence before offloading to Embrose Papier for their opening try.

Manie Libbok nailed the conversion, and five minutes later they were further in front courtesy of Sevens star Rosko Specman, who produced a trademark burst of speed out wide to beat two defenders and score.

Things went from bad to worse for the Reds a few minutes later when Chris Feauai-Sautia was sent to the bin for a late and dangerous tackle.

The Bulls took advantage of their numerical advantage within seconds as Specman affected another line break before setting up fullback Warrick Gelant, who had oodles of space out wide to cross for try number three. Libbok missed his second conversion of the night, but the Bulls still found themselves sitting pretty with a 17-0 lead.

The Reds desperately needed a response and they found it in the 28th minute after rumbling down the Bulls half and getting a penalty. Opting to kick for touch and set up an attacking lineout, captain Liam Wright scored from the ensuing rolling maul before Bryce Hegarty added the extras as the home side got back to within 10 points.

Shortly before half-time, they reduced the deficit even further when Isaac Lucas dotted down under the sticks after some impressive offloading in the build-up to keep the play alive. Hegarty converted the try as it finished 17-14 to the visitors at the break.

The Reds continued their comeback early in the second half, taking the lead for the first time in the match when flanker Lukhan Salakaia-Loto crossed for their third try following a fierce counter-attack and some more slick handling skills.

Momentum had well and truly swung the home side's way now and shortly after the hour-mark, Hegarty nailed the first penalty kick of the match to extend the Reds' lead further.

The comeback was well and truly complete when hooker Alex Mafi scored the Reds' fourth try in the 69th minute after collecting a long, looping pass out wide.

The Bulls were offering very little resistance now, and the Reds would cross for two more tries in the closing minutes.

Replacement forward Harry Hoopert scored the first after some more relentless pressure near the Bulls tryline, while big prop Taniela Tupou completed the stunning turnaround in the dying moments following another rolling maul up close. 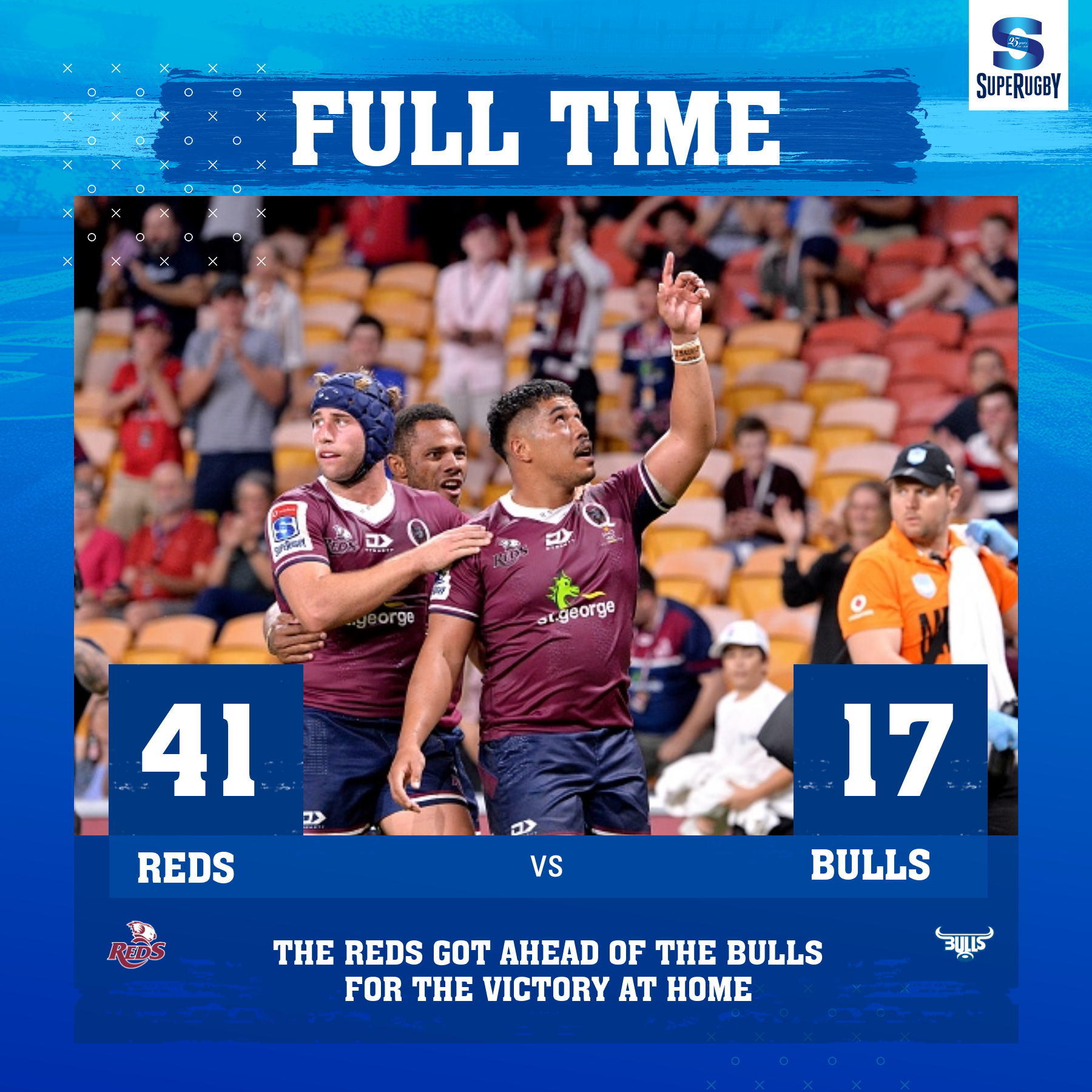