There was pandemonium inside the Suncorp Stadium as a try in injury time from captain James O'Connor handed the Reds a dramatic 19-16 victory over the Brumbies in the Super Rugby AU grand final.

The match was a repeat of last year's final which went to the Brumbies, and even though the Reds were more favoured this time around after beating the Brumbies twice during the regular season to earn a home final in Brisbane, it was the visitors who led for virtually the entire match before O'Connor's injury-time heroics turned things around.

The Reds captain scored all 19 of his side's points as he led from the front with a superb match-winning performance, while the Brumbies were left to rue what might have been as the Reds gained sweet revenge for last year's loss.

While the Brumbies would soon take a firm grip on the contest, it was the Reds who took the lead just two minutes in after hitting a ruck in Brumbies territory with ferocity and earning a penalty, with O'Connor stepping up and slotting his first kick of the evening.

The Brumbies nearly hit back after spending several minutes in the Reds 22, but they couldn't find a way over the line despite keeping the ball in hand for 13 phases, and the Reds eventually earned a relieving penalty.

The Brumbies kept coming, however, and this time they found the opening they were looking for, as solid phase play and quick ball allowed them to create numbers on the outside, with Noah Lolesio timing a perfect inside pass to fullback Tom Banks for the score.

With the Brumbies bossing the territory and possession stats, the Reds needed something to lift them, and they found it in the form of their front row, who earned a valuable relieving penalty thanks to a powerful shove in the scrum.

But while the Reds pack was looking solid, they were having a nightmare at line-out time, losing several throws in succession to hand possession back to the Brumbies every time.

The stark contrast in the Reds' set-piece fortunes continued as Taniela Tupou earned another penalty at scrum-time with another huge shove as the hosts finally found themselves back in the Brumbies 22.

The Reds nearly took full advantage of the opportunity when they barrelled their way over the line via that man Tupou again, but somehow Nic White managed to get his leg under the ball just long enough to prevent the ball from being grounded before the referee's whistle blew.

The Reds had to settle for an earlier penalty advantage instead, with O'Connor taking the points on offer to reduce the deficit to just one, but they would infringe straight from the restart to hand the three points back to Lolesio and the Brumbies.

Shortly before half-time, the Reds gave away a rare scrum penalty, allowing Lolesio to step up and hand the Brumbies a 13-6 lead heading into the break.

The second half almost started in spectacular fashion for Jordan Petaia and the Reds, as the ball was shifted out wide where Petaia nearly scored with a fantastic dive for the line, with his body only just sliding into touch before he got the ball down.

Moments later, O'Connor was given another shot at goal, and though he hit the upright, the flyhalf was soon given another chance to go again, making no mistake this time. 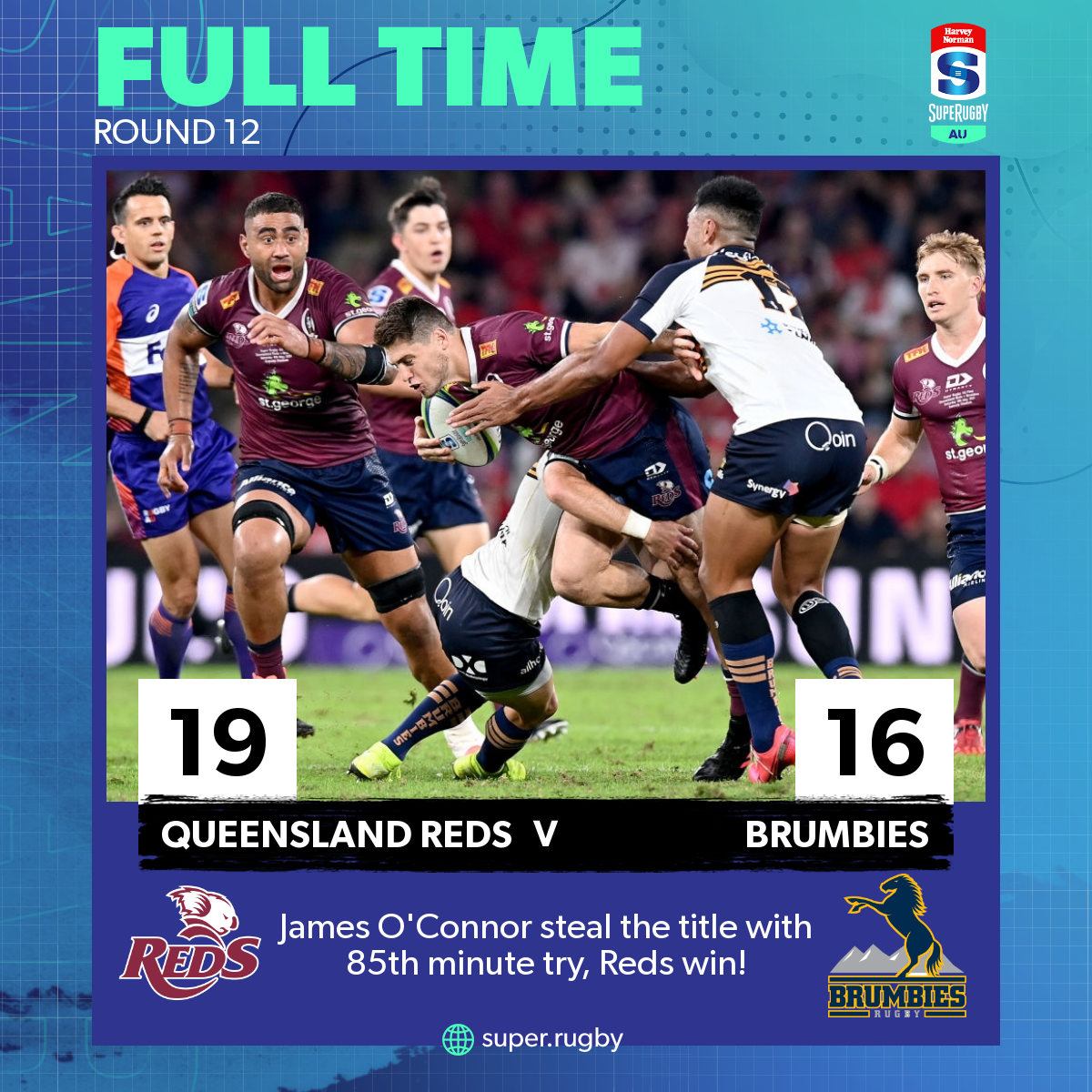 The second half was turning into a real arm-wrestle, with neither side able to gain the ascendancy for any length of time. The Reds were looking more solid with their line-out troubles behind them, while the Brumbies were still showing flashes of the form that saw them boss the first half.

Matters threatened to boil over just before the hour-mark as a melee broke out, although it was little more than a push and a shove and no one lost their heads and started swinging.

A much bigger moment in the game followed shortly after when Brumbies No 8 Rob Valetini went in too high in the tackle and got a yellow card for his troubles, leaving the visitors a man down for 10 minutes.

When the Reds earned another shot at goal a couple of minutes later for a breakdown infringement from the Brumbies, O'Conner stepped up and converted to make it a one-point contest.

But the Brumbies were doing a superb job of winding down the clock and retaining possession while Valetini did his time on the sidelines, and with 10 minutes to go, they earned a penalty right in front, allowing Lolesio to put them four points clear once again.

But back came the Reds when centre Josh Flook broke clean through the line and charged into the Brumbies territory, with the referee handing them several penalty advantages as O'Connor went for the try rather than take the points on offer.

As the clock wore down, the Reds forwards continued to assault the Brumbies line, with Darcy Swain and Henry Stowers both receiving their marching orders as the visitors continued to give away penalties in desperation.

That led to an extraordinary finish, with the Reds opting to scrum against a six-man Brumbies pack, and earning several more penalty advantages, before a quick tap and a quick pass out wide finally allowed O'Connor to crash over for the winning try - much to the absolute delight of the Queensland faithful inside the stadium.