The Reds moved up to second on the Super Rugby AU table after a late try from Hamish Stewart handed them a precious 19-3 bonus-point victory over the Rebels in Brisbane.

It was all going relatively smoothly for the side from Melbourne as Matt Toomua rewarded their early control with a penalty, but quickfire tries put the Queenslanders in command.

Jordan Petaia and Brandon Paenga-Amosa both crossed the whitewash to move the hosts 14-3 in front and it was a lead they would not relinquish.

The pressure was relentless from the visitors in the second period, but the Reds refused to budge in what was an excellent rearguard shift before Hamish Stewart put the result beyond doubt.

They are now just two points behind log leaders the Brumbies, while the Rebels have moved down to fourth place.

Brad Thorn’s men were stunned in their previous encounter, succumbing to the previously struggling Waratahs 45-12, and they were under pressure early on at Suncorp Stadium.

The Rebels, who have been on a fine run, appeared in impressive form, going close several times before Toomua finally kicked them in front with a simple penalty.

They didn’t quite get the reward they perhaps deserved, however, and the hosts hit back via their returning 20-year-old wing. Petaia was back in the starting line-up after missing last weekend’s game due to the passing of his father, so it was apt that he was the one that opened his team’s account.

It all came from a dominant scrum as Taniela Tupou and his front-row colleagues went to work. The Queenslanders sent their opponents into reverse and, after the ball was shifted out of the set-piece, the Australian international spotted a gap to slither through and touch down.

Buoyed by that score, the Reds went over again and this time it was the backline that did most of the work when Jock Campbell broke clear. The full-back found Filipo Daugunu and the wing produced a brilliant off-load for Paenga-Amosa to finish.

That effort gave them an 11-point buffer at the interval and they remained over a converted try ahead of the visitors, despite being under duress at the beginning of the second period.

The Rebels looked for the score which would get them back into the contest, but the Reds’ rearguard action was outstanding. Tate McDermott prevented Isi Naisarani from touching down with a brilliant tackle and his resilience and defensive skill epitomised the team’s efforts.

It was a staggering performance from the hosts but they were also helped by the Rebels, who were profligate, and Naisarani’s knock-on when over the whitewash rather summed up Dave Wessels’ charges.

Instead, it was Thorn’s outfit that scored the first points of the half six minutes from the end as James O’Connor fed Stewart, who scampered clear and sealed a superb victory. 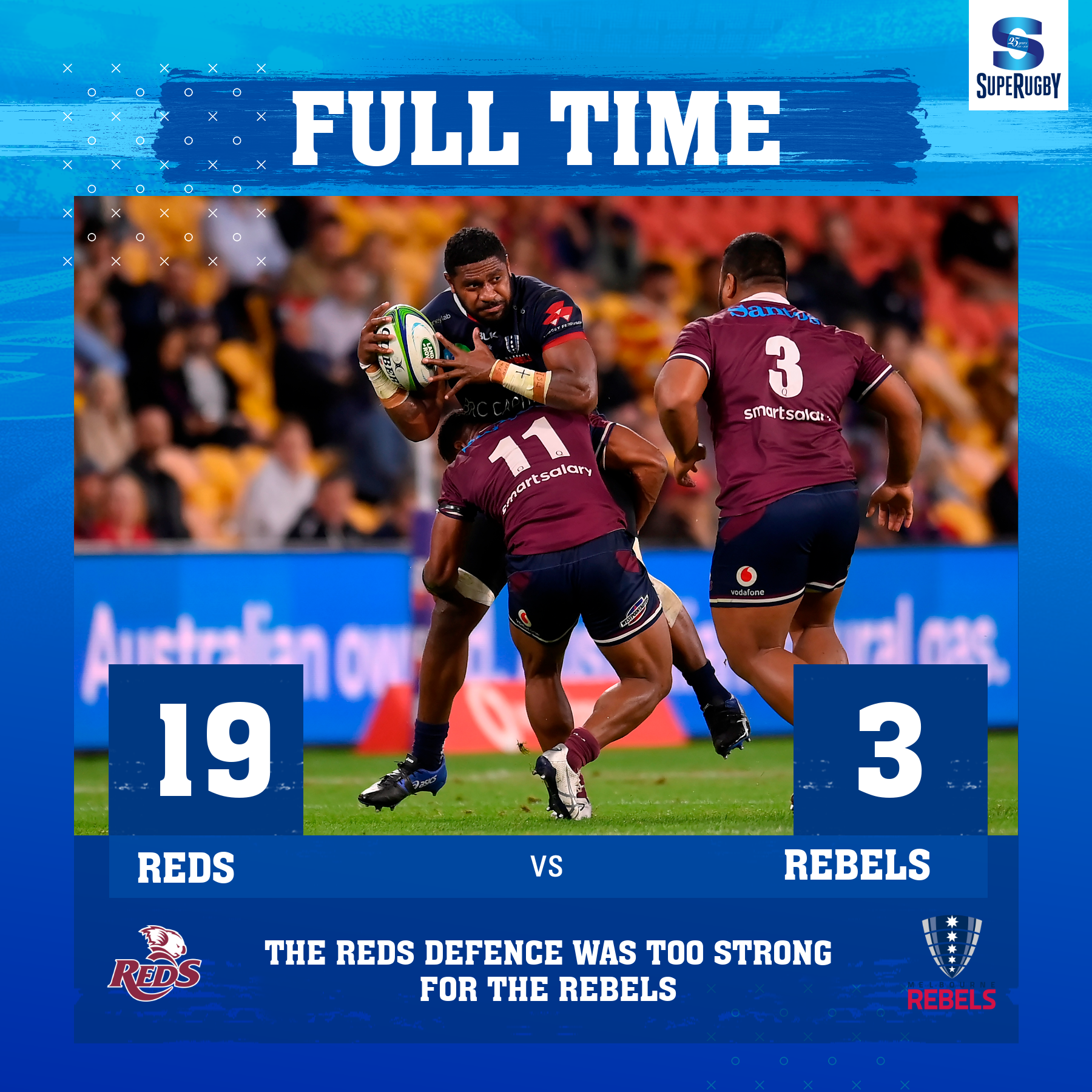