The Queensland Reds mounted a superb second-half comeback to clinch a 31-34 Super rugby victory over the Sunwolves in Japan on Saturday.

The Reds left it late, though, as Hamish Stewart converted a 79th-minute penalty to help the visitors claim their first win of the Super Rugby campaign and move off the foot the overall standings.

The hosts broke the deadlock after 11 minutes of play as Michael Little broke from inside his own half, beating several defenders before offloading to Hosea Saumaki, who in turn slipped the ball to Jamie Booth for the scrumhalf to dive over the line.

The Reds hit back just six minutes later, Liam Wright crashing over the line after a maul that went over 20 metres following a lineout on the Sunwolves' 22m line.

However, Sunwolves were quick to reassert their dominance as Gerhard van den Heever drew the Reds defence with a clever run before laying the ball off to Rahboni Warren-Vosayaco who went through in the corner unopposed.

And, the Reds added a third try on the stroke of half-time as Dan Pryor showed great hands, racing through on the left-hand touchline.

Trailing 21-5 at the start of the second half, the Reds reduced the deficit in the 58th minute as another scrum penalty and maul resulted in a try for Brandon Paenga-Amosa, Hamish Stewart slotting the conversion.

Sunwolves were still reeling from that try when the Reds struck again three minutes later, substitute Harry Hoopert finishing off a great team move after building all the way from the back through seven phases.

Paenga-Amosa bagged his second try four minutes later following a TMO decision, handing the Reds the lead for the first time, with Stewart converting to make it 21 points in 6 minutes by the visitors.

Sunwolves struck back in the 68th minute, drawing level as Keisuke Uchida raced over the line following an error by the Reds from the kick-off.

But the Reds were having none of it as Tate McDermott dived over after an attempted clearance was charged down, only for Stewart to send his conversion wide of the mark.

Stewart quickly made amends for that miss, however, as he slotted a penalty in the 79th minute to help the Reds claim their first win of 2019. 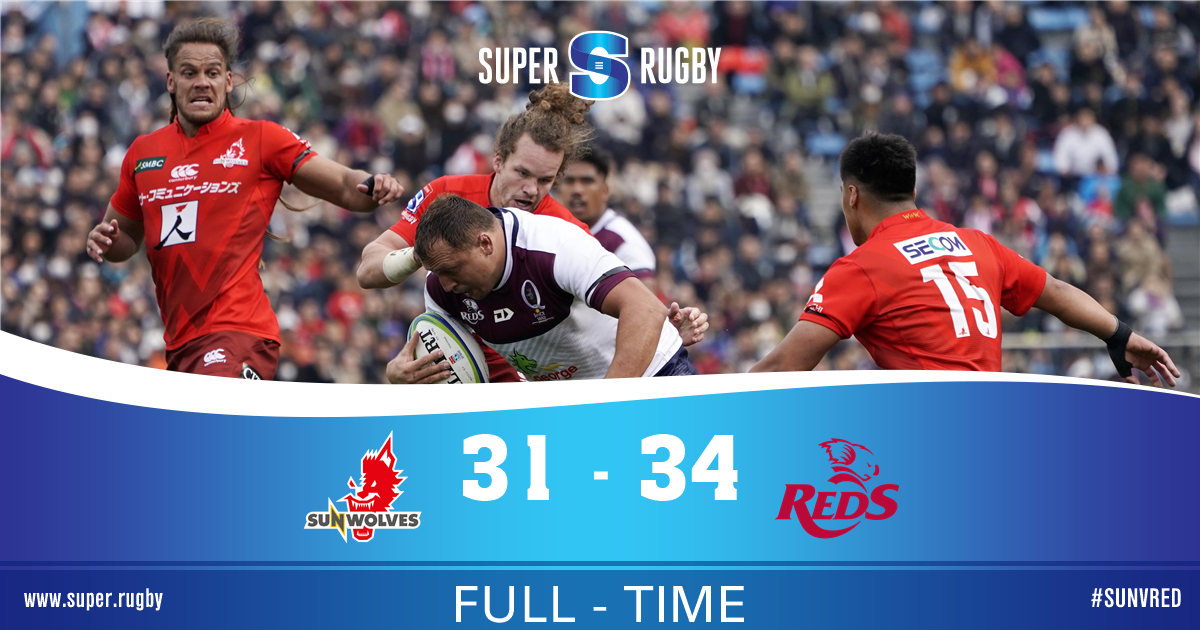