Reds Squeeze Past Bulls in Brisbane

The Reds made it back-to-back wins for the first time since 2014 as they prevailed 20-14 against the Bulls at Suncorp Stadium in Brisbane.

After that shock defeat to the Rebels in Round One, the Reds have responded in emphatic fashion, with victories over the last year's Australian Conference winners the Brumbies and now three-times champions the Bulls

Each of the last 12 meetings between the Reds and Bulls has been won by the home team on the day. A win this weekend is a momentous one for the Reds as it is the first time they have notched consecutive Super Rugby wins since May-June 2014 and it comes in their 150th Super Rugby game.

The Bulls have won just two of their last 20 games outside South Africa, with their last international win coming in Round 10, 2016.

The scrum is an area the Bulls have traditionally prided themselves on but the Reds won this battle on Saturday. The Tongan thor, Taniela Tupou, who signed a new contract at Ballymore during the week, enjoyed another terrific outing and so did captain James Slipper.

The Bulls began the brighter of the two sides. After Eto Nabuli was penalised for a deliberate knockdown, Handre Pollard went for the corner.

As the ball was sent down the Bulls backline, Jesse Kriel got on the outside of Filipo Daugunu from Pollard's pass and drew the final defender Aidan Toua before timing his pass perfectly for Warrick Gelant to dot down under the posts for an easy conversion and a 7-0 lead with five minutes gone.

The Reds began to take over control of the possession and territorial stakes and were rewarded with a James Tuttle penalty after a string of Bulls players were guilty of straying offside.

But the Bulls extended their lead against the run of play. Travis Ismaiel pounced on a loose Reds pass and did well to spot the mismatch between himself and Izack Rodda, getting on the outside of the giant Reds lock and breaking the line, before making a beautiful reverse pass for Jesse Kriel who made one final pass on his inside for Andre Warner to canter under the posts and cap a superb team try. Pollard added the extras for a 14-3 lead after 25 minutes.

Finally three minutes before the interval the Reds were finally rewarded with a try for their efforts as Taniela Tupou showed quick hands to free Caleb Timu out on the left touchline for an easy finish after the home side had taken the ball through numerous phases. Tuttle made a difficult conversion from out on the touchline to cut the deficit to four as the hosts went in to the break trailing 14-10.

After a sloppy start to the second half which saw both sides making a number of handling errors, The Reds took the lead in the 46th minute. Daugunu received a Bulls kick and set off on a mazy run as he spotted the mismatch to get on the outside of a prop and break the line. He found Brandon Paenga-Amosa who showed quick hands to unleash Aidan Toua. The full-back ran on to the ball with serious momentum and showed the Bulls defence a clean set of heels on his way over the whitewash.

The scrum is an area the Bulls have traditionally prided themselves on but the Reds won this battle on Saturday. The Tongan thor, Taniela Tupou, who signed a new contract at Ballymore during the week, enjoyed another terrific outing and so did captain James Slipper.

With five minutes to go, Jono Lance extended the Reds' lead to six points at 20-14 with a penalty after substitute fly-half Marnitz Boshoff was penalised for a high tackle.

Despite some late Bulls pressure, the Reds held on for a 20-14 lead, ensuring the Bulls remain winless at Suncorp Stadium. 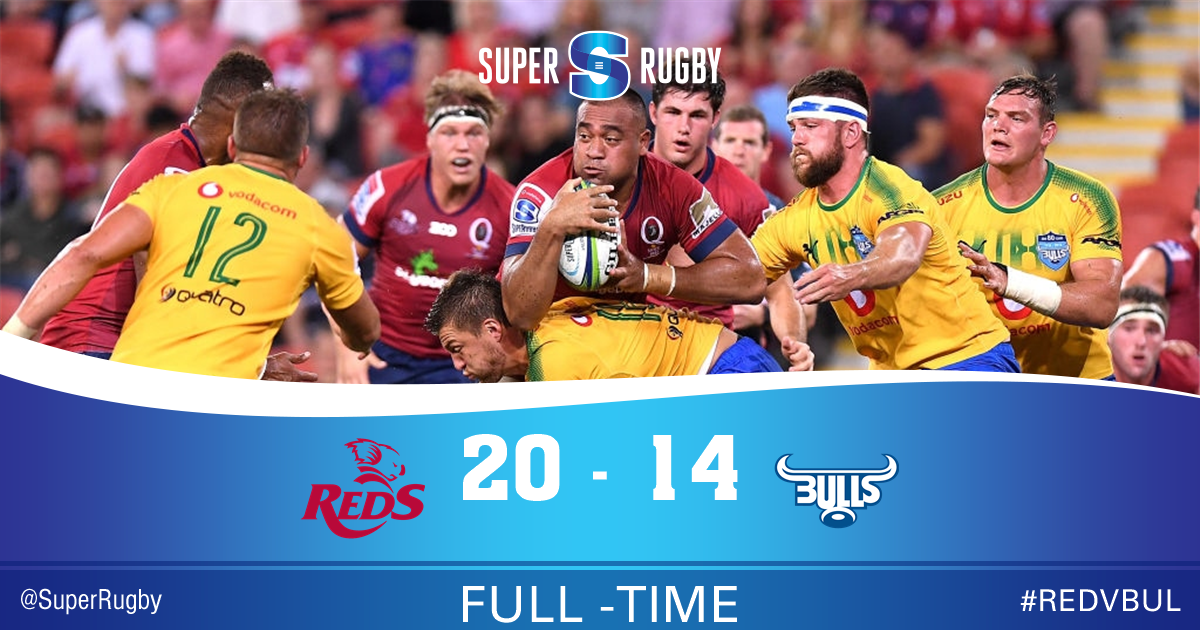