The Reds had to battle right to the very end before overcoming a committed Force outfit 26-19 at the Suncorp Stadium on Saturday.

Things were looking for ominous for the Force when the home side raced out to an early 11-point lead, but Tim Sampson's men somehow stayed in the fight for the entire 80 minutes and nearly salvaged a draw for their efforts.

The result sends the Reds to the top of the Super Rugby AU table with four wins from four, while the Force remain rooted in fourth spot despite their valiant performance.

Conditions were wet and drizzly but it didn't take the Reds long to start looking dangerous and had an early pass to a charging Hunter Paisami gone to hand, it could have been trouble for the Force.

When another strong period of possession handed them a penalty in the Force 22, they opted for a scrum, and after getting a good hit, scrumhalf Tate McDermott was able to wrong-foot the defence and storm into a half-gap for the opening try of the evening.

Not long after, it was the Force's turn to apply some pressure at scrum-time, earning them a penalty which Jake McIntyre converted with a minimum of fuss to bring them back to within four.

The Reds were looking pretty ruthless with ball in hand, however, and when a deft pass out wide allowed Jock Campbell to storm into the 22, a quick recycle saw the ball find Paisami, and there was simply no stopping him from up close.

To the Force's credit, they came back at the Reds with some intent, and after stringing together several solid phases and probing near the tryline, a powerful drive from Sitaleki Timani allowed the big lock to stretch over and score.

Back came the Reds again storming into the Force 22, though this time try-scorer Timani was on hand to pull off the steal and win the penalty.

When a high tackle from the Reds gave McIntyre the chance to kick for touch up close, the Force took it right to the line where Greg Holmes came within inches of scoring. Instead, they took the points on offer from their penalty advantage as McIntyre made it a one-point game heading into half-time.

The Reds butchered a certain try early in the second half when Angus Blyth had three men on his outside with the tryline beckoning and threw a horror pass that missed them all. 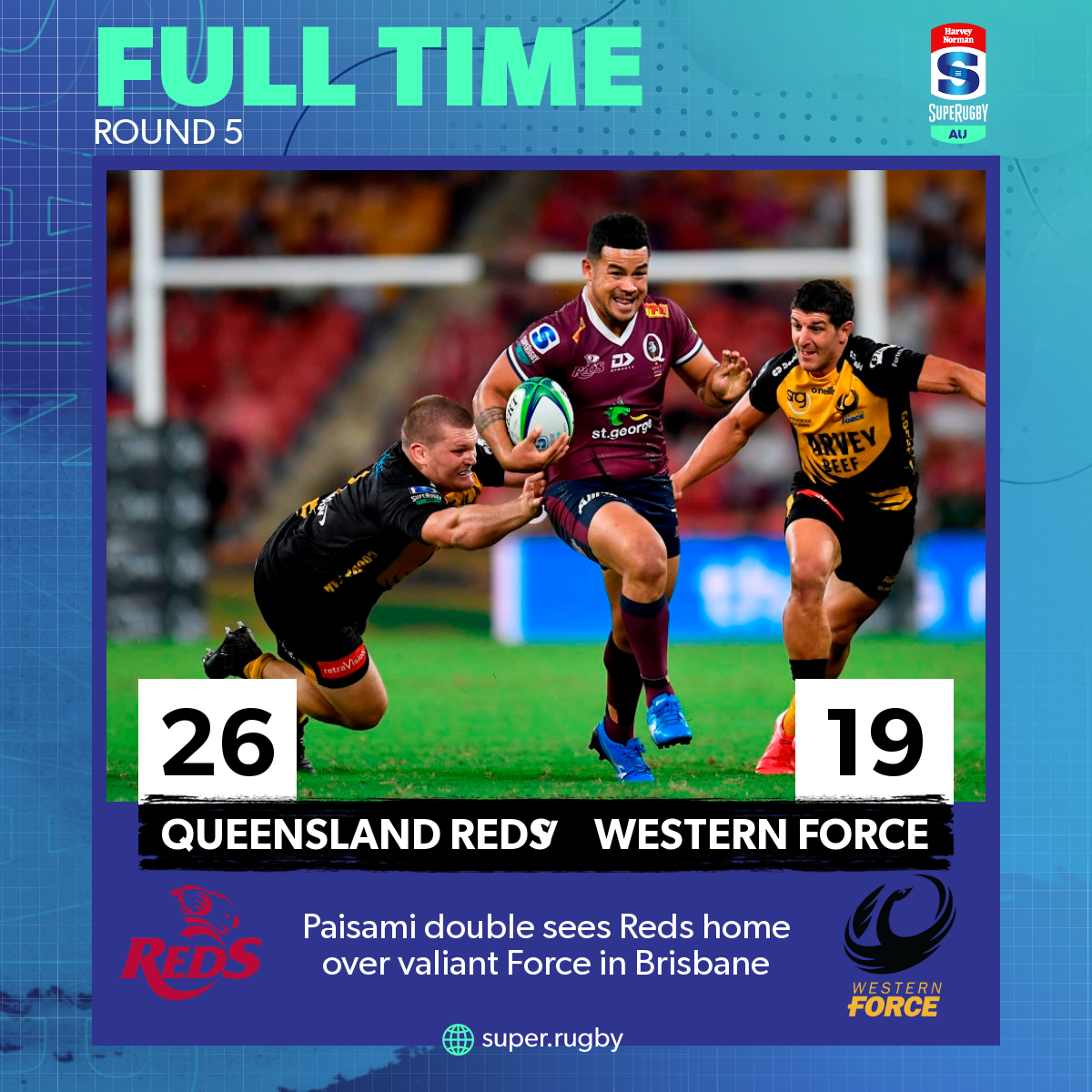 Moments later, after regaining possession via a scrum penalty and setting up the attacking lineout, the Reds thought they were in again via Fraser McReight, but the TMO ruled the try out because McReight wasn't the last man in the ruck when he picked the ball up and dotted down.

Instead, it was the Force who scored first and took the lead for the first time in the match when a high shot handed them a penalty in a kickable position.

With nothing really happening for the Reds, it needed a bit of individual brilliance to spark them, and Paisami was just the man to provide it. Following a quick turnover at the ruck, he collected a pass in the midfield and straightened to break the line and run all the way for the try. O'Connor couldn't convert as the Reds took a 19-16 lead.

When Reds lock Lukhan Salakaia-Loto gave away his second penalty for a high tackle shortly after, McIntyre obliged to tie up the scores.

The Reds were nearly in again after some amazing interplay between the backs and forwards took the ball to the outside and then back inside, but the final pass couldn't go to hand and the chance went begging.

The hosts always looked likely to score again, however, and it finally came via Suliasi Vunivalu, who created the opening in the midfield with a powerful run and brutal hand-off on Jack McGregor before offloading to Campbell on the outside for the easy run-in.

With time running out, the Force earned several penalties in kickable positions and opted for touch each time, but despite coming close, they couldn't find a way past the Reds defence, as it all ended with Reds substitute Brandon Paenga-Amosa securing the penalty turnover right near his own tryline.