The Reds registered their first win of the Super Rugby campaign when they beat the Brumbies 18-10 their Australian derby in Brisbane on Friday.

It was hardly a match to write home about as both sides committed a plethora of mistakes and although the Brumbies outscored their hosts two tries to none, their high penalty count led to their undoing.

The result means both teams have won and lost a match apiece after two matches and the Brumbies will be kicking themselves as poor goalkicking meant they failed to gather a losing bonus-point.

In an error-strewn first half, the home side held the upper-hand during the early exchanges but two penalties from the boot of James Tuttle were the only points they amassed during the first half.

The Reds dominated the possession and territorial stakes in the opening period and should have scored at least two tries during that time with Eto Nabuli wasting their best chance when he knocked on with the try-line at his mercy in the 21st minute.

Earlier, Tuttle opened the home side's account off the kicking tee in the 10th minute and he added his second penalty 15 minutes later but the Brumbies narrowed the gap when they scored the opening try on the hour-mark.

From a scrum on the Reds' five-metre line, Joe Powell shifted the ball to Henry Speight, who gathered in the fly-half channel but his progress was halted close to the try-line. Powell regathered at the ruck before gliding through a gaping hole in the home side's defence and crossed for an easy five-pointer.

Christian Lealiifano failed to convert and although the Reds were reduced to 14 men, when Caleb Timu was yellow carded for a shoulder charge on Tom Banks in the 36th minute, there was little interesting to report for the rest of the half which meant the Reds led 6-5 at half-time.

The dour nature of this contest continued after the interval and we had to wait until the 58th minute for points to be scored when Tuttle slotted his third penalty.

He was replaced shortly afterwards which meant Jono Lance took over the goalkicking duties, and five minutes later he succeeded with his first penalty after the Brumbies were blown up for illegal scrummaging.

And in the 71st minute, he nailed another three-pointer off the tee which meant the Reds led 15-5 with time running out on the clock.

This sparked the Brumbies into action and four minutes later Isi Naisarani made a break from the back of a scrum - deep inside the Reds' 22 - before crashing over for his side's second try.

Lealiifano's conversion attempt was off target again but although the visitors still had a chance to claim victory, the Reds had most of the possession during the closing stages.

And just before full-time, Lance added another penalty which secured his side's victory and also denied the visitors a bonus point. 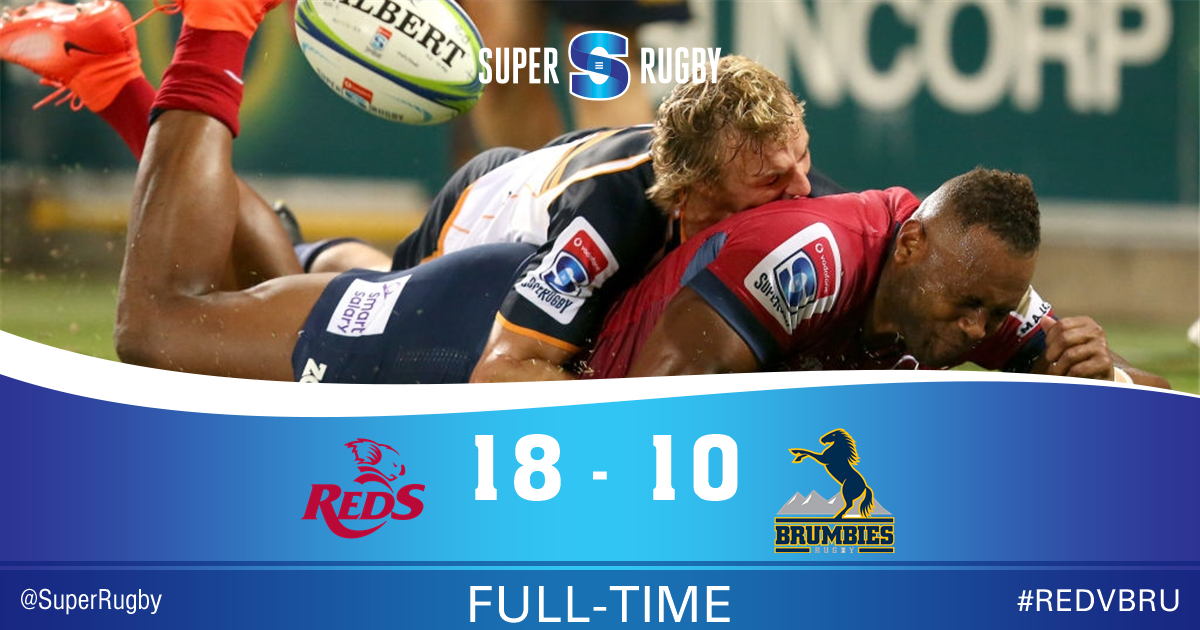