The Blues produced a rugby masterclass at AAMI Park on Saturday as they ran in six tries to hammer the Rebels 50-3.

The visitors drew first blood in the sixth minute when Finlay Christie kicked the ball into touch with the Blues enjoying a penalty advantage. The penalty was awarded and Otere Black made no mistake as he slotted it for a 3-0 lead.

Only three minutes later the Rebels levelled matters with a penalty conversion of their own. The hosts' forward pack put the Blues under huge pressure at the scrum and earned a penalty which Matt Toomua put between the sticks for 3-3.

The Blues forwards did not take kindly to their defeat and got one back as they won a penalty with a big shove at the next scrum to give Black an easy penalty to restore the lead.

The momentum seemed to be in the Aucklanders' favour as they extended their lead to six points with Black slotting his third penalty of the game.

Another penalty went the Blues' way in the 32nd minute as the Rebels succumbed under the pressure. Black converted his fourth of the day for a 12-3 advantage.

Right on the stroke of half-time the Blues asserted their dominance by scoring the opening try of the game. Brilliant build-up play was followed up with a move out wide where captain Tom Robinson shook off a tackle to dive over for the five-pointer. The conversion was missed and the away side took a 17-3 lead into the dressing room.

The New Zealand outfit started running away with the game after the break as they scored their second try in the 47th minute. Hoskins Sotutu powered his way over the tryline despite the best efforts of Michael Wells, and Black kicked over the conversion.

The big number eight terrorised the Rebels defence again as he crashed over for his second try after the Blues pack shoved their hosts onto their own tryline with a powerful scrum. Black slotted the conversion for 31-3. 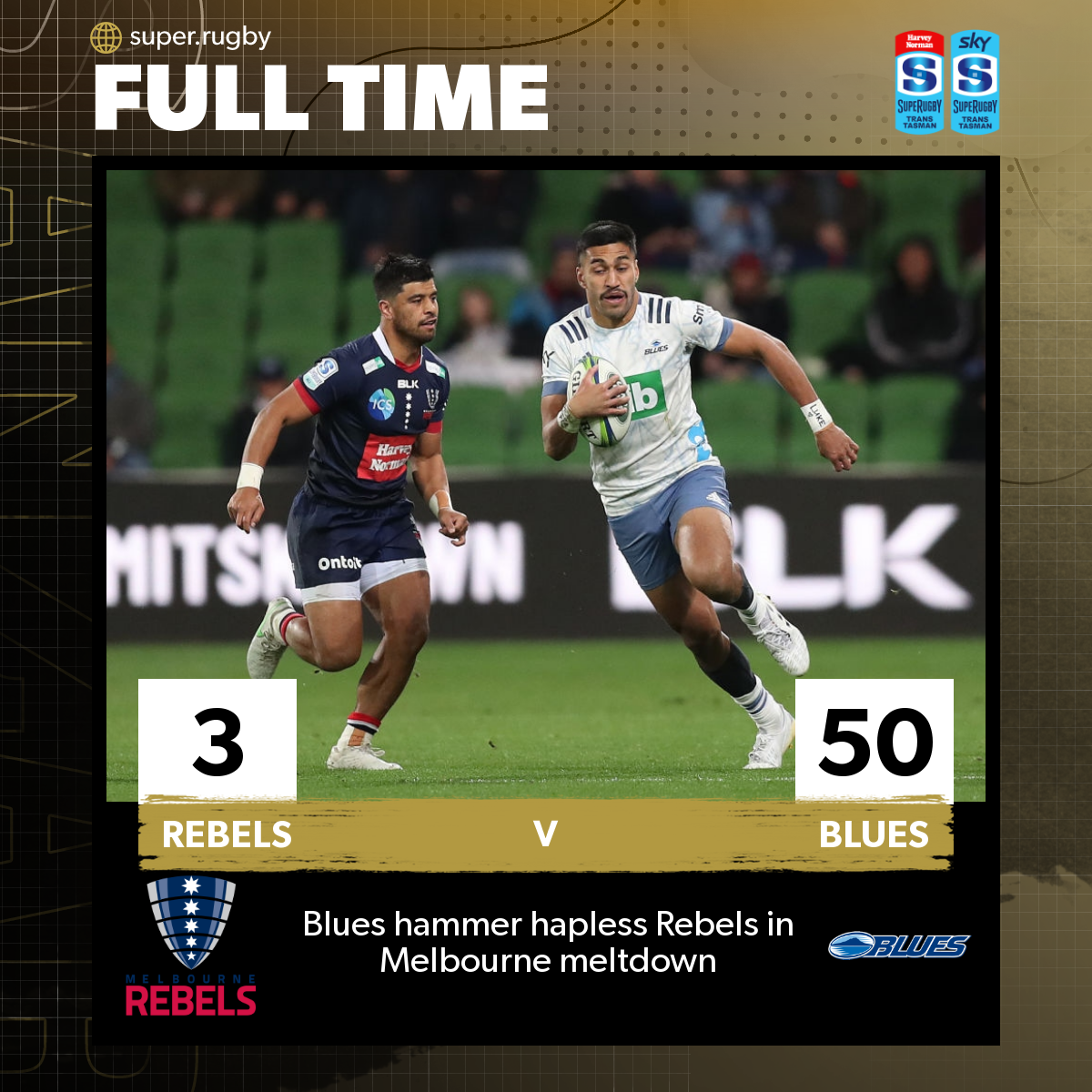 Some clever footwork from Akira Ioane sent the Rebels defence the wrong way on the hour mark, allowing him to score the Blues' fourth try. Substitute Harry Plummer missed the conversion.

The Rebels' woes continued as their relentless visitors scored a fifth try. This time it was Plummer who set up the play with a cunning cross-field kick which fell perfectly for AJ Lam who was delighted to stroll over for a try. Plummer converted to make it 43-3 to the travellers.

In the last few minutes of the game the Blues reached the half-century mark as Ioane scored his second and his team's sixth try. A Rebels lineout error gave the Auckland team the opening to bulldoze forward with a maul and give Ioane the chance to cap off the one-sided win with another try.