The Crusaders were at their ruthless best as they hammered the Bulls 45-13 at Loftus Versfeld on Friday, securing their ninth victory of the Super Rugby campaign.

Sevu Reece picked up a hat-trick while Richie Mo'unga grabbed a brace and there were further tries from Mitchell Dunshea and Scott Barrett.

In reply the Bulls' only try came via Burger Odendaal while Handre Pollard kicked eight points as they missed the chance to move clear in South Africa's Conference.

It was a first period to forget for the Bulls as they trailed 26-6 after the Crusaders ran in four tries in a one-sided opening 40 minutes.

The early signs were positive for the visitors as they went through the phases and were making metres at will, with the first score looming.

That came on 14 minutes when George Bridge's chip over the top evaded Pollard and in turn landed into Mo'unga's arms for a simple run-in.

Pollard did strike back four minutes later when Jordan Taufua was caught offside at a ruck, the Bulls and Bok fly-half adding three points.

However, Mo'unga was on song in the opening quarter and crossed again on 22 minutes, slipping RG Snyman and then Pollard for a second try.

Despite Pollard making it 14-6 with his second penalty of the evening, the Crusaders would cross again soon after, Bridge and centre Jack Goodhue involved before second-row Dunshea showed decent pace and power to go over on the left wing. That try moved the Crusaders 19-6 up.

They still had time for one further crossing before the break as space for Kieran Read on the right set up Reece for a concerning try from the Bulls point of view. For the Crusaders they would have been pleased with their efforts, having that bonus-point buffer in their pocket.

Unsurprisingly the procession continued early in the second half as Reece raced over seven minutes in, with the advantage up to 27 points. That prompted the Crusaders to ring the changes although one was a concerning alteration, an injured Joe Moody being helped from the field.

The Bulls supporters did have something to cheer on 54 minutes when a sustained spell of possession led to Odendaal diving over for 33-13.

But their joy was shortlived as Reece's hat-trick was complete on 66 minutes, with Mo'unga's cross-kick finding his wing for a 40-13 lead.

There was more to come too from the New Zealanders as Barrett powered his way over the whitewash to wrap up an emphatic 45-13 away victory. 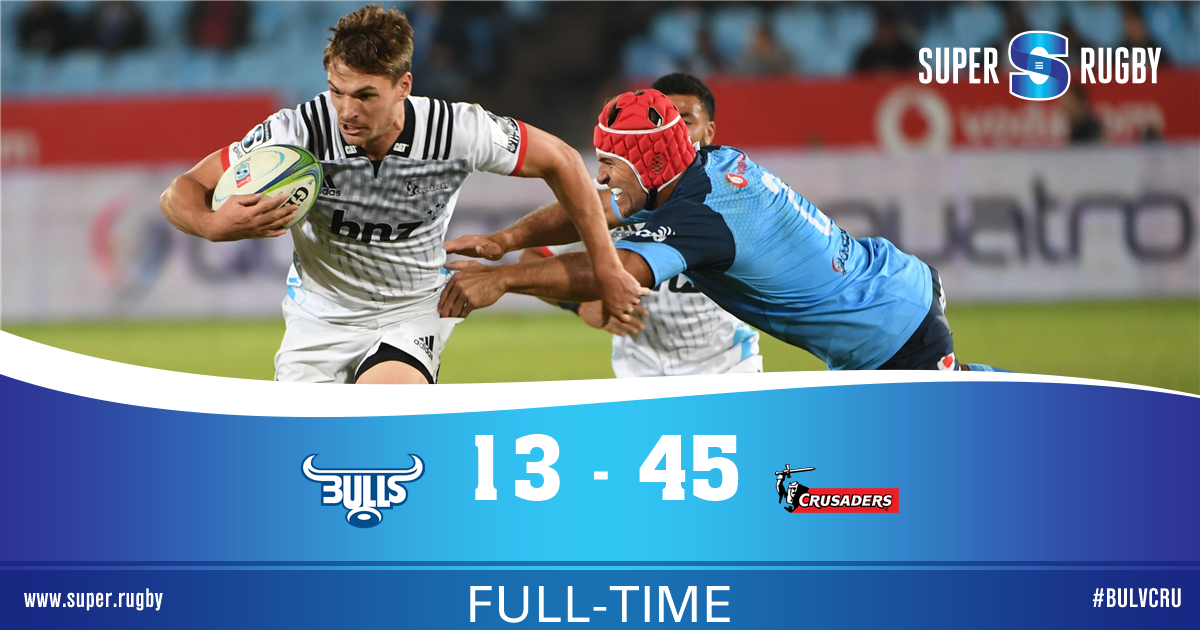