The Crusaders earned their second Super Rugby Aotearoa win with a dominant 33-16 win over the Hurricanes in Christchurch on Sunday.

It was a bright start for the Hurricanes, but the hosts turned on the class when their rival were reduced to 14 men and showed excellent defence in the second half.

The Hurricanes' Jordie Barret opened the scoring in the fourth minute after the Crusaders conceded a penalty at ruck time.

The visitors had the first chance to cross the whitewash when a promising Crusaders attack was thwarted by a Jackson Garden-Bachop intercept from just outside his own 22m. But wingers Sevu Reece and Leicester Fainga'anuku showed great pace to eventually track him down and bundle him into touch in-goal.

Another error at rucktime from the Crusaders saw Barret chip over another thee points to double the lead after 13 minutes.

The Hurricanes were then reduced to 14 men after a textbook lineout drive took the Crusaders to within 5m of their line. Captain Ardie Savea was the man guilty of collapsing the maul and it would end up costing his side dearly.

In pursuit of five points, Crusaders opted for a scum 5m out and won another penalty. Codie Taylor caught the defence napping as he tapped quickly and charged over the whitewash.

Just minutes after celebrating his try, Taylor burst through a midfield gap and made 25m. The hooker slipped the ball inside to scrumhalf Mitchell Drummond who showed great hands to offload to All Black flyhalf Richie Mo-unga, who added seven points to the scoreline to make it 14-6 after 26 minutes. Unrelenting attacks from the home side resulted in flanker Ethan Blackadder sniping over the line from close quarters as a dejected Savea returned to the paddock, his charges having conceded 21 unanswered points in his absence.

The Crusaders continued the one-way traffic as rain began to fall at Orangetheory Stadium, taking it through the phases to eventually put Scott Barrett over in the corner on the cusp of halftime.

The woes continued for the Hurricanes in the second stanza. Dangerous hooker Asafo Aumua was forced to leave the field with an injured shoulder and Ricky Riccitelli was thrown into the cauldron, immediately having to throw into a lineout 5m from his own line. Riccitelli overthrew his jumper and Taylor snapped the ball up at the back, going over untouched for his second try.

The Hurricanes would finally get reward after a questionable scrum penalty on the halfway line. Barrett would find a good touch close to the Crusaders' line. After several penalties from a rolling maul, Riccitelli would finally crash over in the corner, taking the scoreline to 33-11.

With the Hurricanes discipline and defence much improved, the sides were more evenly matched as the clash came to a close in slipper conditions. Crusaders replacement Will Jordan almost scored a freakish try after getting on the other end of a clearing kick from Reece, but the TMO judged that he knocked the ball on.

The Hurricanes would finally ad some respect to the scoreline when Barrett executed a speculative cross-field kick which the Crusaders defence failed to deal with, resulting in centre Peter Umaga-Jensen scampering into the corner for the final score of the match. 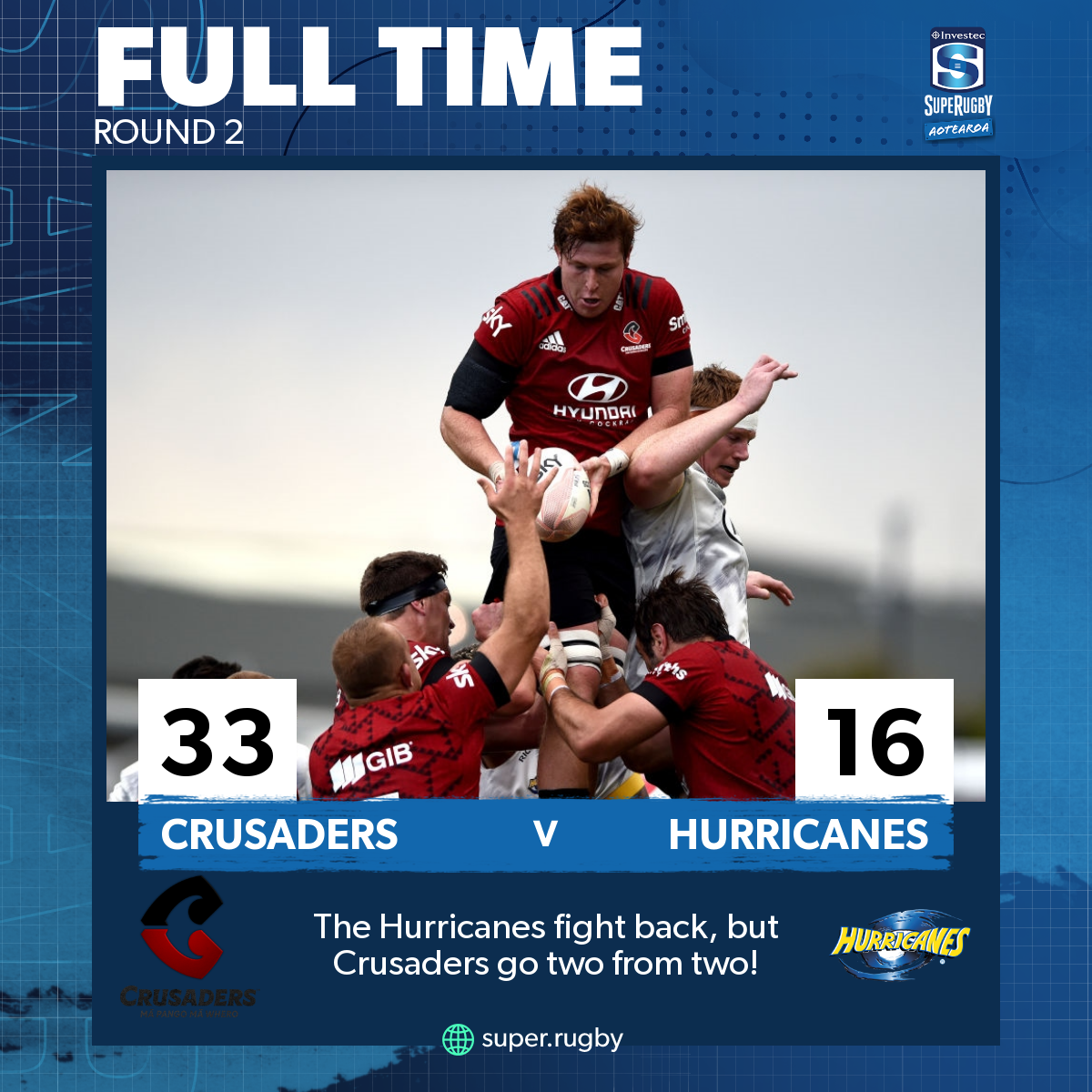