Seven-try Waratahs Too Good For Sunwolves

The Waratahs proved too strong for the Sunwolves as they claimed a deserved 50-29 victory in their Super Rugby clash in Tokyo on Saturday.

The visitors were full value for their win as they outscored the Sunwolves seven tries to four with Jake Gordon crossing for a brace and Bernard Foley finished with a 15-point haul courtesy of six conversions and a penalty.

The result means the Waratahs are now just a point adrift of the Melbourne Rebels at the top of the Australian Conference standings while the Sunwolves, who have lost all five their matches in the competition, are still firmly rooted to the bottom of the table.

The Sunwolves did most of the early attacking but it was the Waratahs who opened the scoring in the sixth minute courtesy of a Gordon try after Taqele Naiyaravoro laid the groundwork with a barnstorming run down the left-hand touchline in the build-up.

The home side did not take long to reply and five minutes later Michael Little crossed the whitewash after busting through tackles from Foley and Gordon inside the Waratahs' 22.

Both tries were converted but the Waratahs regained the lead in the 14th minute when Foley slotted a penalty after Little was blown up for an indiscretion at a ruck.

The Waratahs took control of proceedings as the half progressed and were leading 24-7 midway through the half thanks to well-taken tries from Curtis Rona and Will Miller.

Rona's effort was particularly impressive as he bamboozled the Sunwolves defence with an audacious dummy before crossing the whitewash.

The Sunwolves needed a response and they did that in style with Little once again prominent. The inside centre launched an attack from inside his 22 and set off on a 70 metre run before throwing an inside pass to Sam Wykes, who crossed for his side's second try.

That score reinvigorated the home side and they narrowed the gap in the 28th minute when Yu Tamura added a penalty after the Waratahs were blown up for straying offside on defence.

The visitors would finish the half stronger though and further tries from Gordon and Bryce Hegarty gave them a commanding 38-17 lead as the teams changed sides at the interval.

The Waratahs continued to dominate in the second half and five minutes after the restart Michael Hooper scored their sixth try off the back of a lineout drive deep inside the Sunwolves' 22.

To their credit, the Sunwolves fought back and in the 53rd minute Little got a pass out to Semisi Masirewa midway between the halfway mark and the Waratahs' 22 and the wing did well to beat Kurtley Beale with deft footwork before racing away to score his side's third try.

The Sunwolves upped the ante on attack but despite spending plenty of time inside the Waratahs' half, they could not add to their points tally during the next 10 minutes although they received a shot in the arm in the 65th minute when Hooper was yellow carded for a professional foul on defence deep inside his half.

Shortly afterwards, the home side made their numerical advantage count when Kazuki Himeno ran onto a pass from Yutaka Nagare before dotting down but the Waratahs would have the last laugh as Naiyaravoro secured their bonus point when he crossed for their seventh try in the 73rd minute. 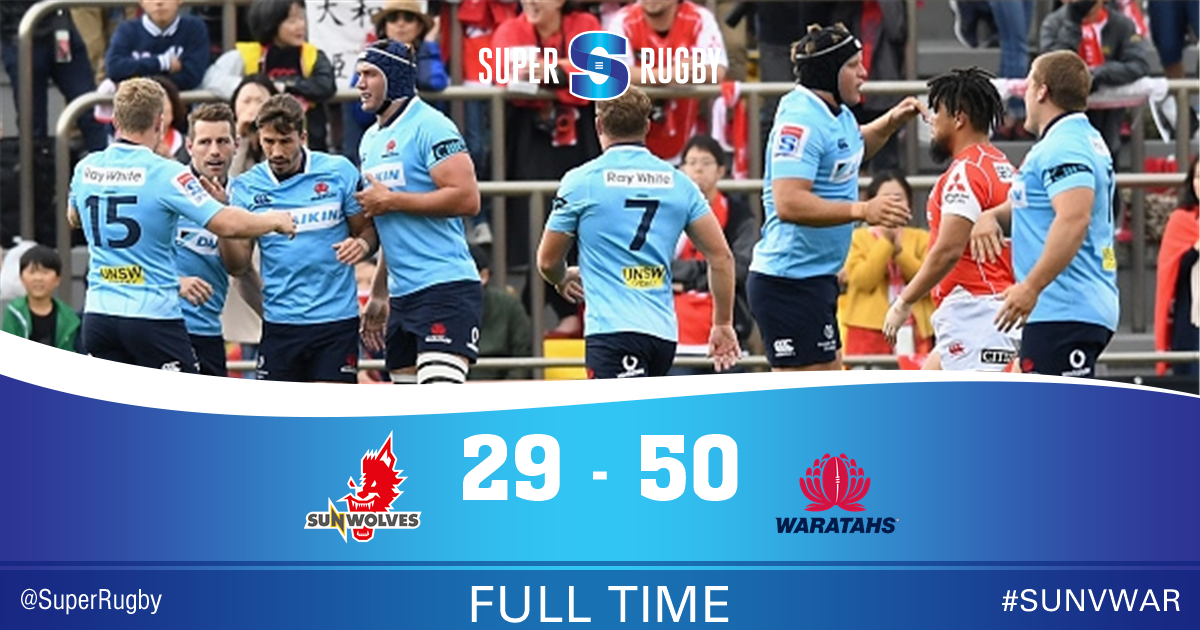