Sharks and Bulls settle for a draw

Joe Pietersen missed a simple penalty after the hooter to leave the Sharks and Bulls tied for a 16-16 draw at Loftus on Friday.

In a scrap of a South Africa derby punctuated by moments of class from the two fullbacks, Warwick Gelant and Willie le Roux, the boots of Francois Brummer and Pietersen were more influential when it came to putting points on the board.

Tian Schoeman's 79th-minute penalty for the Bulls looked to have sent the result heading for a draw until Marcell Coetzee won a penalty at the breakdown for the Sharks with time up to put Pietersen in position for the win.

But the flyhalf, whose form has been excellent off the tee this season, shockingly missed.

The Bulls led 13-3 at one stage just before half-time and enjoyed dominance upfront in the scrum, earning several penalties from referee Glen Jackson, before watching the Sharks overtake their tally on the scoreboard.

The Sharks, curiously wearing shirts without any numbers on the back, remain unbeaten after winning their first three matches, but Gary Gold and his coaching staff have plenty to work on.

Points were scarce in the opening quarter as Brummer and Pietersen traded penalties, both sides struggling with handling errors.

The Bulls always posed a threat however through Gelant as the full-back continually attacked space in the Sharks defence.

Brummer missed with his first attempt but he made no mistake second time around after the Sharks strayed offside for a 3-0 lead.

Pietersen's response was instant but the Sharks and their captain

Tendai Mtawarira were coming under immense pressure at the scrum, as the Springbok toiled up against Marcel van der Merwe.

A sweetly struck drop goal from the Bulls fly-half restored the lead for the hosts at 6-3 and building the pressure on the Sharks eventually paid off with a well-worked try.

Sharps hands between the Bulls backs released Gelant onto an inside pass and the full-back had too much speed to be caught, Brummer converting his try to give the Bulls a big ten-point lead.

Another missed shot from Brummer kept the Bulls’ advantage at that margin with Pietersen replying before the break, a booming long-range effort giving the Sharks some hope as the sides headed into half-time with the score at 13-6.

Looking to draw level the Sharks appeared set to score when JP Pietersen broke free into space, but his final pass was well intercepted by Gelant to clear the danger.

Once again Van der Merwe helped the Bulls pack crush the Sharks at the set-piece only for Brummer to miss once again.

The Sharks duly punished the Bulls with their first try, Le Roux the scorer after his long kick upfield was first met by Lwazi Mvovo, Le Roux supporting to mop up the loose ball to score.

Pietersen’s brilliant conversion drew the Sharks level and the fly-half put this side ahead for the first time with a penalty earned by the Sharks driving maul.

Le Roux and the Sharks came so close to scoring again only for the Bulls defence to force a knock-on with the line at their mercy, as the game threatened to open up with both sides chasing the win.

Schoeman’s strike then drew the Bulls level at 16-16, before Pietersen somehow failed to deliver with that straightforward penalty attempt. 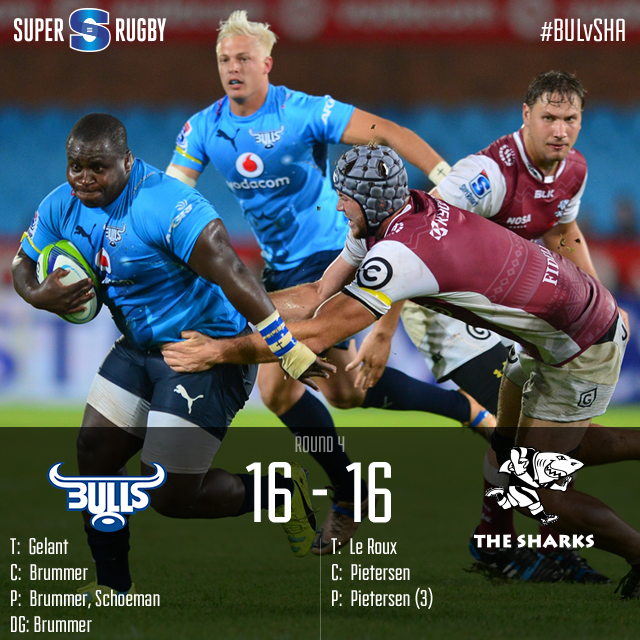