The Sharks ended a two-match losing streak when they secured a deserved 63-40 victory over the Blues at Eden Park in Auckland on Saturday.

The two sides gave the ball plenty of air throughout although, as the scoreline suggests, the game will never be used in defensive coaching manuals.

Both teams scored six tries apiece but it was superb goalkicking from Sharks pivot Robert du Preez which proved the difference between the teams and he eventually finished with a 38-point haul courtesy of seven penalties, six conversions and a try.

The win means the Sharks are now in joint second place along with the Stormers on the South African Conference table although that situation could change if the men from the Cape beat the Bulls later on Saturday. The Blues, meanwhile, are still firmly rooted to the bottom of the New Zealand Conference.

The Sharks held the upper-hand from the outset and opened the scoring in the third minute courtesy of a Robert du Preez penalty after Jerome Kaino infringed at a ruck.

The visitors continued to dominate as the half progressed and in the 11th minute Jean-Luc du Preez did well to get a pass out to his captain, Ruan Botha, who barged over from close range for the opening try.

Robert du Preez added the extras and made it 13-0 to the visitors when he slotted a penalty in the 16th minute after the Blues strayed offside on defence.

The Blues were soaking up the early pressure but opened their account in the 22nd minute with a superb try scored by Michael Collins.

This, after the home side started a counter-attack inside their half in which Stephen Perofeta, Rieko and Akira Ioane, Melani Nanai, James Parsons and Josh Goodhue all played prominent roles. They were soon close to the Sharks' try-line and the ball was shifted to Collins, who cantered in for the five-pointer.

Despite that try, the Sharks were still the dominant side and in the 26th minute Du Preez slotted another penalty after Parsons was blown up for offside play.

And in the 34th minute, Jean-Luc du Preez beat a couple of defenders on his way over the try-line after Andre Esterhuizen did well in the build-up with a powerful run.

Robert du Preez kicked the conversion and added a penalty in the 39th minute which meant the visitors held a commanding 26-7 lead at half-time.

The Sharks were on the backfoot early in the second half when, four minutes after the restart, Sbu Nkosi was sent to the sin bin for a high tackle on George Moala.

With a man down, the visitors were always going to struggle and two minutes later the Blues were rewarded when Moala found himself in space inside the Sharks' 22 and he did well to get a pass out to Akira Ioane, who dotted down in the left-hand corner.

That try saw the Blues upping the ante on attack and they were rewarded with two tries in two minutes from Patrick Tuipulotu and Perofeta. Tuipulotu's effort came after he burst through tackles from Botha and Esterhuizen, just outside the Sharks' 22, before outsprinting the cover defence on his way over the try-line. 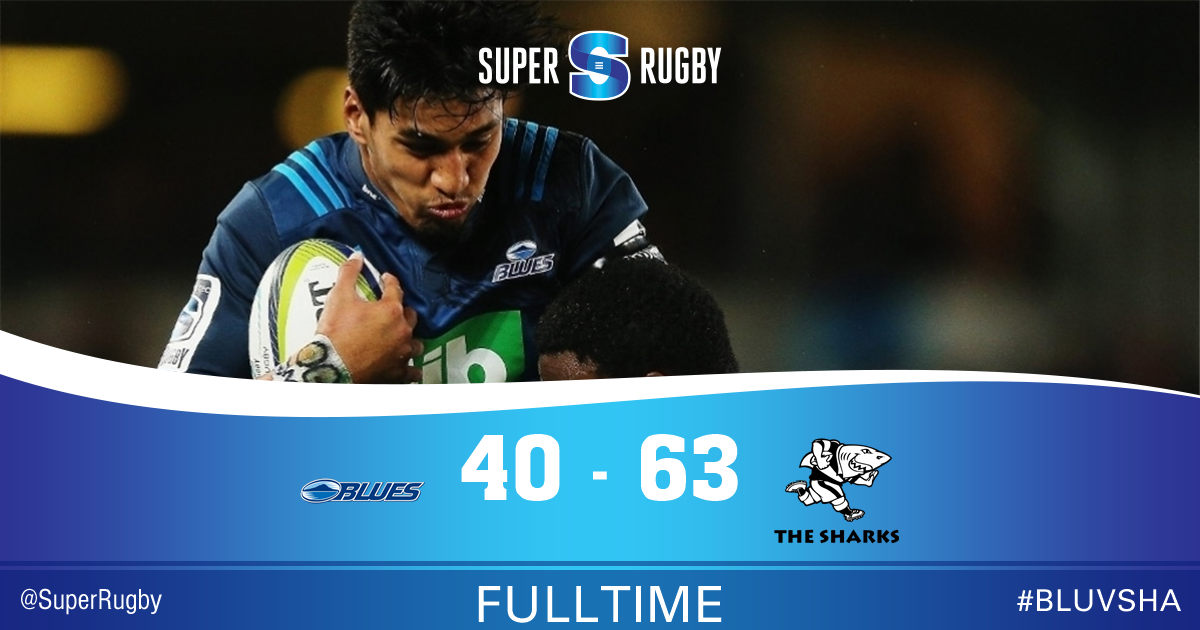 Perofeta's five-pointer was just reward after he pounced on a loose ball and beat five defenders on a mazy run before crossing the whitewash. His conversion meant the Blues were now leading 28-26 but the Sharks did not panic and regained the lead in the 57th minute when Tera Mtembu forced his way over for a deserved try.

Robert du Preez crossed the whitewash on the hour-mark and kept the scoreboard ticking with another penalty shortly afterwards before the Blues were reduced to 14 men when Jordan Trainor took Nkosi out in the air in the 65th minute.

Both sides continued to attack and the Sharks extended their lead via a Kobus van Wyk try and another penalty from Du Preez before Rieko Ioane narrowed the gap for the Blues with a well-taken try in the 75th minute.

The last five minutes was a frantic affair as both sides continued to run the ball from all areas of the field. Du Preez slotted his seventh penalty before the Blues replied via a try from Moala but the Sharks would have the last laugh courtesy of a try in injury time from Curwin Bosch.