The Sharks returned to winning ways with a 28-24 victory over the Chiefs at Kings Park in Super Rugby action in Durban on Saturday.

The Sharks dominated the game and should have won by more were it not for a number of handling errors and them gifting the Chiefs’ two easy tries.

But the men from Durban can be proud as they have now won three of their four matches against New Zealand opposition this season, adding to their victories over the Highlanders and Blues as well as the narrow one-point loss to the Hurricanes.

Meanwhile, the Chiefs’ longest winning streak in South Africa which spanned three games was broken, but they remain on course for a play-off spot, as they still occupy sixth spot, having claimed a crucial losing bonus-point here with Solomon Alamailo’s try after the full-time hooter. 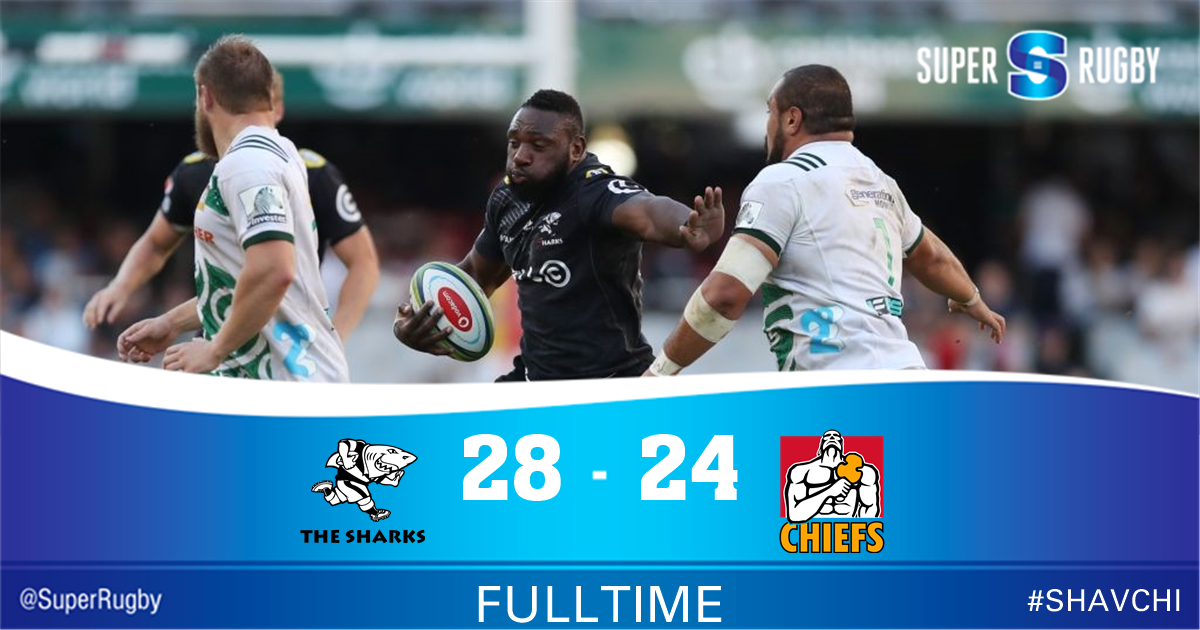 The Sharks started well and were rewarded with the game’s first try after excellent interplay between backs and forwards saw fly-half Robert du Preez finishing off a superb team try.

But the Chiefs hit back five minutes later. After Sharks flank Jean-Luc du Preez was penalised for going off his feet, Chiefs fly-half Marty McKenzie put the ball in to the corner. The Sharks defence was caught unawares as the ball was thrown to the back of the line-out where Tyler Ardron was on hand to receive hooker Liam Polwart’s long, accurate throw to crash over the line.

Phillip van der Walt was then penalised for a high tackle with five minutes to go in the first-half and McKenzie made no mistake with the three-pointer, as the sides went into the interval locked at 10-10.

The Sharks began the second half as they started the first, immediately advancing up the field with incisive build-up play as Sbu Nkosi was halted a couple of metres out. The ball was recycled and quickly spun out to the left through the hands where Lwazi Mvovo was on hand to round the Chiefs defence for the easy run-in.

However, the Sharks would have been kicking themselves moments later when Chiefs captain Charlie Ngatai was gifted a simple intercept try thanks to Sharks centre Andre Esterhuizen’s errant pass.

But the home side would hit back once again as their scrum began to turn the screw, forcing the Chiefs’ knock-on at the back of the set-piece. It was another impressive shove from the Sharks from the resulting scrum, allowing Cameron Wright to go in under the posts with a sniping dart. Du Preez’s conversion made it a 25-17 lead.

However, Alamailo secured the crucial losing bonus-point for his side with a try after the hooter as he showed searing pace to burn Wright and fly-half Du Preez down the left-hand touchline to leave a slightly sour taste in the Sharks players’ mouths.