The Sharks progressed to the Super Rugby play-offs at the expense of the Rebels as they saw off the Jaguares 20-10 at Kings Park on Saturday.

They will now face the table-topping Crusaders in Christchurch next week thanks to crossings from Akker van der Merwe and Kobus van Wyk.

The Jaguares, who travel to the Lions in their qualifier, scored through Sebastian Cancelliere, with Joaquín Díaz Bonilla kicking five points.

Entertainment was lacking in the opening half in Durban as the wet weather did not help the match as a spectacle. Throw in the Sharks only needing four points and the Jaguares being largely second string and it had all the ingredients of being a sluggish and fragmented contest.

The Sharks went 3-0 up on nine minutes when a huge scrum gave Robert du Preez the chance to strike. He made it 6-0 seven minutes later.

But the hosts were reduced to 14 men on 19 minutes when number eight Dan du Preez was yellow carded for a low, no-arm tackle. Diaz Bonilla made no mistake from in front as the Jaguares cut the lead in half. There was maybe a temptation that they should have chanced their arm.

And being conservative did come back to haunt them two minutes later as Sharks hooker Van der Merwe raced over from close to 40 metres out after popping out of a maul, showing good pace. Fly-half Du Preez added the extras to make it 13-3 which was how it remained going into the interval, after the Jaguares went agonisingly close to reducing the margin when Matias Moroni grounded the ball dead after a chase through.

The Sharks came out for the second-half looking to apply the squeeze and that they did but for no reward. After a series of shots at goal being snubbed Du Preez's effort from out wide after a strong scrum struck the upright. The hosts, however, did seem likely to strike soon.

That they did on 53 minutes when, from a lovely set-piece move that started on halfway, Andre Esterhuizen put Van Wyk through and he raced over on the right wing for a superb finish. This time Du Preez made no mistake from the kicking tee as the Sharks held a 20-3 advantage.

The Jaguares did not roll over however and finally crossed on 66 minutes when a backline move on halfway led to the ball being kicked back inside for the chasing Cancelliere to gather and ground. Diaz Bonilla added the conversion to make it 20-10 and cause the Sharks to sweat.

They need not have worried though as 20-10 was how the game finished as the Sharks now pack their packs and head to Christchurch next week, consequently ending the Rebels' season. 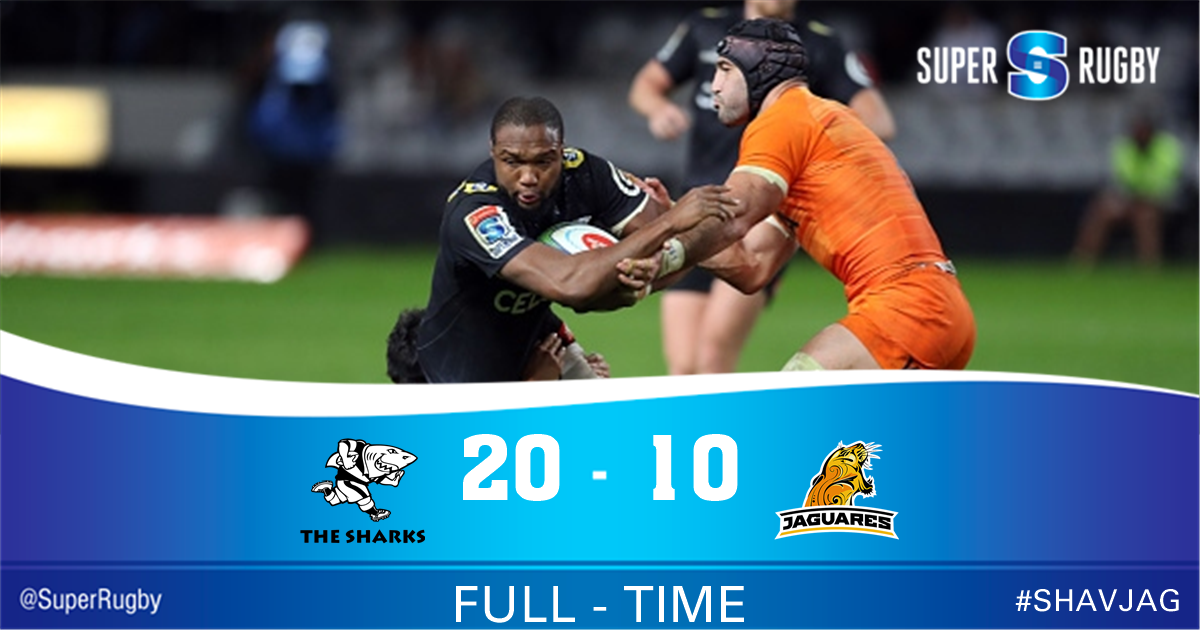