The Sharks got their season off to a solid start as they secured a comfortable 45-10 win over the Sunwolves in Singapore.

The Sharks, rated as one of the fancied teams for 2019, outscored the Sunwolves six tries to one.

The South Africans had a slow start but the Durban-based franchise’s quality and slow poison tactic made sure they dominated proceedings.

Akker Van Merwe scored a brace of tries, while, flyhalf Robert du Preez produced a flawless performance with the boot, kicking five conversions and a penalty for 100 percent success rate.

The Shark took the early 3-0 lead after a successful penalty kick by Robert Du Preez Jnr.

In contrast to the visitors’ conservative approach, Sunwolves showed their intent on attack and was rewarded when flyhalf Hayden Parker’s chip kick was neatly collected by South African Shane Gates, who made sure to cross the chalk for the try.

Hayden added the extras two points with a successful conversion, 7-3. The flyhalf again stepped up to extend the Sunwolves’ lead with a penalty kick, 10-3.

Despite the seven-point deficit, the Sharks always looked like they were in control and levelled matters just short of the 20th-minute mark courtesy of Van der Merwe, who burst over the line from the back of a line-out drive.  R. Du Preez added the extras leaving it 10-all.

Before the break, Sharks started to find their feet and ended the first half with two answered tries. First Dan du Preez bulldozed his way over the line after yet another maul. Then, some great interchanging play by the backline saw Sibusiso Nkosi stroll over the line for the converted try.

Sharks took a comfortable 24-10 lead at the break.

The Sunwolves started the second in a similar attacking fashion, the side produced multiple onslaughts, however, they failed to break the Sharks’ solid defensive wall.  And to add salt to wound Rene Ranger – one of the Sunwolves’ best performance – went down clutching his knee, the wing left the field on the stretcher.

The Sharks soon took advantage as Lukhanyo Am set up wing Makazole Mapimpi for the five-pointer in the corner. R Du Preez added the extra for the 31-10 lead.

With a comfortable lead, Sharks introduced Jeremy Ward as a replacement for Springboks Andre Esterhuizen.

The tempo of the match took a massive dip which played in the Sharks’ favour. The visitors continued to utilize their set-piece which placed enormous pressure on the Sunwolves – evident in flank James Moore’s yellow card in the 60th minute.

The Sharks continued to enjoy possession inside the Sunwolves’ 22 and courtesy of another great driving maul, hooker Van der Merwe burst over the line for his second try of the match. R Du Preez added the conversion – his last action of the match before being replaced by Rhyno Smith.

To round of solid performance, the Sharks replacement Ward strolled over the line for the sixth try. Rhyno Smith added the extra two points for the easy 45-10 win.

Man of the match: Sharks Sibusiso Nkosi was extremely impressive on attack, the wing made several carries, while Lukhanyo Am also deserves a mention. Flyhalf Robert Du Preez flawless kicking stat also made him a noteworthy contender for the awards. However, our nod goes to Sharks Armand van der Merwe, the hooker was relentless on attack scoring two tries and in defence he made solid tackles. 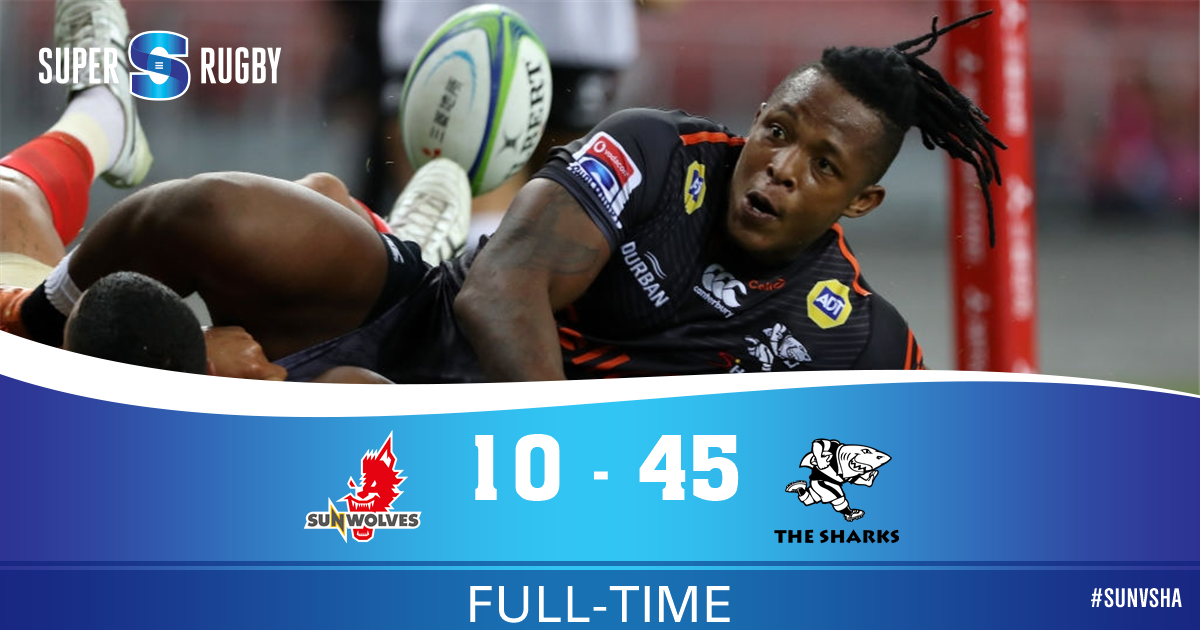