The Sharks secured a convincing 38-12 bonus-point victory over the Highlanders in Super Rugby action at Kings Park in Durban on Saturday.

With the victory, the Sharks have ended the Highlanders' proud recent record in South Africa, which had seen the Otago outfit win their last five regular-season games on the bounce in the country.

No one predicted this scoreline but that is what you get from the mercurial Sharks, brilliant the one week and abject the next. The Highlanders remain in third position in the New Zealand Conference with the Chiefs missing an opportunity to move above them, having slipped up against the Jaguares.

The Sharks continue their fine record at home, which has seen them lose only one of their five matches in Durban. On their day they have shown they are capable of beating anyone but are still too erratic, blowing hot the one week and cold the next. However, they are still in eighth position in the overall standings and on course for a quarter-final berth.

The Sharks made a dream start, dotting down after just 38 seconds when Ruan Botha brilliantly snatched Cameron Wright's box-kick out of the air and fed Akker van der Merwe on his inside with the one-handed pass as the hooker sprinted away under the posts to grab his second try of the season.

And the home side had their second only six minutes later when prop Tendai Mtawarira made the half-break, offloading to fly-half Robert du Preez who found Makazole Mapimpi on the overlap, the winger bouncing off Highlanders fly-half Lima Sopoaga to finish clinically in the left-hand corner. The Sharks pivot added the extras for a 14-0 lead.

But the Highlanders had a response and it came in the 27th minute after they had worked themselves close to the try-line with a well-worked driving maul before flank Dillon Hunt peeled off the back and crashed over to cut the deficit in half.

Soon after, Sharks number 10 Du Preez extended the lead to 10 with a three-pointer after Mtawarira had outmuscled his opposite number at the scrum to win the penalty and ensure the home side took a 17-7 lead into the interval.

The Sharks started the second half as they had begun the first, taking the game to the Highlanders with fast-paced high-intensity rugby and were rewarded with their third try in the 43rd minute.

A long ball from fly-half Du Preez was tapped back inside for the onrushing Lukhanyo Am to cut through the Highlanders defence like a hot knife through butter before playing the final pass on his inside for number eight Dan du Preez who showed good support play to dot down for his first try of the season in the 43rd minute. Robert du Preez slotted the conversion between the posts for a 24-7 lead.

With 20 minutes to go, the Sharks scored a scintillating try with Sbu Nkosi profiting from a sublime grubber kick through by Robert du Preez to dive onto the ball just before the dead-ball line for the bonus-point score.

It was going to be hard to emulate their two tries previous, but the Sharks managed to do so with a brilliant fifth. Curwin Bosch collected a high kick and stepped his way brilliantly past a host of Highlanders defenders throwing a no-look pass which was excellently snaffled by fly-half Du Preez who capped an impressive individual performance with a try. Du Preez's conversion made it 38-7 with just over 10 minutes to go.

The Highlanders scored a consolation try six minutes from time. It was Ben Smith who scythed through the Sharks defence and played a brilliant long pass to set up Teihorangi Walden for the easy run-in to the line.

But the Sharks would ensure their bonus point would not be snatched away from them with no further scores as they closed out a 38-12 victory. 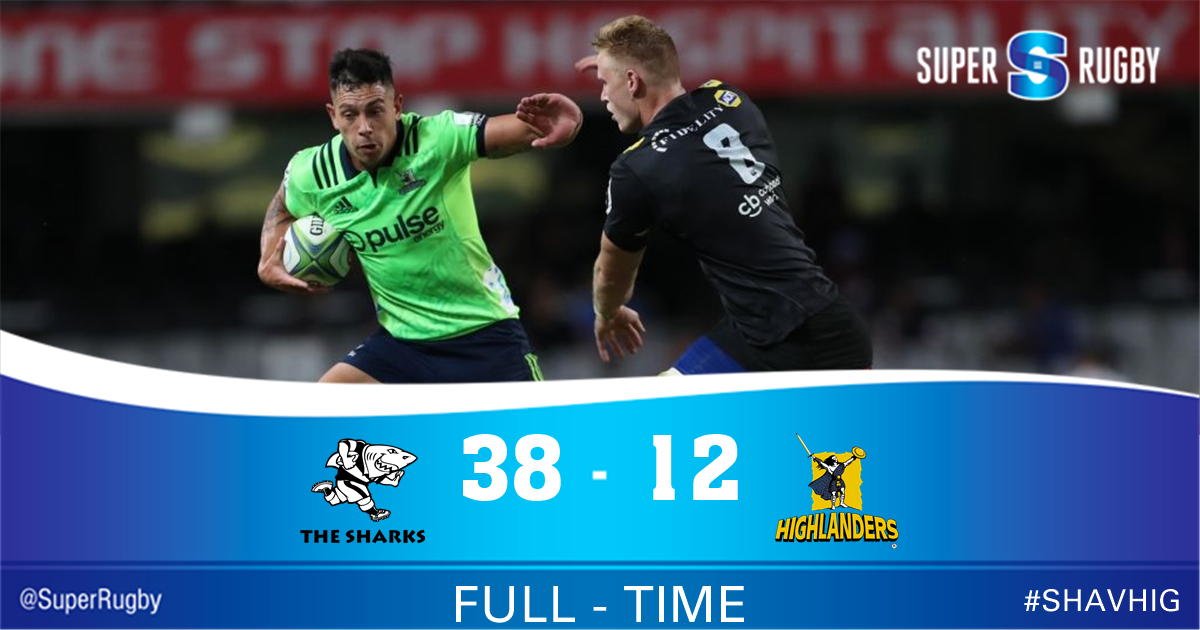