The Sharks continued their impressive home form with a 37-12 victory over the Western Force at Kings Park, Durban on Saturday.

Tries from Jeremy Ward, Jean-Luc du Preez, Curwin Bosch and Lukhanyo Am ensured victory for Robert du Preez's men as scores from James Verity-Amm and Marcel Brache proved too little for the Force.

The Sharks grew into the match more and more as time passed and could have scored more tries if truth be told were it not for some elementary handling errors.

The home side will be disappointed not to have got the crucial bonus-point as it was definitely on the cards and thus remain 10 points behind the Lions.

The Sharks are now unbeaten in their last nine games on home soil and consolidate second position in the Africa Conference 2 standings.

The last and only time the Force have won against the Sharks is way back in 2007 and their only wins of the season have come in Round 2 against the Reds and Round 7 against the Kings.

Bosch dispatched two early penalties to give the Sharks a 6-0 lead within the opening 15 minutes in what was a cagey opening with both sides opting for a tactical kicking game.

The Force began to enjoy the majority of possession but couldn't convert their opportunities into points. The Sharks conceded a penalty for a premature engagement at a five metre scrum which they had the put-in to. The Force opted for a scrum from the penalty but Ian Prior was guilty of knocking the ball on when the Force had good front foot ball.

Now it was a Sharks scrum from the knock-on and they almost scored from it. They swung the ball out onto the left wing where Sbu Nkosi produced a magnificent step as he thought he had scored on his debut. However, the TMO confirmed that Bosch had knocked the ball on a few phases before.

But it was Free-State born Force winger Verity-Amm who got the first try of the match in the 26th minute. An exquisite backline move from the Force resulted in Verity-Amm breaking the line and putting on the afterburners to coast clear and dot down as the Force went into a 7-6 lead after Ian Prior converted.

The Force continued to give away too many penalties as the game neared the interval. They were reduced to 14 men when Curtis Rona was yellow-carded for repeated offside infringements. The Sharks' rolling maul was brought down just before the try-line but they finally got their try when Ward stepped inside to crash over in the 37th minute.

They managed to get one more before the half-time whistle. Am collected his own grubber kick in a moment of magic before passing inside to Du Preez who dotted down. Bosch converted to send his side into the interval 20-7 up.

The Sharks got their third after Ward did exceptionally well to keep the ball in play grubbering the ball through for Bosch to race onto and dot down in the 56th minute. Bosch converted his own try to extend the lead to 30-7.

Force full-back Brache pulled one back for his side after a wonderful long pass from Jono Lance meant all the South African born utility back had to do was use his pace and get over in the corner.

The Sharks responded almost immediately when Am burgled the ball with an opportunistic intercept to race clear and dot down as substitute Patrick Lambie converted to extend the lead to 37-12. And that's how it remained until the final whistle. 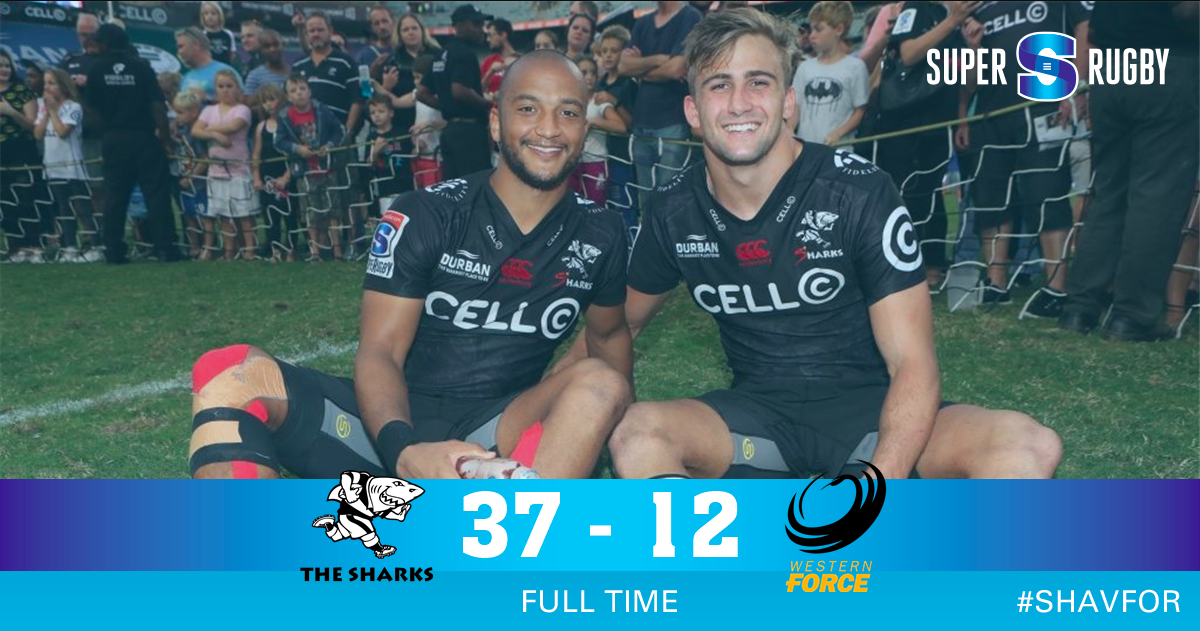