Sharks see off Lions in Durban

The home side settled down first after a niggly and tense start to the match that was full of errors.

In between a series of aimless kicking and seemingly constant knock-ons whenever either side started to get any momentum, Curwin Bosch seemed to have forgotten his goal-kicking boots at home as he missed a sitter in the 14th minute.

Thankfully he wouldn't have to dwell on the mistake for too long as his side crossed the whitewash just four minutes later. Bosch redeemed himself fully by sniping an interception in the middle of the park and raced a full 50 meters to dot the ball down under the polls and knocked over the conversion himself.

They continued to dominate proceedings and had another try in the 25th minute. After setting up a lineout close to the visitors try line, they initiated an unstoppable driving maul and Dan du Preez was driven over the line. Bosch, having now found his kicking boots somewhere, added the extra two points to make it 14-0.

In typical South African derby fashion, though, the Lions would not go quietly into the night and fought back well.

Seven minutes before half time they were rewarded as a beautiful backline moved between Courtnail Skosan, Elton Jantjies and Lionel Mapoe ended with the latter going over for the try. Jantjies converted to bring the score to 14-7 at half time.

Immediately after the break, the Sharks thought they had scored again through Sibusiso Nkosi, but video replays showed he had a foot in touch before grounding the ball and the score was chalked off.

The Lions pounced on their deflated hosts with Aphiwe Dyantyi bursting down the left wing with the help of Skosan to set up a ruck situation in a dangerous position. The ball was recycled quickly and spread to Mapoe, who offloaded for Cyle Brink to score a wonderful team try. Jantjies conversion brought the teams level at 14-all.

Bosch added a 54th-minute penalty to restore a fraction of his side's lead before yet another interception allowed them to grab hold of the game once more.

The visitors were looking dangerous on the attack and had a lineout on the Sharks' five-meter line, but it was overthrown and Makazola Mapimpi grabbed it gratefully before dashing a full 95-meters to score the try. Bosch's conversion stretched their lead to 24-14.

A missed penalty from Jantjies moments later did not help the situation.

The Lions thought they were back in the game properly in the 74th minute when Reinhard Nothnagel got over the line, but the TMO ruled he was off his feet when he played the ball. They were playing with penalty advantage though and Jantjies was able to kick the goal this time around.

In a cruel twist of fate though, the Sharks then marched straight down the other end of the pitch and earned a penalty of their own, which Bosch slotted to restore their 10-point lead and secure a hard-fought and well-deserved 27-17 win. 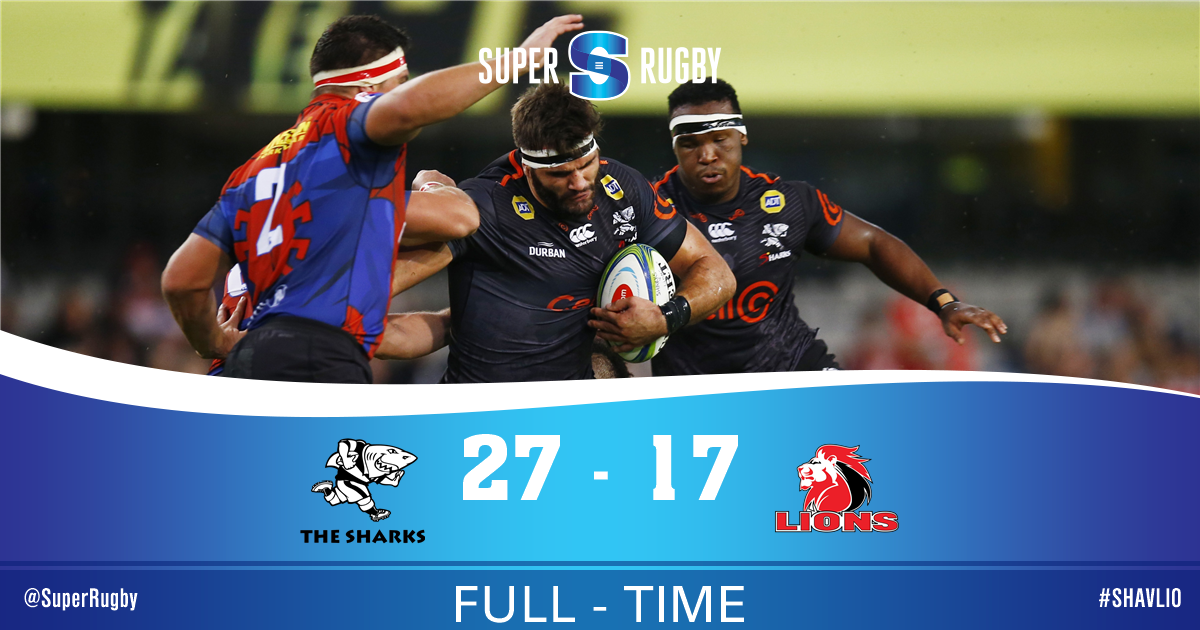