The Sharks disappointed for the second week running as they lost 21-14 to the Reds in Friday's Super Rugby clash at Kings Park.

The Reds moved provisionally second in the Australian Conference after they beat a disappointing Sharks side 21-14 at Kings Park on Friday.

Bryce Hegarty, Chris Feauai-Sautia and Tate McDermott’s tries saw them to victory, as the Sharks missed a chance to go top in South Africa. Their tries came via Kerron van Vuuren and Dan du Preez as the hosts struggled for any real fluidity and made numerous errors both in attack and defence.

The Reds went into the interval leading 14-7 thanks to Hegarty and Feauai-Sautia’s tries, with Van Vuuren hitting back for the home team.

Brad Thorn’s side didn’t take long to hit the ground running as on three minutes a line break from hooker Alex Mafi led to quick recycled ball and Hegarty then spotted a hole and backed himself from 20 metres out for the opener. He slotted the simple conversion for a 7-0 lead.

The Sharks had chances to chip away at that buffer but instead opted for the corner, which did not result in points as the contest wore on.

It backfired too as the Reds soon doubled their lead on 20 minutes, Samu Kerevi’s bust then seeing him offload to Feauai-Sautia for a try.

Fortunately for the Sharks they did respond before half-time as a line-out drive saw Van Vuuren get over and while they had further chances which weren’t taken late on in the half, the hosts would still fancy their chances of turning things around in front of their Durban fans.

It had looked as though neither side would trouble the scoreboard in the opening 20 minutes of the second period in an error-strewn spell, but the Reds then finally clicked with offloads aplenty down the right seeing Hegarty and Scott Higginbotham combine to put McDermott over.

That converted try moved the Reds into a 21-7 lead and with the Sharks making error after error in attack, it seemed an away win was likely.

So it proved as despite a late try from Sharks number eight Du Preez off the base of a scrum, the Reds would hold on for a rare win in Durban. 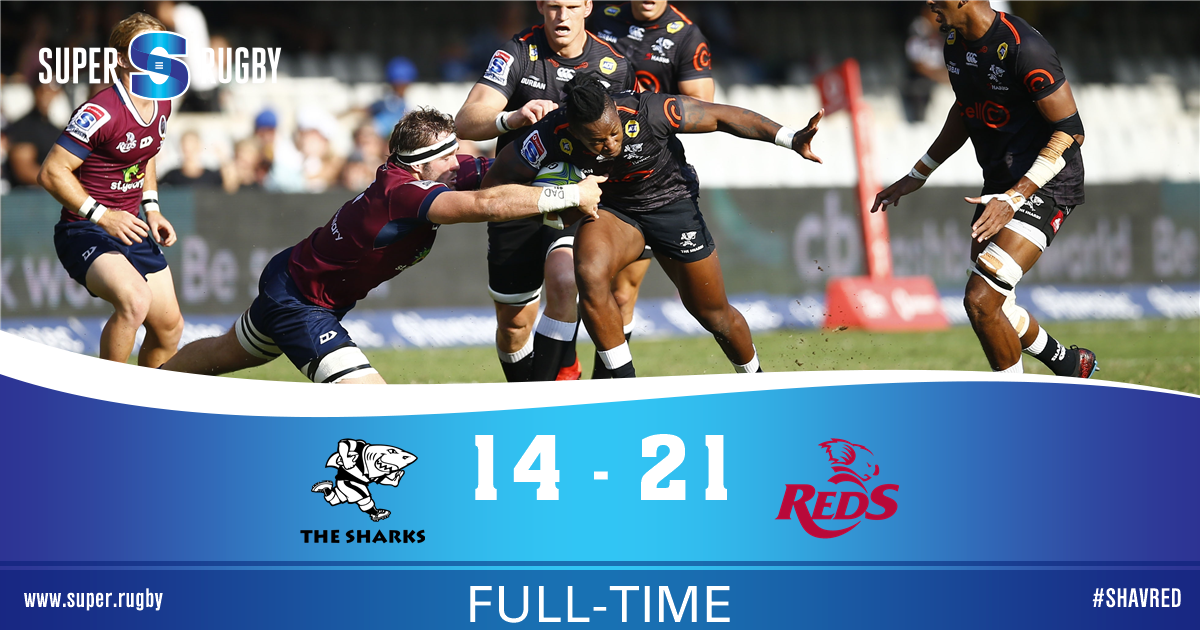