The Sharks ran eight unanswered tries past a hapless Kings outfit to win 53-0 in their Super Rugby clash in Durban on Saturday.

The homeside were in a rampant mood with Springbok fly-half Pat Lambie continuing with his fine form, since returning from a lengthy injury lay-off a couple of weeks ago, with a 23-point haul via a brace of tries, five conversions and a penalty.

The win is an important one for Gary Gold's men as it keeps them in touch with the Lions at the top of the Africa Conference Two standings, two points adrift of the Johannesburg outfit, who have played a match less.

There was little positive to report about the Kings, who are firmly rooted at the bottom of Africa Conference Two with just one victory from 11 matches.

The groundwork to the Sharks' triumph was laid in the first half when they scored six of their tries with Lambie prominent as a playmaker and he opened the scoring as early as the eighth minute when he got over in the left-hand corner, after running onto a pass from Paul Jordaan.

Five minutes later, Lambie added a penalty before he turned provider for Jordaan, after pouncing on a mistake by the Kings deep inside the visitors' 22.

Lambie gathered a wayward Ntando Kebe pass and set off towards the tryline but did well to offload to his pacier team-mate, who got over for his side's second try.

The rest of the half was a one-sided affair with Willie le Roux, Jordaan Andre Esterhuizen and JP Pietersen all crossing the whitewash during an impressive period of play for the hosts.

The second half started brightly for the Sharks when Lambie found himself in the clear down the right-hand touchline and he showed the visitors' cover defence a clean pair of heels before crossing for their seventh try.

Although that score settled the result, the KIngs didn't raise the white flag and they did well to prevent the Sharks from adding to their lead for the next 30 minutes.

The Sharks eventually laid the final nail in their visitors' coffin, and notched their half century of points, in the 76th minute when Thomas du Toit barged over for a deserved try from a ruck close to the Kings' tryline. 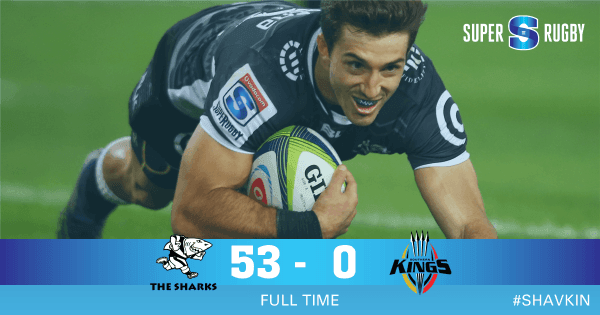