The Lions got back to winning ways with a 42-24 victory over the Brumbies at Ellis Park in Super Rugby Round 14 action on Saturday.

Having lost their previous three encounters, the win comes as a welcome relief for Lions supporters, who would have been concerned by their recent slump.

The Brumbies, meanwhile, have lost their last five games in a row – the last time they went on a longer losing streak was a five-game drought in 2011.

The Brumbies got off to an excellent start, taking the ball through the phases before full-back Tom Banks got on the outside of Elton Jantjies and had the pace to make it all the way to the line and dive over in the right-hand corner, despite an attempted last-ditch diving tackle from Madosh Tambwe. 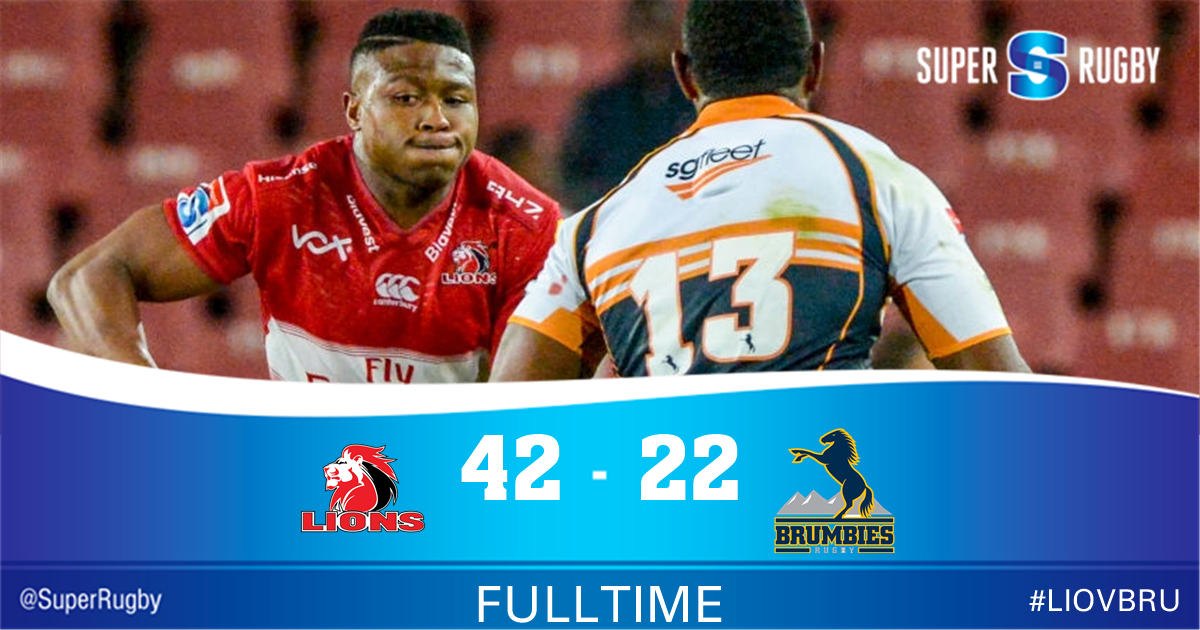 But it was the Lions who dominated the territory and possession stakes and had to wait patiently until the 10th minute to get their try as Jantjies’ inside ball was run on to at some pace by Rohan Janse van Rensburg, who bashed his way through the Brumbies’ defence as the powerful centre showed great upper body strength.

As if to emulate Janse van Rensburg, Tevita Kuridrani burst over the whitewash on the ocassion of his 100th Super Rugby appearance, running on to a flat Joe Powell pass with unstoppable momentum. Christian Lealiifano added the extras for a 14-7 lead with 16 minutes gone.

The Brumbies would finish the first half with 14 men as Rory Arnold was given his marching orders for cynically collapsing a Lions’ maul that had travelled 15 metres. The Lions would not be denied from the resulting maul, however, as hooker Robbie Coetzee was the man to claim the honours. Jantjies’ conversion equalled the scores with 10 minutes left in the first half.

Lealiifano would restore the Brumbies’ lead shortly afterwards with a penalty after the Lions were penalised for not rolling away. However, the Lions would have the last laugh of the first half as Ruan Dreyer went over at the back of another well-worked driving maul. Jantjies converted as the hosts took a 21-17 lead into the interval.

The Lions controlled proceedings after the break, going through phase after phase, but were denied by some heroic Brumbies’ defending.

Having soaked up the pressure, the Brumbies went up the other end with Banks grabbing his brace, the full-back running a brilliant line from a clever Lealiifano reverse pass and breaking the tackle of substitute flanker Marnus Schoeman to cross the whitewash.

Brumbies lock Arnold, who had been yellow-carded earlier in the match turned villain once again, this time receiving a red card for a tackle to the jaw of Jantjies with force.

Soon afterwards, the Brumbies were down to 13 men when Sam Carter was sin-binned for illegally entering the maul from the side. From the resulting penalty, the Lions set up the line-out and unsurprisingly went for the driving maul, taking advantage of their weightier pack due to the numerical disadvantage. This time, replacement Schoeman was the man revealed as the try-scorer.

The home side began to show a ruthless touch as Shaun Reynolds got in on the act, scoring his first Super Rugby try after excellent build-up play over 14 phases with the Lions choosing the perfect time to go wide.

The icing was on the cake shortly afterwards when Jantjies’ deft chip kick bounced favourably for Ruan Combrinck, who got the offload away brilliantly for lock Lourens Erasmus to finish.