The Rebels got back to winning ways with a comprehensive 46-14 victory over the Sharks at AAMI Park in Super Rugby action in Melbourne on Friday.

Having had their three-match winning streak halted by the Waratahs last week, the Rebels got their campaign back on track in emphatic fashion, recording their highest tally against South African opposition.

It is their first victory against the Sharks after two losses and a draw.

The Rebels have won their last three games on home turf, the last time they won more was a four-game glut from April to June 2015.

The Rebels began the stronger of the two sides and took an early 3-0 courtesy of a Reece Hodge penalty. They were rewarded for their dominance with the game's first try in the 12th after Jack Debrezeni put in an excellent cross-field kick which enabled Marika Koroibete to push Sharks wing Sbu Nkosi into touch.

From the resulting lineout, Rebels hooker Anaru Rangi was able to go straight through the back of the maul and over. Hodge made no mistake with the conversion.

In the 17th minute, the Sharks were reduced to fourteen men for ten minutes when Curwin Bosch was yellow-carded for knocking down Jack Maddocks' pass which would have allowed Koroibete an easy run-in.

After a poor start to the game in which their ball was laboured and line speed even slower, the Sharks finally got their act together when they scored a fantastic team try.

Lukhanyo Am made the break before a series of short passes and offloads between backs and forwards saw the ball eventually arrive in Lwazi Mvovo's hands, the winger showing impressive strength to haul a couple of defenders with him over the line. Fly-half Robert du Preez added the extras to cut the deficit to three at 10-7 with half an hour gone.

Eight minutes later and just two minutes before half-time, Amanaki Mafi got on the scoresheet, going over at the back of a well-worked driving maul. Hodge missed the conversion as the Rebels took a 15-7 lead into the interval.

The second-half was a much more one-sided affair, with the Rebels grabbing the tie by the scruff of the neck.

Debreczeni extended the lead five minutes after the break to 18-7 with a penalty after Sharks scrum-half Louis Schreuder was penalised for offside at the scrum.

After the Rebels had a five-metre attacking scrum in the 55th minute, they went for the line and won a short-arm penalty. Scrum-half Will Genia first played a pop pass for Richard Hardwick who was halted inches short. From the ruck, Genia made a sniping break and managed to get the ball down. Debreczeni's conversion took the home side out to a 25-7 lead.

With a quarter of the match to go, the Rebels were rewarded for a fantastic passage of play with their fourth try. After excellent work by Mafi and Genia at the breakdown securing the turnover, Genia spun the pass out right to captain Adam Coleman, who made an incisive break.

It went through the hands before the ball eventually spilled loose and Billy Meakes did well to react quickest, before showing good upper body strength to power his way over the line despite the attentions of three Sharks defenders.

Soon after, the icing was well and truly put on the cake when relacement prop Fereti Sa'aga made an exceptional line break with nothing on before playing the final pass for Ross Haylett-Petty to coast in under the posts. Debreczeni's conversion made it 39-7.

With five minutes to go, April held the ball up well, before playing a pop pass for Marius Louw who ran the perfect line to break through and dot down for his second.

But it was only a consolation try, as the Rebels added to their tally with a late Sa'aga five-pointer to run out 46-14 winners. 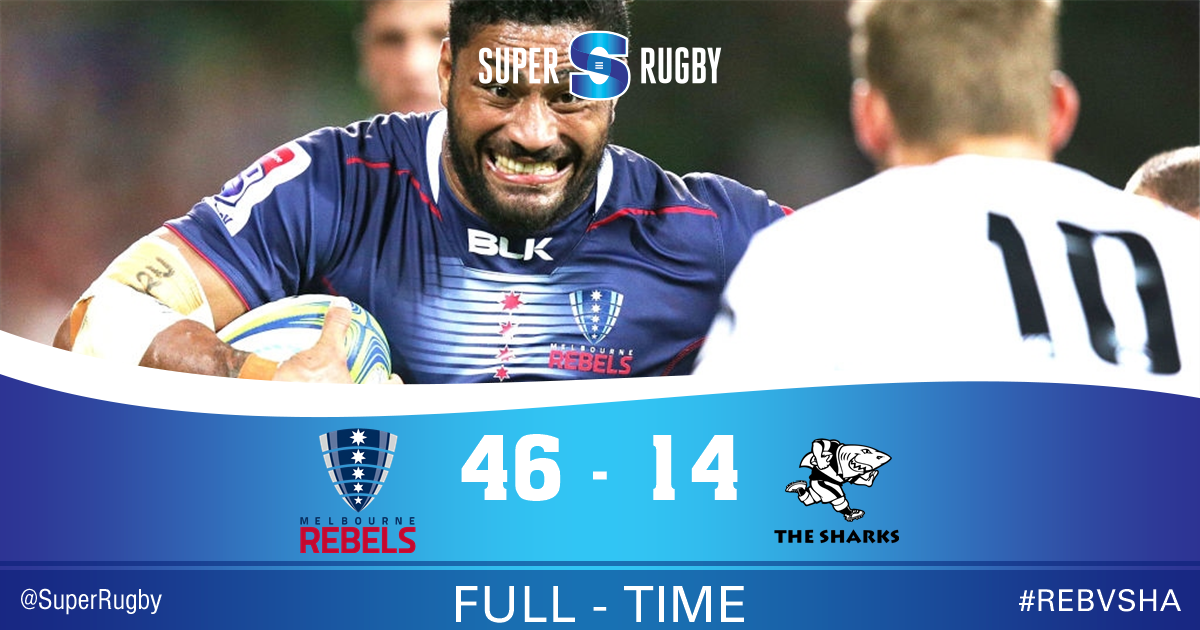