The Sharks bounced back from their humbling at the hands of the Bulls with a 42-19 victory over the Phakisa Pumas at Mbombela Stadium in Nelspruit on Saturday.

Manie Libbok, Madosh Tambwe, Dan Jooste, Sbu Nkosi and Kerron van Vuuren (2) got on the try column for the Sharks, while Francois Kleinhans and Erich Cronje (2) dotted down for the hosts.

The Sharks opened their account in the third minute. The move started at the breakdown and then they charged forward in numbers. Libbok was involved in initiating the move and he later got the inside pass from Marius Louw, sending him through to finish off.

The visitors were bossing proceedings and had their second with a quarter of an hour gone. After the Pumas looked to force them back with the territorial kicking game, Tambwe ran it straight back at them with the Pumas making it far too easy for him to weave himself all the way through for the try.

And four minutes later, it was 21-0 as the Durban-based side dotted down for the third time. From the lineout maul in the corner, they drive the ball all the way over with Jooste the man to profit.

Shortly before half-hour mark, the Pumas finally got themselves in to the game with their first five-pointer. Sharks prop Meyer conceded a scrum penalty and the Pumas set up the lineout, with Kleinhans spinning over after peeling away from the maul.

With just a minute gone in the second half, the Sharks moved the ball out wide to Nkosi, who went over in the corner. The move started with a strong drive and finished with the Springbok speedster profiting.

The Pumas hit back in the 55th minute. They worked the ball out wide and then Ettiene Taljaard passed inside for Cronje to finish.

The Sharks went down to 14 men in the 64th minute when scrum-half Sanele Nohamba was given a yellow card but despite their numerical disadvantage, Sean Evert's side grabbed their fifth through Van Vuuren after a strong drive from the forwards.

Three minutes later, the home side had their third. Scrum-half Ginter Smuts threw a superb pass to Cronje, who went over in the corner for his brace. But the Sharks just kept coming at the hosts and put more gloss on the scoreline when Van Vuuren went over for his second from another superbly executed rolling maul. 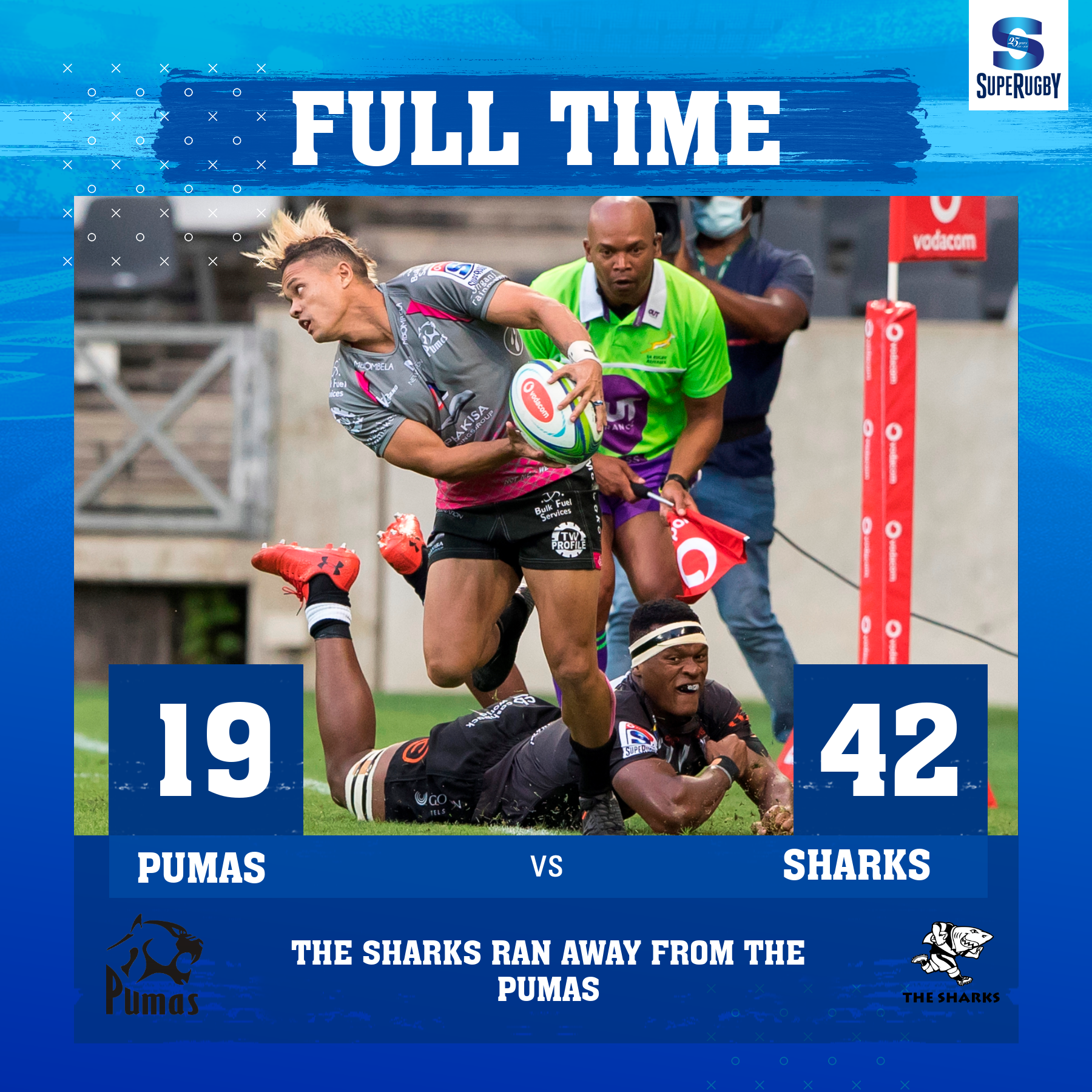