We have punched the numbers and select our South African team of the last decade based on statistical facts and figures...

There has been no South African Super Rugby champions since the Bulls in 2010 but there have been five instances of losing finalists. This includes the Lions heart-breaking three-in-a-row losses in 2016, 2017 and 2018.

The Lions are well represented with six players in the team of the decade. Three of them are behind the scrum; fullback Andries Coetzee made the third most carries (868), metres gained (5,464) and defenders beaten (243) of any fullback, while winger Courtnall  Skosan scored the second most tries (35), carried for 3,313 metres and made the third most clean breaks (103) of any back in the last decade. Fly-half Elton Jantjies puts up some super impressive figures: he scored the second most points (1,145) of any player in the last 10 years, also made the third-most try assists (59) of any player while gaining the most metres (2,902) and making the most clean breaks (50) of any South African No. 10s. He is the Player of the Decade. 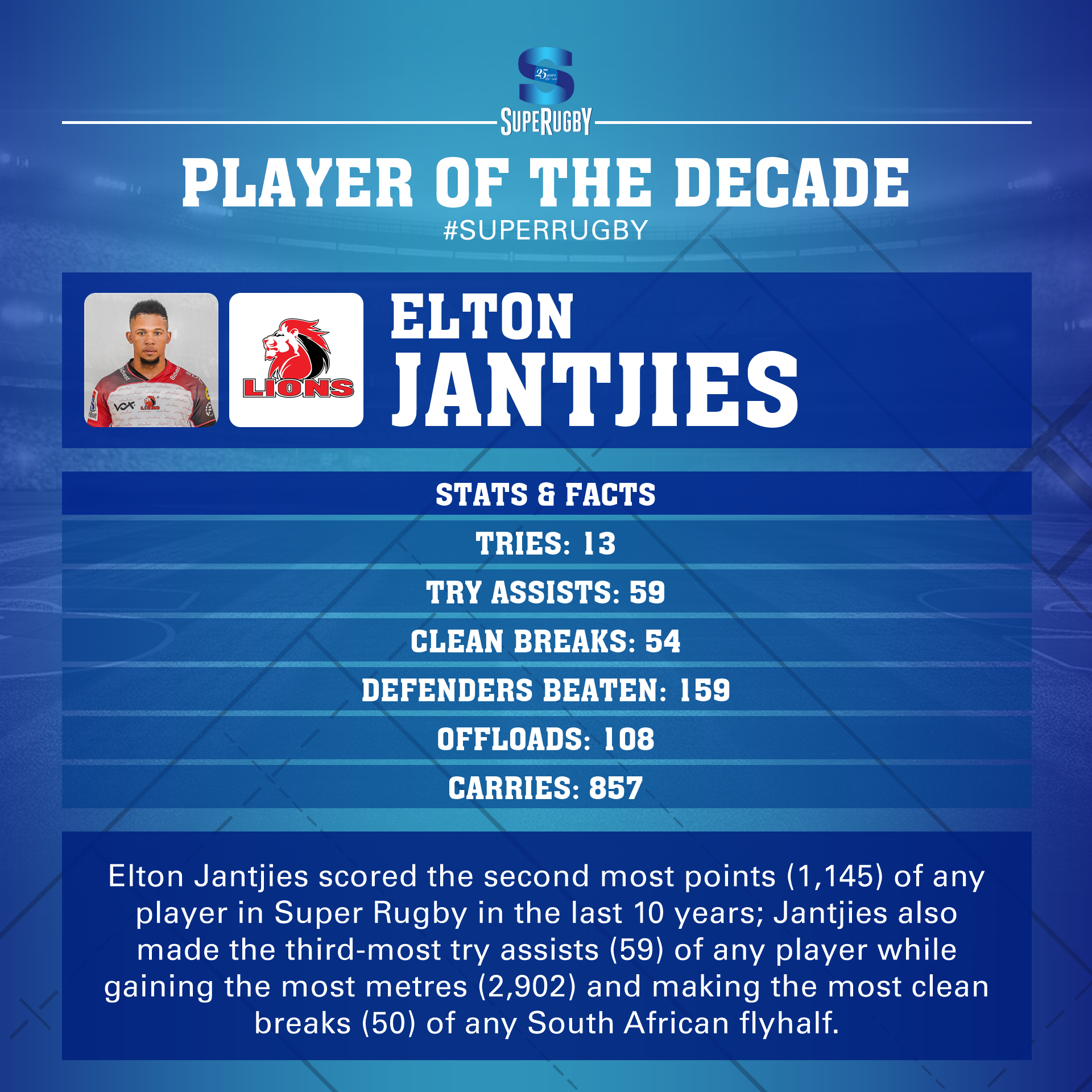 Up front are Lions and Springbok forwards Malcolm Marx, Franco Mostert and former captain Warren Whiteley. Marx, surely one of the biggest hookers in rugby, scored the second most tries (30) of any forward in the last 10 years and also won the most turnovers (80) of any hooker; while Mostert gained the most metres (1,055) of any South African lock from his 540 carries and stole 33 lineouts. Whiteley, now part of the Lions coaching team, made the most tackles (855) and second most clean breaks (46) of any No.8 in this period.

The Stormers also have six players in the team including four formidable and hard-working forwards. The book-ends are Steven Kitshoff and France Malherbe while World Rugby 2019 player of the year Pieter-Steph du Toit joins Mostert in the second row. Du Toit beat the most defenders (69) of any South African lock from his 459 carries, he also won 26 turnovers and made 42 offloads.

Inspirational Springbok captain Siya Kolisi gets the nod at 6; only two forwards have gained more metres than Kolisi (2,100) from his 624 carries while he also made the second most clean breaks (53) of any forward from his country. 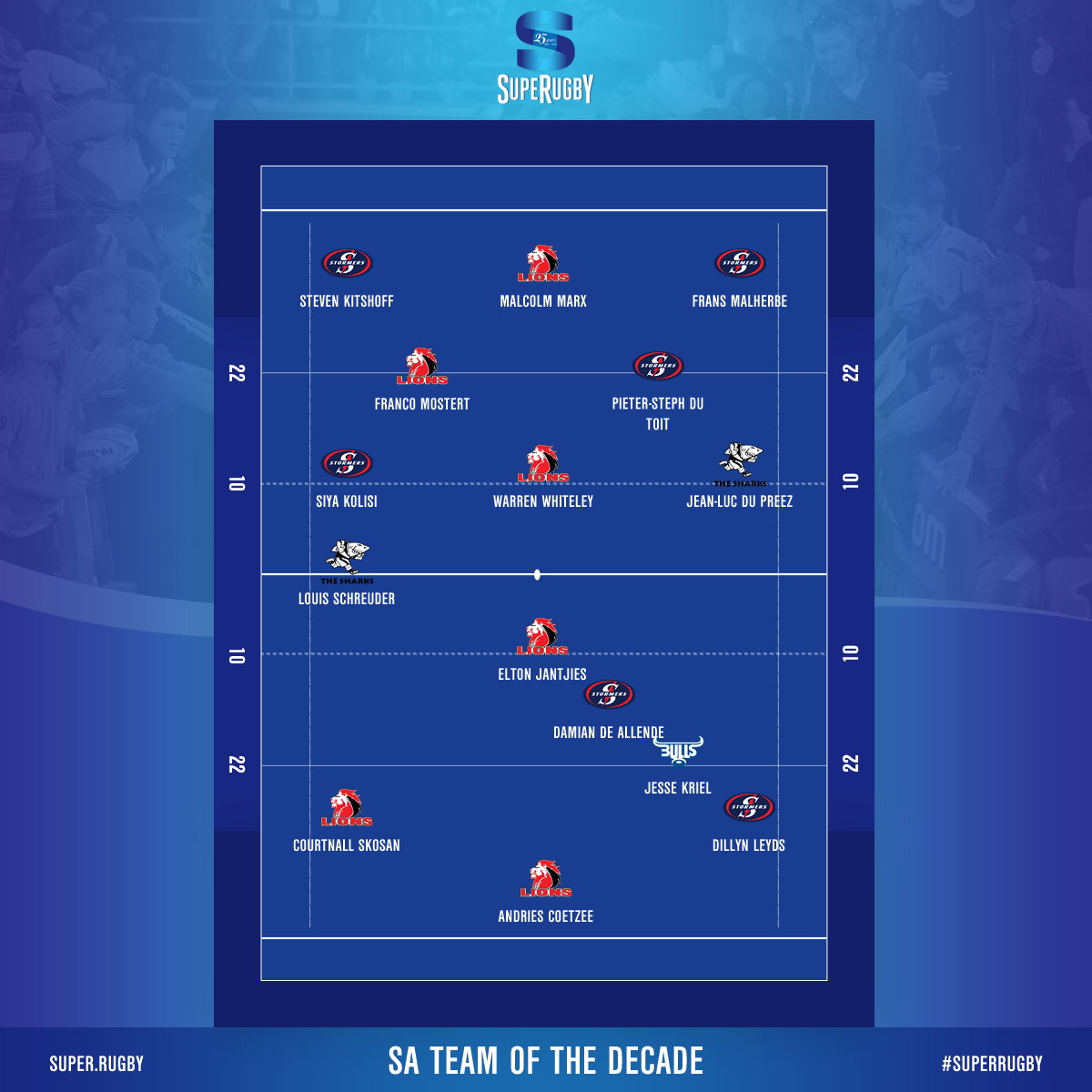 The centre paring sees the powerful 'Bok mid-fielder Damian de Allende joined by the sole Bull in the team, Jesse Kriel who scored a try in four consecutive matches. On the left wing is Stormers' entertainer Dillyn Leyds who made 602 carries for 3,711 metres gained, while only three backs have made more clean breaks (93) in the last decade.

The remaining back is scrum-half Louis Schreuder who has played for three of the South African teams, Stormers, Kings and Sharks. He played the most minutes (4,808) of any South African scrum-half in the last decade and only one player made more than Schreuder's 29 try assists; he also made 310 carries and beat 62 defenders.

Sharks team-mate Jean-Luc du Preez gets the number seven jersey. He made the second most carries (373) and metres gained (980) of any South African No.7; du Preez also beat the third most defenders (88) of any No. 7 overall in this time.

So who would captain this team? Whiteley or Kolisi?