The Stormers moved to the top of the Super Rugby standings with a hard-fought 17-7 victory over the Jaguares at Newlands.

Two tries in the space of eight minutes early in the second half proved too much for the Jaguares to overcome despite their best efforts late in the game, as the Stormers made it four wins from four to start the season.

The home side showed plenty of intent in the early stages, and after a typically powerful scrum earned them a penalty call, they set up an attacking platform in the opposition 22. A try looked on the cards, but they weren't able to deliver the killing blow as a dropped pass from Ruhan Nel let the Jaguares off the hook.

The visitors were giving away several unnecessary penalties to keep the Stormers on the front foot, and flyhalf Damian Willemse finally made them pay in the 13th minute when he slotted a penalty following hands in the ruck.

Disaster struck for the home side in the 18th minute when Springbok prop Frans Malherbe was sent off for a dangerous tackle as his shoulder collided with the head of a Jaguares player. Malherbe's 10-minute breather did not end up costing his side, however, as the Stormers defence stood firm until he rejoined the action.

The Jaguares continued to struggle under the onslaught of the formidable Stormers pack, particularly at scrum time, but a combination of some resolute defence and poor handling ensured the hosts were unable to take advantage of all the time they spent in the opposition 22.

Twice the visitors managed to hold up a charging Stormers maul with the tryline beckoning as it finished 3-0 to the home side after the opening 40 minutes.

Five minutes after the break, the Stormers finally scored the opening try of the match when scrumhalf Herschel Jantjies intercepted a Jaguares pass on his own 22 and ran all the way to the opposition tryline to dot down. Willemse added the extras as the hosts opened up a 10-0 lead.

Having not looked like scoring all match, the visitors nearly grabbed their opening try straight after the restart, and were only denied by a try-saving tackle from Welshman Jamie Roberts near the line.

The danger was averted and five minutes later the Stormers delivered a potentially killing blow at the other end of the pitch when Nel wrestled his arms free and touched down despite the attention of two defenders.

The Jaguares came close to hitting back shortly after the hour-mark when a driving maul from a five-metre lineout took them over the line, but the TMO backed the referee's call that the ball was held up.

The Argentines would get their try shortly after anyway when No 8 Rodrigo Bruni peeled off the back of an attacking scrum and sneaked over the line.

Unbelievably, the Jaguares were over for their second try right after the restart but the five-pointer was ruled out by the TMO for an offside call in the build-up.

That allowed the Stormers to stay 10 points ahead heading into the final 10 minutes and from there they managed to protect their lead pretty comfortably in the end to claim the victory. 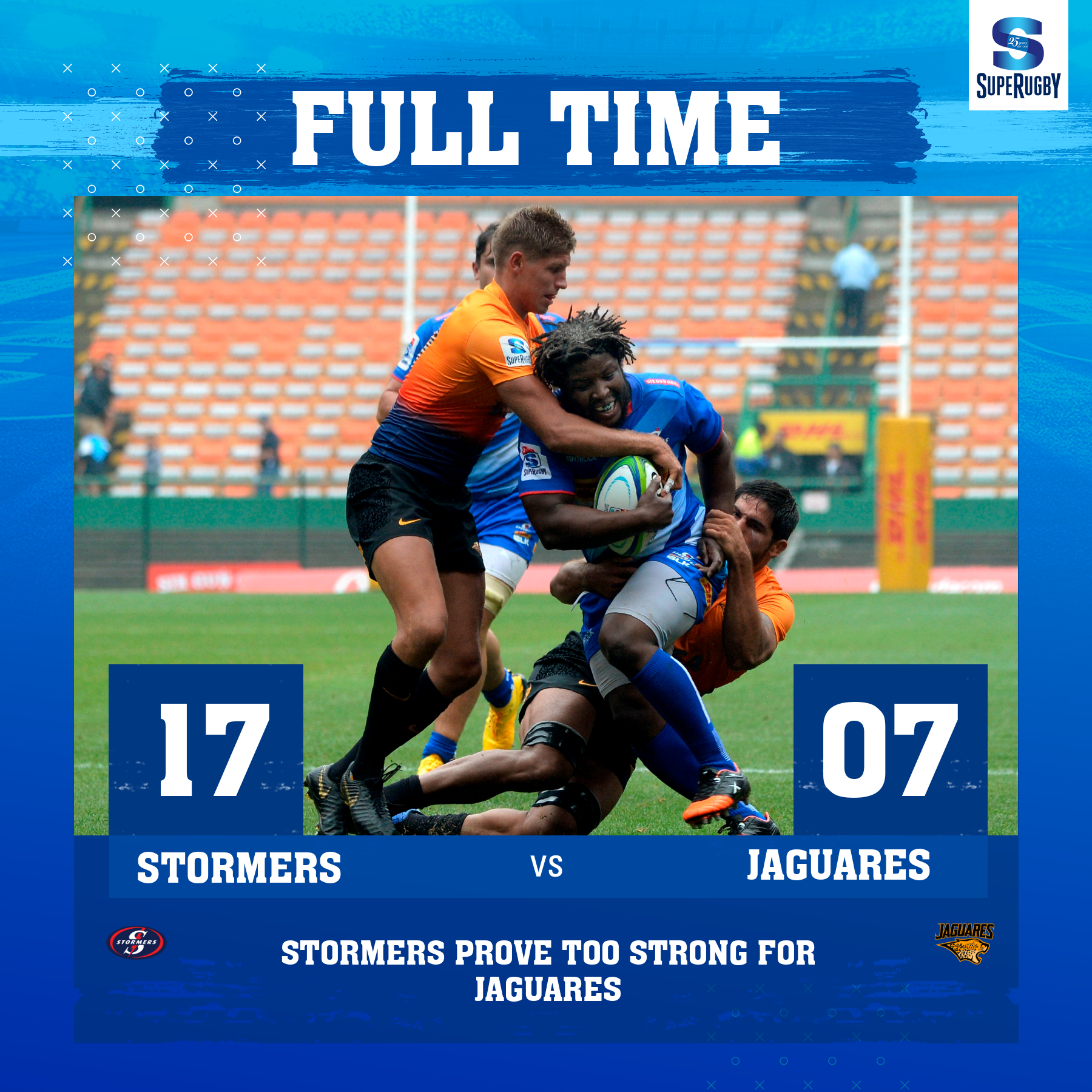