The Stormers secured back-to-back victories with a hard-fought 25-19 win over the Reds at Newlands in Cape Town on Saturday.

The win takes the Stormers four points clear of the Sharks in second place on the South African conference.

The Stormers deserved their win, proving the more clinical of the two sides. They looked especially dangerous on the kick return.

The Reds, in contrast, found it difficult to penetrate the solid defensive line of the Stormers.

Stormers fly-half Damian Willemse gave the home side a 3-0 lead with three minutes gone after opposite number Jono Lance miscued an up and under straight up in to the air, which resulted in the Reds being offside.

In the 14th minute, the Stormers scored a wonderful counter-attacking try. Willemse collected the kick and it was quickly shifted wide where Raymond Rhule ran an incisive outside line, drawing two defenders before offloading for JJ Engelbrecht who drew the final defender before playing in Dewaldt Duwenage, the scrum-half having enough pace to make it to the line for an 8-0 lead.

The next Stormers try came off the back of a dominant attacking scrum in the 25th minute. Taking the ball through the phases, they eventually found space out to the left where tighthead prop Wilco Louw was on hand to muscle his way over from close range. Willemse added the extras for a 15-0 lead.

Reds coach Brad Thorn would not have been happy with his side's display as Willemse stretched the Stormers' lead to 18-8 with a penalty after he was taken out off-the-ball by Reds inside centre Duncan Paia'aua.

But the Reds hit back five minutes before the interval. Having successfully stolen a Stormers lineout, a couple of powerful carries got them close before Lance hit a gap and offloaded for Caleb Timu to burst through and dot down as the Reds trailed 18-7 going in to the interval.

The Reds made an early statement of intent in the second half when Stormers substitute scrum-half Justin Phillips' exit kick was charged down by flanker Adam Korczyk. Eventually hooker Alex Mafi burst over after a series of powerful carries from the Reds' forwards. Lance converted to cut the deficit to four at 18-14.

However, the Stormers scored next through Rhule, who ran on to an expertly weighted Craig Barry grubber kick. Willemse slotted a difficult conversion from out on the left touchline for a 25-14 lead after 54 minutes.

Just when the Reds looked dead and buried, winger Filipo Daugunu scored a magnificent individual try in which he ran all the way from his own half to dot down. The Reds took the conversion quickly so that there was still time for the restart, setting up a nailbiting finale in which a converted try would seal it.

When it looked as if the Reds might snatch it with the lineout driving maul, the Stormers forced the turnover to deny the comeback and hold on for the 25-19 win. 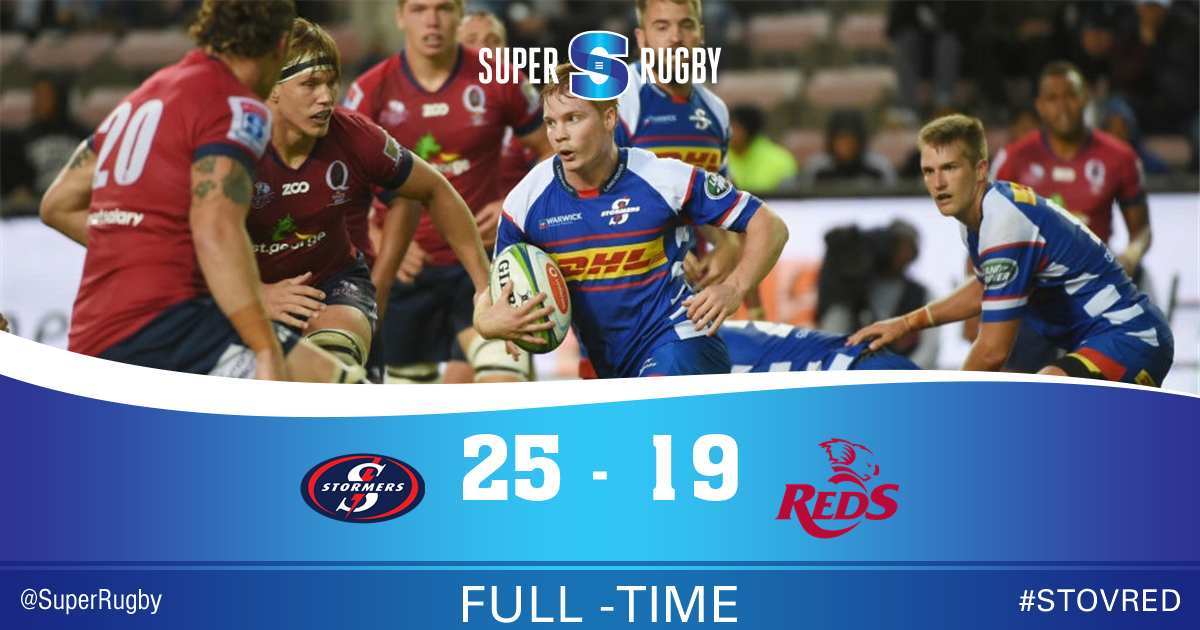