Stormers put Jaguares to the sword

The Stormers produced a dominant performance as they clinched their third victory of the 2019 Super Rugby with a 35-8 triumph over the Jaguares at Newlands on Friday evening.

Although the Argentines opened the match well and went 5-0 ahead via Bautista Delguy’s try, the Cape Town-based franchise wrestled control through their outstanding pack. SP Marais benefited, kicking 11 points off the tee, while Dan du Plessis went over for a 16-8 advantage at the interval.

Siya Kolisi then touched down at the start of the second period to put the hosts in command before Hershel Jantjies and Justin Phillips made sure of the win in the final quarter.

The South African outfit have struggled to score tries this season and it was easy to see why early on as they failed to find any sort of continuity with ball in hand.

In contrast, their opponents have once again shown plenty of fluency and that was in evidence in the opening score as excellent hands sent Delguy across the whitewash.

Robbie Fleck’s side are powerful up front, however, while their defence, led by the imposing Eben Etzebeth and Pieter-Steph du Toit, helped put pressure on the visitors.

The holes which were prevalent for the Argentines’ try were sealed and the Stormers duly got themselves into the contest via Marais’ penalty.

They were then the beneficiary of further Jags errors when miscommunication in the air saw two players fail to deal with Jean-Luc du Plessis’ chip ahead and his cousin, Dan, duly picked up and touched down.

Fleck’s outfit were now in control, despite Joaquin Diaz Bonilla’s penalty, and successive Marais efforts off the tee gave the hosts an eight-point buffer at the break.

The second period continued in the same vein with the Stormers’ defence and forwards dominating. As is typical with South African teams, the maul was strong and Kolisi scored after a drive had sent the Jaguares into reverse.

At that point, with the Cape Town franchise so dominant, the game was effectively over, but they had plenty of time to add to the visitors’ pain and Jantjies showed excellent sniping instincts to finish from close range.

Their next target was the bonus-point and, with Gonzalo Quesada’s men so ill-disciplined, it gave them plenty of opportunities and they eventually took one of them as Phillips went over. 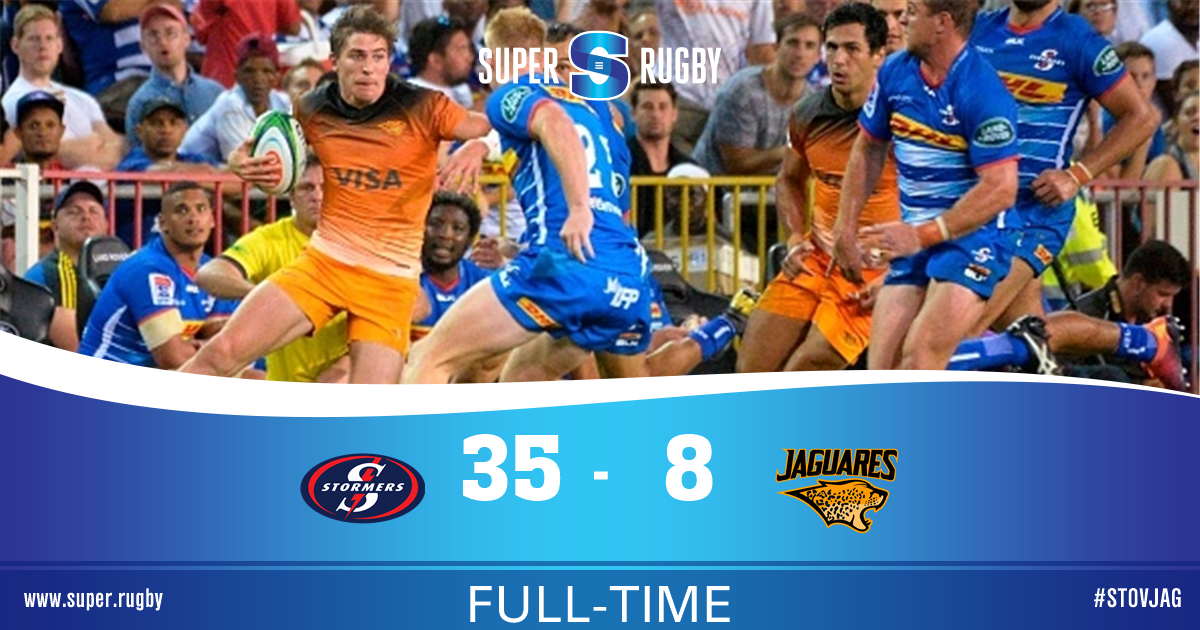