Stormers put on a brilliant display in Melbourne

The Stormers put on superlative defensive display to defeat the Rebels 41-24 at AAMI Park in Melbourne on Friday.

Despite having a touch over 30% possession and making 134 tackles, the Stormers managed to score five tries in a fantastic team effort.

The visitors enjoyed a brilliant start thanks to a solo effort from Dillyn Leyds. After a failed Rebels attack, the winger scooped the ball up on the run and jinked through several missed tackles to open the scoring in the second minute.

The Rebels enjoyed a sustained period of attack after that, but defensive pressure from the Stormers would force a number of turnovers. After a few minutes of failing to make much ground but earning a penalty, the Rebels opted for a shot at goal and Quade Cooper made it 7-3.

But the hosts were quickly under pressure after a number of strong runs from the Stormers forwards lead to a penalty in the middle of the park, which Jean-luc du Plessis popped over to extend the lead.

Winger Semisi Tupou then butchered a try in the corner for Rebels. Noticing the space out wide, Cooper executed a pin-point cross kick to a flying Tupu, who dropped the ball in front of an open try line.

A powerful Rebels scrum lead a to penalty and the 5m line-out move turned into an astonishing 15 phases which were all snuffed out by the staunch Stormers defence, leading to a knock-on and a sigh of relief from the visitors.

The Rebels would finally cross the whitewash in the opening seconds of the second stanza. A long and looping pass from du Plessis was intercepted from Reece Hodge, who went over untouched and the subsequent conversion from Cooper levelled the scores at 10-all.

The Stormers struck back minutes later, with debutante replacement Juarno Augustus getting a five-pointer with his first touch of the ball. Full-back Damian Willemse drew one defender and held the ball up beautifully for the flying Augustus on his outside, who showed a clean pair of heels to cross the line.

Good straight running off the back of a line-out move resulted in another score for the Stormers. Scorer-turned-provider Leyds beat a couple defender then offloaded to Springbok centre Damian de Allende who went over next to the poles.

And the hurt didn't stop there for the Rebels. A deft chip over the top caught a wicked bounce and evaded the covering Cooper, landing in the arms of former Springbok Sevens star Ruhan Nel who picked up his first Super Rugby try, ballooning the score out to 31-10.

There was a comeback of sorts from the Rebels with five-pointers from the slippery Will Genia and Campbell Magnay, but a intercept try from Nel at the death secured his brace and a much deserved win for the men from Cape Town. 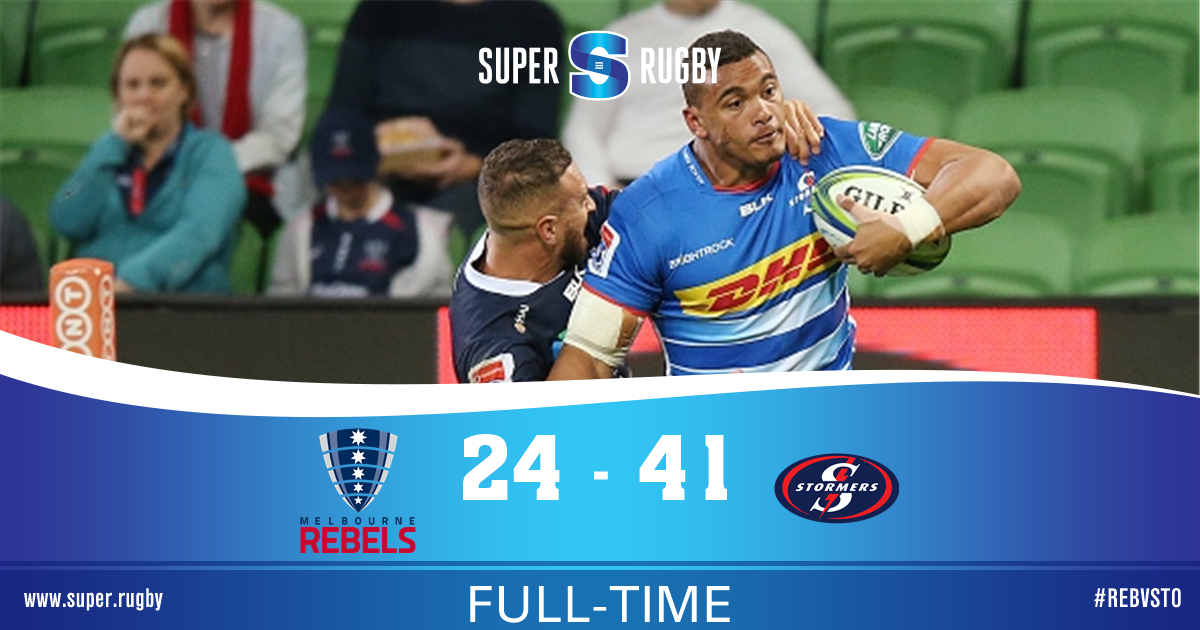