The Stormers maintained their unbeaten home record with a 34-18 victory over the Rebels in Super Rugby action at Newlands on Friday.

The men from the Cape have now won all four of their home fixtures this season.

The victory moves the Stormers above the Jaguares and Sharks into third place, with the Argentine outfit still to play against the Blues and the Sharks on a bye. Meanwhile, the Rebels' woes continue as they slumped to their fourth successive loss.

The Stormers' scrum dominance was integral to their victory while the Rebels were guilty of missing their first time tackles.

However, it was the Melbourne outfit who started the brighter and were rewarded for their early dominance after Stormers wing Craig Barry and centre EW Viljoen were penalised for going off the feet at the breakdown. Jack Debreczeni converted from right in front to give them a 3-0 five-minute lead.

Stormers fly-half Damian Willemse levelled matters with a penalty on ten minutes when Rebels prop Jermaine Ainsley was found guilty of illegal wheeling at the scrum and won the penalty.

Soon after, a piece of individual brilliance from centre Damian de Allende, in which he steamrolled Debreczeni, gave the Stormers the lead for the first time in the match and his third try of the campaign.

The home side continued to dominate possession and territory and won a turnover. dismantling another Rebels scrum. Captain Siya Kolisi pointed to touch, having previously gone for the three-pointers and was rewarded for his bravery.

After the Stormers forward had committed Rebels defenders to the ruck with some powerful carries, Willemse chose the right time to go wide with the long pass. Pieter-Steph du Toit was on hand to provide the assist with an offload in contact for JJ Engelbrecht, who dotted down in the left-hand corner.

This meant the Stormers took an 11 point lead into half-time and truth be told it should have been more as the home side were sometimes guilty of not taking their chances. After all the Rebels only had 30 percent of the possession and territory in the opening 40.

Just under four minutes after the interval, the Stormers continued where they left off. Dewaldt Duwenage showed good awareness putting in an excellent grubber kick for Dillyn Leyds who showed great anticipation to dive on to the ball in a clinical finish. Willemse's conversion made it 24-6.

Finally, the Rebels began to enjoy possession and territory and after seventeen phases and what must be said some beautiful build-up, Sefa Naivalu was on the end of substitute flank Colby Fainga'a's long pass to finish to have the easiest of run-ins on the overlap. Debreczeni's conversion cut the deficit to 11 at 24-13.

But the Rebels were pegged back once again by the boot of Willemse, who kicked his second penalty to go with his three conversions and made it 27-13 after 56 minutes.

With five minutes to go, Naivalu grabbed his brace, scoring in identical fashion after a number of pick and gos from the Rebels forwards had sucked the Stormers defence in very tight, allowing for the long pass over the top to allow the Fijian flyer the easiest of run-ins once again.

The Stormers would have the last laugh, however, as Engelbrecht grabbed his brace after an excellent break by Sikhumbuzo Notshe in the build-up to close out a convincing 34-18 victory. 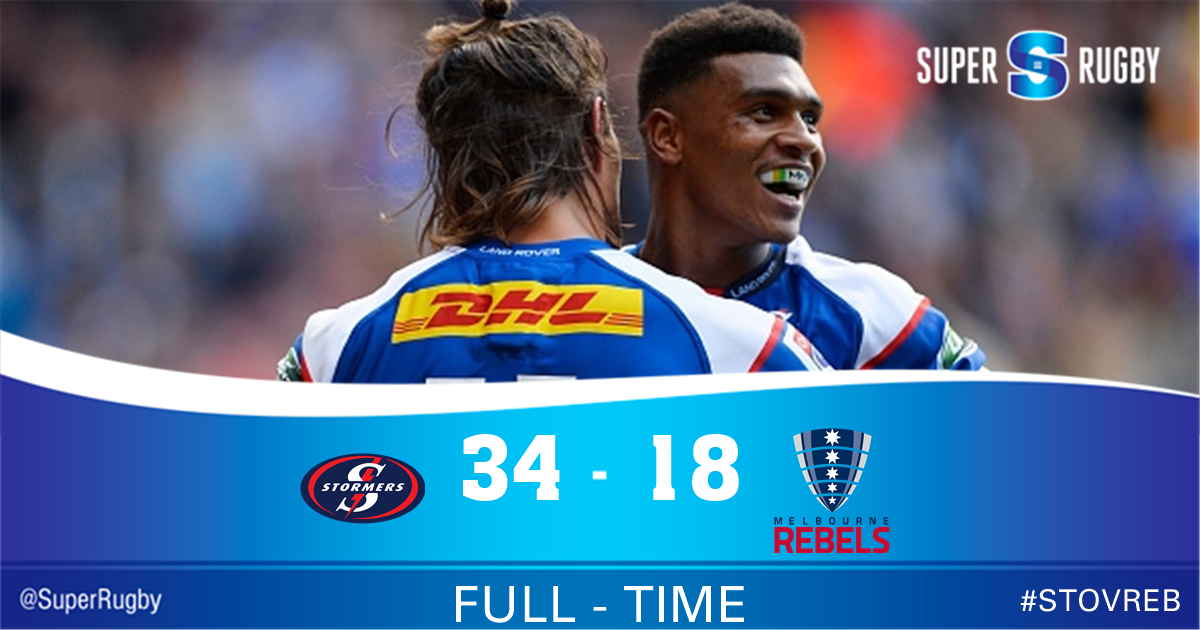