Stormers too strong for Cheetahs at Newlands

The Stormers were made to work very hard before eventually wearing down a valiant Cheetahs outfit 30-13 in Saturday's Super Rugby Unlocked clash at Newlands.

While the scoreline flattered the hosts somewhat, they did eventually gain the upper hand late in the match thanks largely to their powerful pack, ultimately outscoring their opponents three tries to one.

The Stormers got off to the best possible start when their Springbok scrumhalf Herschel Jantjies put them into a 7-0 lead courtesy of a superb solo effort. The nuggety No 9 arrived at a ruck close to the touchline in the opposition 22 and spotted a little gap on the blindside, darting clear unopposed for a try which was duly converted by flyhalf Damian Willemse.

The Cheetahs were putting themselves under pressure with a number of handling errors, including one in their own 22 that put the Stormers back on attack. After conceding a series of penalties near their own touchline and getting a warning from the referee, the visitors were probably relieved when the home side opted to take the three points and extend their lead.

It was Rosko Specman who finally gave Cheetahs fans something to smile about with a nice break and offload leading to a good attacking period, and only another handling error right at the Stormers tryline denied the visitors a chance to hit back.

The Cheetahs were starting to find their footing, however, and after disrupting a Stormers lineout and earning a penalty for their troubles, Tian Schoeman finally got a chance to put his side on the board.

Moments late, a great poach from Steven Kitshoff near the halfway line earned the Stormers a penalty and a kick for position, but this time it was their turn to rue a missed opportunity after knocking on with the tryline in reach.

There was one more chance for the home side to try and stretch their lead before half-time, and Willemse delivered by nailing a drop goal from 45 metres out as it finished 13-3 to the Stormers at the break.

There were plenty of high-fives from the Cheetahs forwards early in the second half when they earned their first scrum penalty of the game, and Schoeman converted the pressure into points to bring the visitors back to within seven.

But the Stormers hit back almost immediately with a magnificent try that started in their own half with a great break from Warrick Gelant and saw the ball move through the hands beautifully from one side of the field to the other before hooker Scarra Ntubeni offloaded to eighth man Juarno Augustus for the score.

After a lengthy series of attacks and counter-attacks from both sides, the Cheetahs finally found a breakthrough from that man Specman, who had been a thorn in the Stormers defence all night.

Taking full advantage of a favourable high ball bounce, the explosive winger snatched the ball from under the nose of the Stormers defence before an acrobatic dive allowed him to dot down even as was being taken over the touchline. Schoeman added the extras and suddenly the visitors were back to within seven with 15 minutes to play.

The Stormers needed a response and they found it from their Springbok-laden pack, who drove the Cheetahs back in the scrum in a dangerous area to earn a valuable penalty. Willemse took aim and nailed the kick to move the hosts 10 points clear.

Indeed, it was the relentless pressure from the Stormers forwards and their second-half substitutes that eventually wore the visitors down, and it was a tiring Cheetahs defence that capitulated as Willemse surged into a gap in the opposition 22 before freeing up Gelant for the score with a scintillating offload.

There was no way back for the Cheetahs from there, and the match ended in a somewhat unfortunate fashion when Willemse was shown a yellow card for cynical play moments before the referee blew his final whistle. 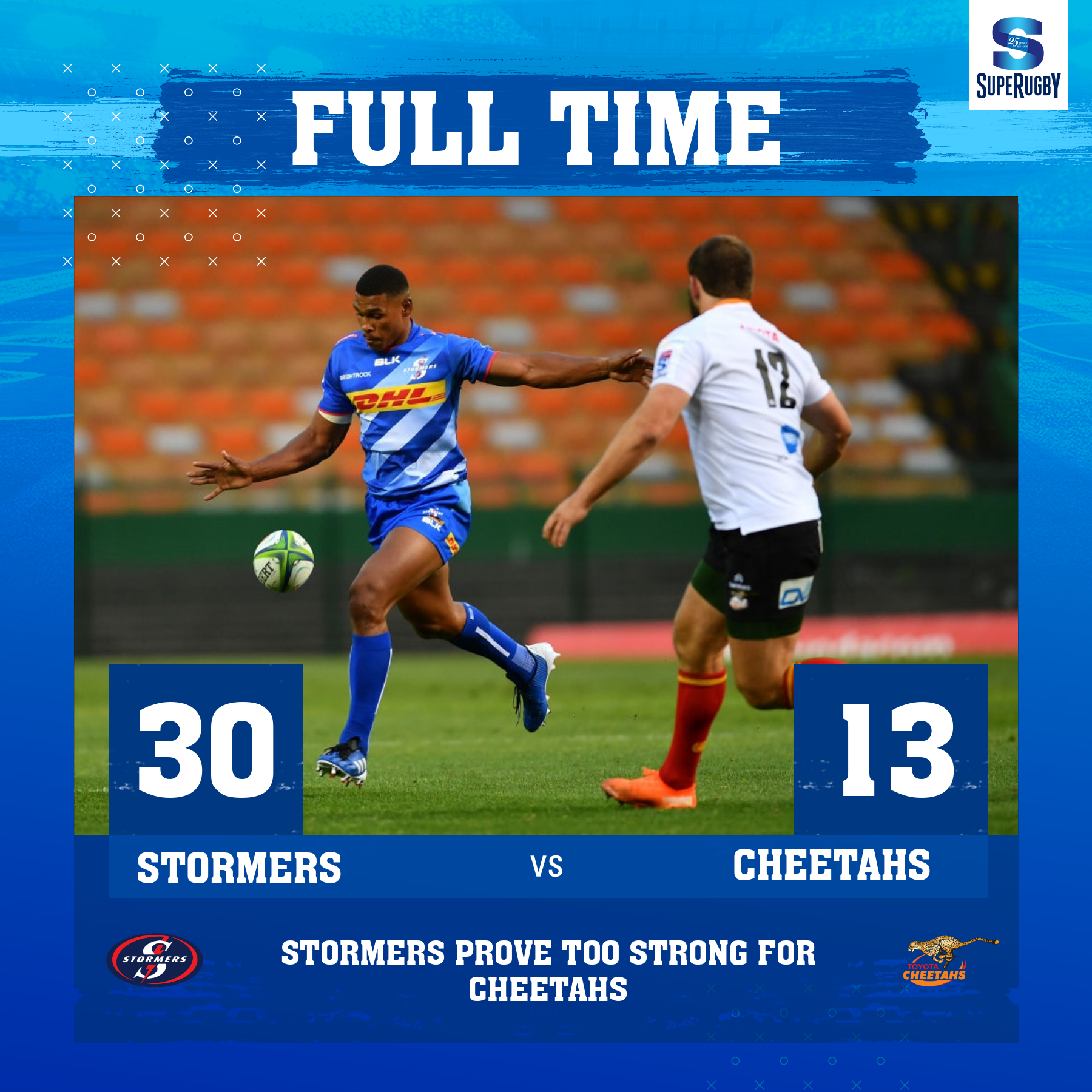