The Sunwolves claimed their first victory of the season when they beat the Reds 63-28 in an entertaining encounter in Tokyo on Saturday.

Hayden Parker was the home side's hero as he contributed 38 points - which is a new pointscoring record for the Sunwolves - courtesy of seven penalties, six conversions and a try and this was the biggest ever winning margin in the Sunwolves' history.

As the scoreline suggests, the Sunwolves were full value for this win and they outscored the visitors six tries to four with Hosea Saumaki leading the way with a deserved hat-trick but the Reds also contributed to their own downfall by conceding a plethora of penalties.

The Sunwolves had the better of the early exchanges and held a 6-0 lead after seven minutes courtesy of two Parker penalties.

The visitors soaked up the early pressure but finally opened their account in the 10th minute when, after taking the ball through three phases from a lineout drive, Brandon Paenga-Amosa crossed for a deserved try.

Jono Lance landed the conversion which gave the Reds a 7-6 lead but the Sunwolves struck back via another penalty from Parker after Taniela Tupou was blown up for offside play on defence.

The topsy-turvy nature of this game continued when the Reds regained the lead in the 21st minute courtesy of a try from Ben Lucas after he went through a gap close to the home side's try-line.

Lance added the extras but that was the last time the visitors would score points during the half as the Sunwolves took control of proceedings.

Another Parker penalty in the 28th minute narrowed the gap to two points and on the hour-mark they regained the lead when Grant Hattingh dotted down after trading passes with Craig Millar in the build-up.

Three minutes later, the Sunwolves pounced on an error from Jordan Petaia, who failed to gather a bouncing ball inside his half, and the hosts were soon deep inside the Reds' 22 where Michael Little offloaded to Parker, who went over for his side's second try.

Parker slotted the conversion and added another penalty in the 40th minute which gave his side a 29-14 lead at half-time.

The Sunwolves continued to dominate after the break and three minutes into the second half Parker added his fifth penalty after Izack Rodda was penalised for obstruction.

And in the 54th minute, Saumaki crossed the whitewash, when he spotted a gap in the Reds' defence after the Sunwolves took the ball through seven phases in the build-up.

Parker added the conversion and another penalty before the Reds replied with an Angus Scott-Young try from close quarters.

However, things went pear-shaped for the visitors in the 68th minute when they conceded a penalty try after Duncan Paia’aua was blown up for a high tackle on Jason Emery close to the Reds' try-line and to make matters worse, Paia’aua was also yellow carded for his indiscretion.

The Reds did not surrender though and struck back when Alex Mafi offloaded to Filipo Daugunu, who outpaced the cover defence before crossing for his side's fourth try in the 74th minute.

The Sunwolves would have the final say though and Saumaki capped a superb performance in the game's closing stages when he crossed for two further tries which were both converted by Parker. 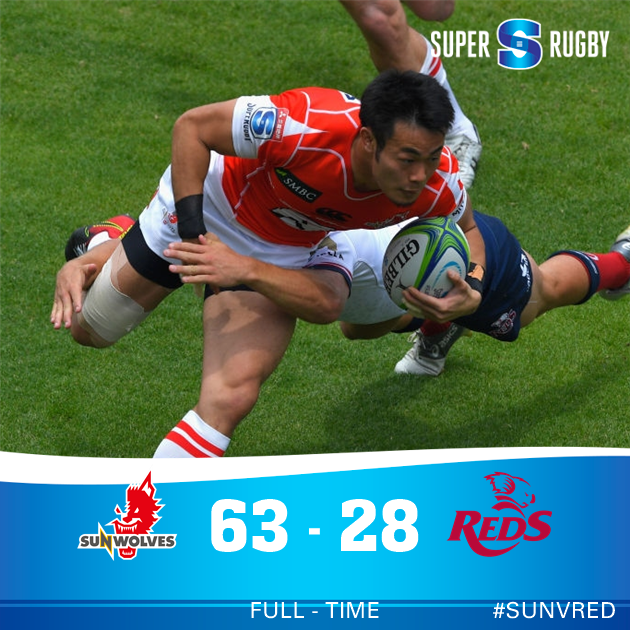