The Highlanders cruised to a comfortable and dominant 52-0 victory over the Sunwolves at the Prince Chichibu Memorial Rugby Stadium.

It was somewhat of a surprise how easy it all was for the Highlanders after the Sunwolves gave the Hurricanes a bit of a scare last week, especially considering the match was played in Japan.

But the visitors began like a house on fire, scoring a point a minute for the first half an hour, beginning with Thomas Franklin crossing the whitewash for the match's opening try less than four minutes after the game began.

This was followed by a quick-fire double with tries by Tyrel Lomax and Tevita Li in the 11th and 13th minutes respectively.

The hosts defence just had no answers for the enterprising and energetic backline play by the New Zealanders.

Josh Ioane secured the bonus point in just the 19th minute of the match with his first try of the game, converting it himself to take the score to an intimidating 26-0.

Liam Coltman completed a horrendous first half for the Sunwolves when he scored the visitor's fifth try of the match in the 31st minute, helping his side to a 33-0 lead at half time.

To be fair to them, the home side was vastly better after the break, presumably as a result of a severe dressing down by head coach Tony Brown.

They spent the first 10 minutes of the second half camped in Highlanders territory, winning penalty after penalty but choosing to go for the try rather than take a meaningless three points.

Unfortunately it did not pay dividents as the New Zealanders eventually won the ball and hit back hard on the counter, with Tevita Li crossing the line in the 51st minute to complete his brace and further assert their dominance.

Then the wheels fell off again for the home side and further tries by Rob Thompson and Sio Tomkinson took the Highlanders past the 50 point mark.

In a moment that tipified typified the Sunwolves struggles on the day, when they thought they had finally broken their duck via Semisi Masirewa try in the 67th minute, it was disallowed because of a forward pass in the build up.

To their credit, the Sunwolves never gave up and continued to search for ways through the Highlanders defence while stoically holding them at bay despite the scoreline, but the gulf in class on the day was all to evident and they failed to get on the scoreboard at all. 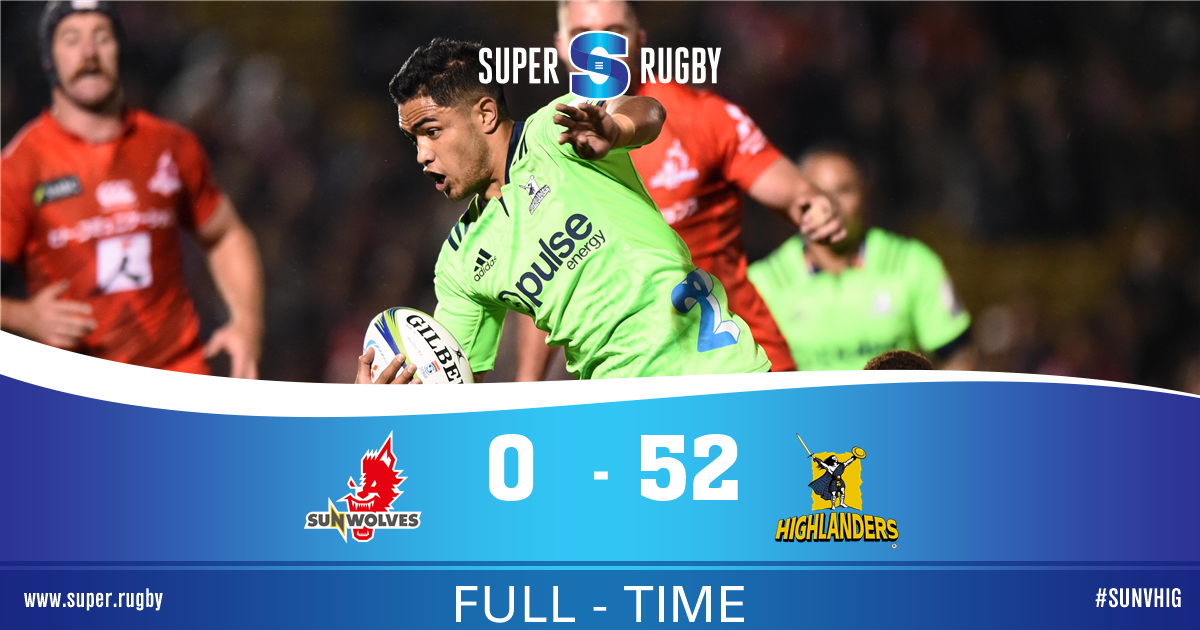