Rahboni Warren-Vosayaco touched down late on as the Sunwolves snatched an outstanding 42-37 triumph over the Bulls in Singapore.

The Japanese outfit were without head coach Jamie Joseph, with Tony Brown taking charge for the rest of the season, but that did not affect the hosts. They went 14-0 ahead through Hayden Parker and Keisuke Uchida tries before the South Africans responded in the second quarter.

Jesse Kriel got a brace and Handre Pollard also crossed the whitewash to go with his three conversions as John Mitchell’s men opened up a 21-14 lead at the interval.

Pollard added a penalty after half-time but Gerhard van den Heever’s score made sure that the hosts remained in contention. Conraad van Vuuren and Willie Britz then traded efforts before the visiting pivot kicked his second three-pointer.

After Michael Little’s superb try and another Pollard effort off the tee, just two points separated the sides going into the final few minutes, but it was the Sunwolves who took the win when Warren-Vosayaco went over.

Despite only moving onto three victories for the campaign, Joseph’s men always look to play expansively and they cut the visitors open regularly.

Little, as he has so often been this season, was the inspiration for the first try, breaking through the midfield and passing to Akihito Yamada. The winger’s attempted off-load went to ground but the Sunwolves re-gathered and Little was involved a second time when the 25-year-old fed Parker to score.

It was outstanding play from the hosts but, as ever, their concerns centred around the set-piece. Unsurprisingly, the South Africans had the ascendency in the scrum and maul and the visitors should have scored five metres out, only to be penalised by referee Ben O’Keeffe.

The Sunwolves were having joy at the breakdown, however, and won several turnovers which gave them possession inside the opposition half. They then produced a lovely lineout move that caught the Bulls unawares as hooker Jaba Bregvadze set up Uchida, who crossed the whitewash unopposed.

At 14-0 up, they were well in control but, within five minutes, all their good work had been undone through a pair of awful Van den Heever errors. Firstly, the former Bull had his kick charged down by Kriel before the centre latched onto the full-back’s overthrown quick lineout to level matters.

Buoyed by those scores, Mitchell’s charges began to dominate the forward battle and, after Britz had been sin-binned for collapsing the maul, Pollard went over to take them 21-14 ahead.

The fly-half extended that buffer from the tee early in the second period, but the Sunwolves immediately responded when Semisi Masirewa broke through and gave Van den Heever the opportunity to partially atone for his earlier errors.

It was proving to be a thrilling game and the Bulls put together a fine move for their fourth try, which ended in Van Vuuren touching down, before Britz benefited from a fortuitous pass to keep the Japanese team in contention.

Pollard made it 34-28 in the Bulls’ favour going into the final quarter before the Sunwolves produced their best move of the match. It was arguably the try of the weekend as it went through several pairs of hands and ended in Little deservedly scampering over.

The South Africans regained the advantage via the boot of their fly-half but the home side had one last sting in the tail as Warren-Vosayaco crossed the whitewash to snatch a remarkable win. 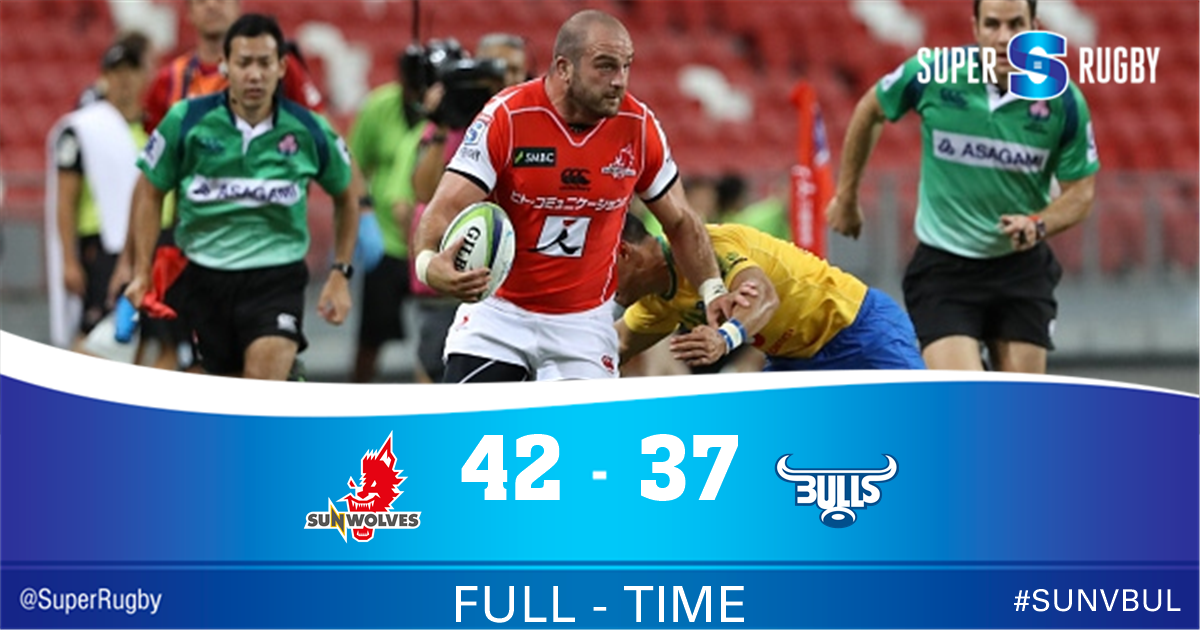