Sunwolves Too Strong for Rebels in Fukuoka

The Sunwolves kicked off their final season in Super Rugby with an impressive 36-27 victory over the Melbourne Rebels.

The Japanese outfit outscored their Australian counterparts by five tries to four to beat them for the very first time, despite a valiant late comeback from the visitors.

After some early dominance, the Sunwolves scored their opening try in the 10th minute when Rudy Paige held up the ball before offloading to Siosaia Fifita, who made a clean break and finished up close to the tryline where the ball was recycled quickly for Keisuke Moriya to slip through the defence and score.

Garth April missed the conversion and the Rebels were soon back to within two points when Matt Toomua converted a penalty kick.

The Sunwolves were soon back on the attack and picked up their second try with a textbook rolling maul from a lineout, as Jarred Adams powered over the line for the score.

At the other end, the Rebels hit back straight away with a maul of their own, allowing Anaru Rangi to break off the back and cross for the try.

The Sunwolves were soon back on the attack themselves at the Rebels' tryline, and a wonderfully floated long pass from Moriya found Tautalatasi Tasi out wide where the winger had oodles of space to sprint to the corner for the try.

The Rebels continued to give as good as they got and hit back with their second try in the 31st minute courtesy of Dane Haylett-Petty, though it was Billy Meaks who created the gap by drawing in the defenders before making the offload.

Four minutes before half-time, April slotted his first penalty for the Sunwolves as it finished 22-13 at the break.

The Rebels needed to start brightly in the second half, but instead it was the home side who struck just two minutes in when James Dargaville collected a kick near the touchline before sprinting all of 50 metres for a wonderful solo try.

Just after the hour-mark, the Sunwolves scored their fifth try of the evening when replacement scrumhalf Naoto Saito put April clean through a gap in the defence close to the line.

April converted his own try to give the Sunwolves a formidable 36-13 lead, surely too much for the Rebels to overcome.

But to the Australian outfit's credit, they refused to lie down, running in two further tries from Andrew Kellaway and Andrew Deegan in the 64th and 75th minutes to very nearly pull off an unlikely comeback win.

But the Sunwolves' advantage proved too big to overcome in the end, as some last-ditch scrambling defence on their own tryline prevented what looked a certain try for the Rebels two minutes from time.

From there, the home side was able to keep it tight and run down the clock to secure the well-deserved win. 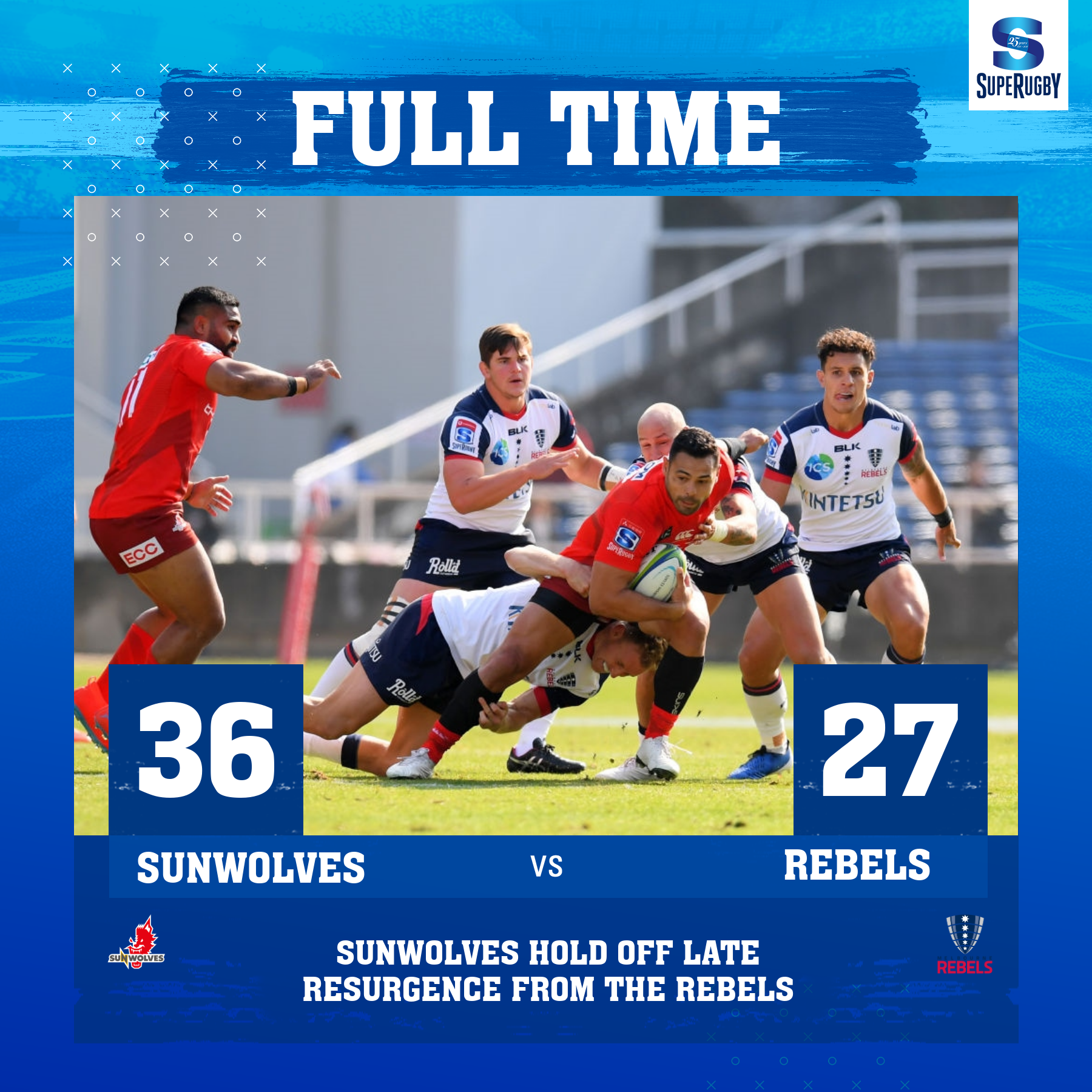