Waratah's fullback Israel Folau needs two more tries to break the all-time Super Rugby try scoring record. Will he do it against the Reds?

Fresh from their first bye of Super Rugby 2019, the NSW Waratahs prepare for a derby clash with the Queensland Reds in Round 4 and a special milestone looms for one of their main men. Israel Folau is on the cusp of becoming the most prolific try scorer in the history of Super Rugby, with his quick rise to the top of the rankings setting the pace far above what many others have managed.

As it stands heading into Round 4, Doug Howlett holds the current Super Rugby record for the most tries scored with a tally of 59 five-points across his tenure at the Highlanders, Hurricanes, and Blues. Israel Folau currently sits on 58 career Super Rugby tries, just one shy of equalling Howlett and two away from eclipsing him andbecoming the first player in the history of the competition to score 60 tries. 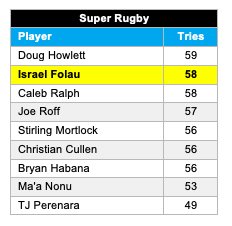 There would be few more fitting stages to secure the feat than against the Queensland Reds for Israel Folau. The NSW Waratahs’ flyer has scored four tries in his last three games against the side from up north, bagging two braces in that span of which one came in his most recent clash against them.

In fact, Folau’s tally of 58 tries since his Super Rugby debut is 28 tries higher than any other Australia-based player, with both Taqele Naiyaravoro and Henry Speight having crossed for 30 tries in that period.In his Super Rugby career, Israel Folau has scored five or more tries against four different opposition clubs; however, against no opposition has he scored more tries than domestic rivals Queensland Reds (7), whom he will face off against once again this weekend (Round 4). 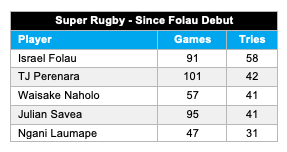 The recent addition of the Sunwolves to Super Rugby has been a blessing for Israel Folau as well. TheNSW Waratahs’ try-scoring machine has scored five tries in just three games against the Japanese club, making them the only team against whom he averages more than one try per game in the competition.

On the other end of the spectrum, no team has managed to shut down Israel Folau as effectively as the Crusaders. Folau has scored just one try in six games against the Crusaders, his lowest strike rate against any team in the competition.

No team has been impervious to his attack, however; Israel Folau has scored at least one try against every one of the 17 different teams that he has faced in his Super Rugby career. 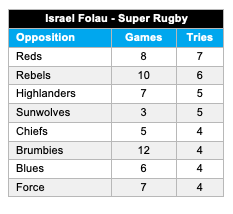