Super Rugby AU has officially reached the halfway stage, with just five rounds left to play in the regular season... which players are making their mark?

The Brumbies sit atop the competition table with a 100% winning record (4/4) but how many of their players have made the Opta Index’s best XV for the AU campaign so far?

The Brumbies comprise four of the seven players in the backline. Jack Maddocks occupies the fullback role as one of only two NSW Waratahs player to make the side. Maddocks has gained the most metres (296) of any player in Super Rugby AU so far from his 48 carries, which is the most of any back. Filipo Daugunu is the only Reds’ player in the backs – his 14 defenders beaten and six clean breaks for the tournament are only bettered by one player in each of the respective categories. Tom Wright of the Brumbies seals the other wing position on the back of his 8.8 metres gained per carry – the most of any player in Super Rugby AU (min. 20 carries). No individual has made more carries (34) or offloads (3) playing at outside centre than the Brumbies’ Tevita Kuridrani – while his inside partner Irae Simone (13) has beaten twice the amount of defenders of any other player to have played at inside centre this season. 14 of Kuridrani’s carries have seen him make dominant contact – the most of any back in the tournament.

Matt Toomua (Rebels - pictured below) and Joe Powell (Brumbies) form the scrumhalf/fly-half combination. Toomua has made 15 more kicks from hand (71) than any other player in Super Rugby AU and sits equal-first (47 – 7 conversions and 11 penalty goals) on the point-scoring charts alongside the NSW Waratahs’ Will Harrison. Meanwhile, Joe Powell (3) is one of only three players to have made more than one try assist in the competition so far (James O’Connor – 3 and Tate McDermott – 2) and his eight break passes are double the amount of any other individual. 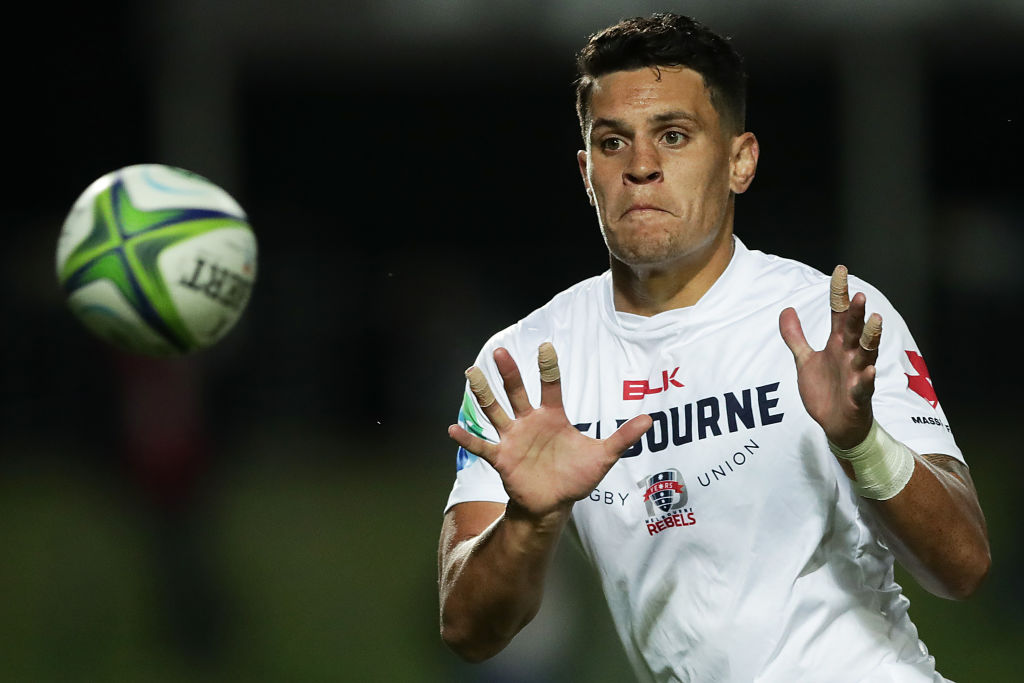 Harry Wilson (Reds - 60) locks down the number eight position having made 11 more carries than any other player in the Australian competition. Indeed, Wilson’s 177 metres gained from those carries is also the most of any forward in Super Rugby AU. Michael Hooper (NSW Waratahs) continues to cement his status as one of the leading players in Australian rugby; he has won five jackal turnovers so far in this competition, only the Reds’ Fraser McReight (6) has won more. In addition, the 58 defensive rucks Hooper has attended in Super Rugby AU is 15 more than any other individual. Henry Stowers from the Western Force joins him at blindside flanker; his 71 tackles is the most of any player in the tournament and 10 more than the next best player Fergus Lee-Warner (61), his teammate and one of the locks in this XV. Lee-Warner’s tackle success rate (61/65 – 93.8%) is the best of any of the top eight leading tacklers this season. The Reds’ Lukhan Salakaia-Loto is the other lock, having made the joint-most offloads (6) and the second most carries (49) of all players in Super Rugby AU, along with 14 lineouts won (inc. 2 steals). Wilson (26), Salakaia-Loto (22) and Lee-Warner (22) are the only players to have crossed the gain line on 20+ carries in Super Rugby AU. In addition, Salakaia-Loto (2) is the only player to have had more than one of his offloads result in a break in the campaign.

Three different teams make up the front row. The Brumbies’ Folau Fainga’a is equal first on the Super Rugby AU try-scoring charts (4 – also Byron Ralston) and has made more successful lineout throws (41) than any other player in the campaign. Pone Fa’amausili (Rebels) leads all props for metres gained (89) and defenders beaten (9) and is the only one to have made multiple offloads (2). Meanwhile, Angus Wagner (Force – 3) is the only prop to have won multiple turnovers and has made the third most tackles (37) of any player in his position in Super Rugby AU so far.

As Super Rugby AU continues to heat up, watch out for other players who could emerge and challenge for any of these positions come the season’s end.