It’s only Round 3 but the NSW Waratahs will be fighting for their season when they host the Western Force on Friday night.

The ‘Tahs are under the spotlight following two record defeats against the Reds and Brumbies and desperately need a win at home to reroute their 2021 campaign.

Stand-in skipper Alex Newsome was issued a baptism of fire in last week’s ill-fated trip to Canberra and while the Force lack the Brumbies firepower,  the ‘Tahs centre and coach Rob Penney won’t be taking any chances against their Western rivals.

Veteran prop Tetera Faulkner has been recalled at Angus Bell’s expense to shore up the scrum while exciting youngster Mark Nawaqanitawase will make his first start at fullback.

Meanwhile, the Force are out to break a nine-game losing streak in Super Rugby AU after re-entering the domestic competition last year and showed plenty of spirit in their 27-11 Round 1 loss to the Brumbies.

History is against the Force with NSW winning four of their last five encounters, including both fixtures last year, however Tim Sampson’s men will be quietly confident of a boilover at Bankwest Stadium.

Argentine Test star Tomas Cubelli has been brought in head of club captain Ian Prior while former Chiefs and Brumbies flyer Toni Pulu will start on the left wing. 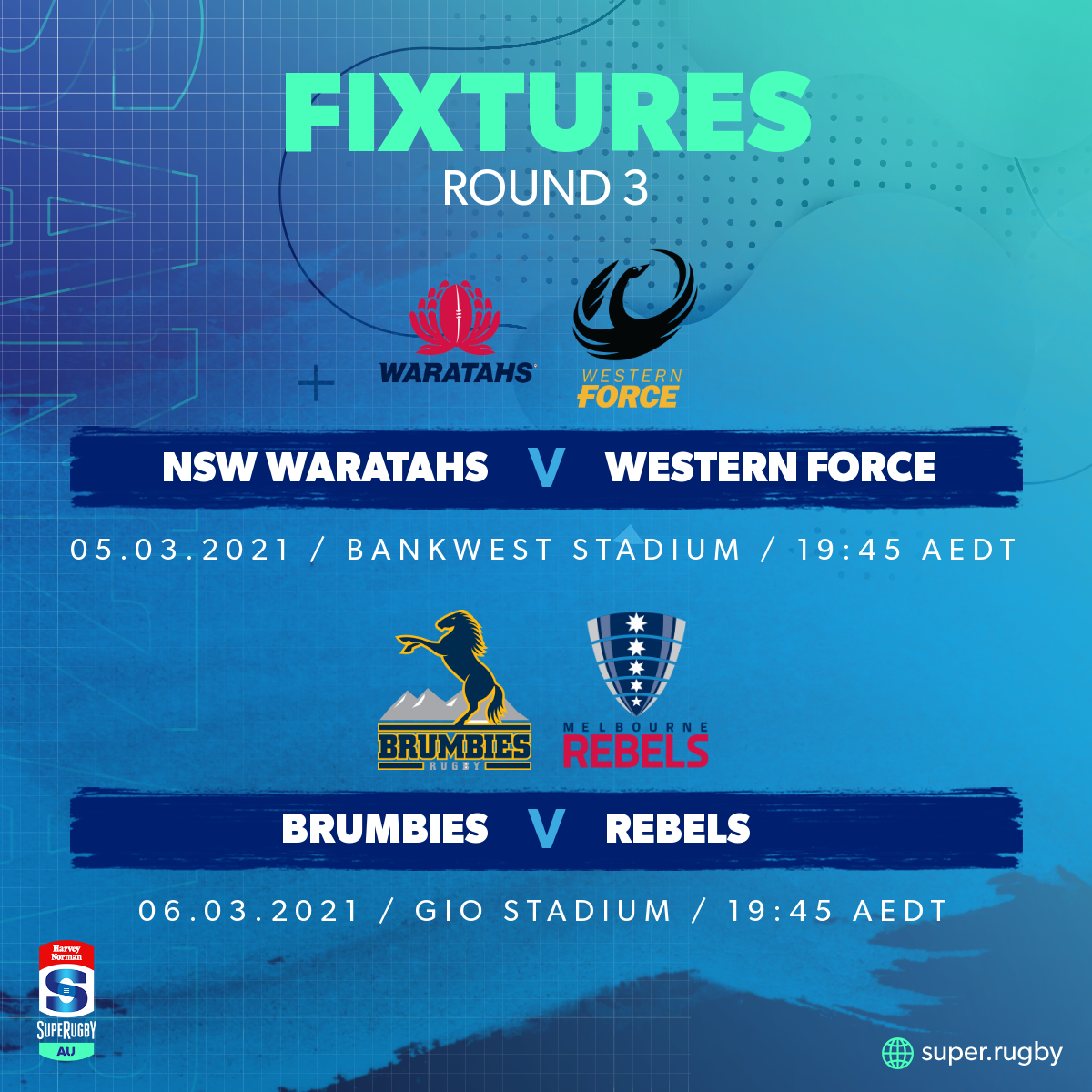 In Round 3’s Saturday night fixture, the Melbourne Rebels will look to end ACT Brumbies’ seven-match winning streak at their GIO Stadium fortress.

Dan McKellar’s side have won 17 of their last 18 Super Rugby home games, including last year’s Super Rugby AU decider, and enter the contest as red-hot favourites after thrashing the ‘Tahs 61-10 at the same venue last week.

Brumbies’ flyers Mack Hansen (166) and Tom Banks (161) are the top metre-eaters in Super Rugby AU this season and form a potent back-three with Andy Muirhead outside Test playmakers Nic White and Noah Lolesio.

Yet the reigning champs hold no fear for Dan Wessel’s men, who have won five of their last seven Super Rugby clashes with the Brumbies (including a 30-12 victory in Super Rugby AU 2020).

Melbourne were unlucky not to take the chocolates against Queensland after Matt Toomua’s 81st minute penalty kick sailed wide and will back themselves for an upset in the nation’s capital.

In a swathe of front-row changes, Wallaby prop Scott Sio replaces the injured James Slipper for the Brumbies while veteran Rebels hooker James Hanson slots in for Jordan Uelese.