SANZAAR has today confirmed the addition of new law variations for the Super Rugby AU and Sky Super Rugby Aotearoa tournaments that kick-off in the next few weeks. This includes law variations designed to speed up play and increase ball-in-play time and improve the spectacle for the fans.

SANZAAR tournaments have a history of innovation to ensure they engage spectators and provide the necessary high-performance pathway to success at international level. Several exciting law variations were implemented in Super Rugby 2020 in Australia and New Zealand [see table below] and will be implemented again in 2021, but several additional variations will also be introduced this season depending on the tournament and the decision of the National Union to implement them.

Australia
Super Rugby AU 2021 will see two further innovative law changes introduced, including the kick-off and restart variations seen in Rugby Sevens. For this season, a free kick will be awarded following any infringement off the kick-off and restart. This includes an enforced 30 second time limit for restarts to happen following a conversion, penalty or drop goal as well as restarts that are kicked out on the full or if teammates of the kicker are not behind the ball. The team that was set to receive the ball will get a tap from halfway. This law has been introduced to quicken up general play and reduce unnecessary scrums.

In addition, the Golden Point law variation introduced last year has been tweaked for season 2021. A drawn match now to be decided by ‘Golden Try’ in extra time. The first try scored in the 10-minute extra time (2 x 5-minute halves) will win the match for that team. If a penalty or drop goal is successful within this extra time the points count towards the match score, but the game will continue until either a try is scored, or the 10-minute period expires. This update is to encourage attacking play in the extra time period. Full details click HERE.

New Zealand
The Sky Super Rugby Aotearoa tournament will see the introduction of a goal-line drop out for balls enforced in goal. When an attacking player carrying the ball is held up in the in-goal or knocks the ball on, play restarts with a goal-line drop out. When a kick enters the in-goal area and is forced by the defending team play also restarts with a goal-line drop out. The tournament will again include extra-time if the scores are level [there were no drawn matches in 2020] – but unlike Australia, if a match is drawn at full-time a single 10-minute period will be played with the first points scored ensuring the win.

The major innovation in Sky Super Rugby Aotearoa is the global debut of a captain’s referral in rugby. This law variant has been introduced in several sports and New Zealand Rugby will trial it in rugby with each team given one referral which can be activated in one of three scenarios: any decision in the last five minutes of the game, an infringement in the build-up to a try or foul play. Full details click HERE.

SANZAAR CEO Brendan Morris stated, “Super Rugby has always prided itself on being an innovative rugby tournament and this will continue with Super Rugby AU and Super Rugby Aotearoa in 2021. With the aim to improve the game for players and spectators alike we are excited by the introduction of some fresh ideas and the continuation of the law variations that last year proved very popular.”

“We really want to see match tempo increased, fewer stoppages in play and defences manipulated with more space created for try-scoring opportunities. Particularly interesting is the ‘captain’s referral’ that has been implemented in several sports in recent times including rugby league, cricket and tennis. Now it is our chance to assess its suitability and to see if it has a place in our game.”

“We look forward to working with Rugby Australia and New Zealand Rugby over the coming months to roll out and assess all the law variations, as well as receiving feedback from fans which we believe is a critical part of the review process to assess the value of these innovations for permanent inclusion in our tournaments,” added Morris. 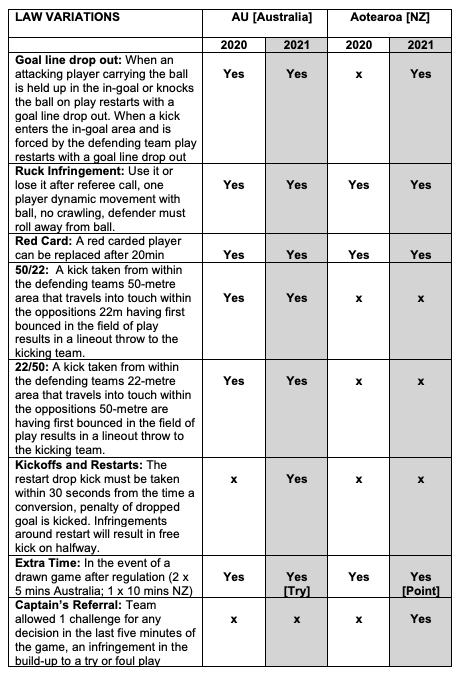