Super Rugby – not just about possession

It seems like a logical statement to make that the sides with the most possession would be the teams that are scoring the most points in Super Rugby, but that isn’t necessarily the case, particularly in the 2016 campaign.

The average time each team spends in possession so far this season is 15 minutes and 53 seconds and it is the Blues who demand the longest on the ball so far this season at 18 minutes and 10 seconds per game. However they are the only New Zealand team ranked higher than 9th in the category; three of the top six teams are from South Africa, while the Rebels lead the Australian Conference by nine seconds over the Queensland Reds.

While the Chiefs have scored the most points of any team so far with 34 points and five tries per game in 2016, they average almost a minute less than the competition average for time in possession. Conversely, the Reds have struggled to put points on the board but can boast the fifth longest time in possession of any team and over a minute more than the competition average. 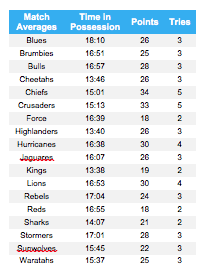 It seems, then, that the weight of possession does not necessarily translate to points.

Only one team so far this season to average more than 30 points per game (Hurricanes) have required above the average time in possession to post those points and each of the two lowest scoring teams have enjoyed in excess of 16 and a half minutes of possession per game.

Stormers duo Robert du Preez and Jean-Luc du Plessis have been the most effective point scorers in the competition based on the frequency of their scoring. The former scores a point every five minutes, the most frequent of any player in the competition who has played at least 100 minutes, 30 seconds more frequently than du Plessis.

The Blues Ihaia West might rank fifth in the category but the fact that he’s notched a point every 5.8 minutes from 641 minutes played in the competition so far this season make him the most frequent long-term scorer of any player in the competition and he’s also one of only five players so far to have broken into triple-digits for points scored.

Having a reliable player on your side who keeps the scoreboard ticking over is always important, and come the end of the regular season it could be these points that make all the difference.