Rugby Australia and New Zealand Rugby have confirmed the final schedule for the inaugural Super Rugby Trans-Tasman that kicks off on 14 May.

Due to short lead-in, the proposed ‘Super Round’ has been replaced by another round of home-and-away fixtures in Round Three.

Games will be taken to regional centres in Hawke’s Bay, Townsville and Wollongong while the Blues will square off against the Brumbies at Eden Park in Auckland.

Round Three will kick-off at McLean Park in Napier when the Hurricanes host the Western Force on Friday 28 May before attention shifts to WIN Stadium in Wollongong as the Waratahs square off against the Crusaders at 3.05pm on Saturday afternoon.

The action then moves back across the Tasman for the Blues clash with the Brumbies before a tantalising Saturday night showdown between the Queensland Reds and Chiefs at Queensland Country Bank Stadium in Townsville. The clash will also mark the first-ever Super Rugby match at the new venue.

Round Three will then wrap up on Sunday afternoon when the Highlanders host the Rebels in New Zealand’s south.

Rugby Australia Chief Executive Officer Andy Marinos said: “It’s great to be in a position where we can play our New Zealand counterparts again.

“It has been a terrific Harvey Norman Super Rugby AU that has already far exceeded everyone’s expectations, and we still have the last Round left to play before Finals action.

“Our players are intensely focused on finishing this Super Rugby AU season on a high, and then throwing everything at their Kiwi counterparts during six action packed weeks of Trans-Tasman footy.

“Unfortunately, we weren’t able to host a ‘Super Round’ in Round Three however I’m really excited to take games to Townsville and Wollongong and engaging with those communities,” Marinos said. 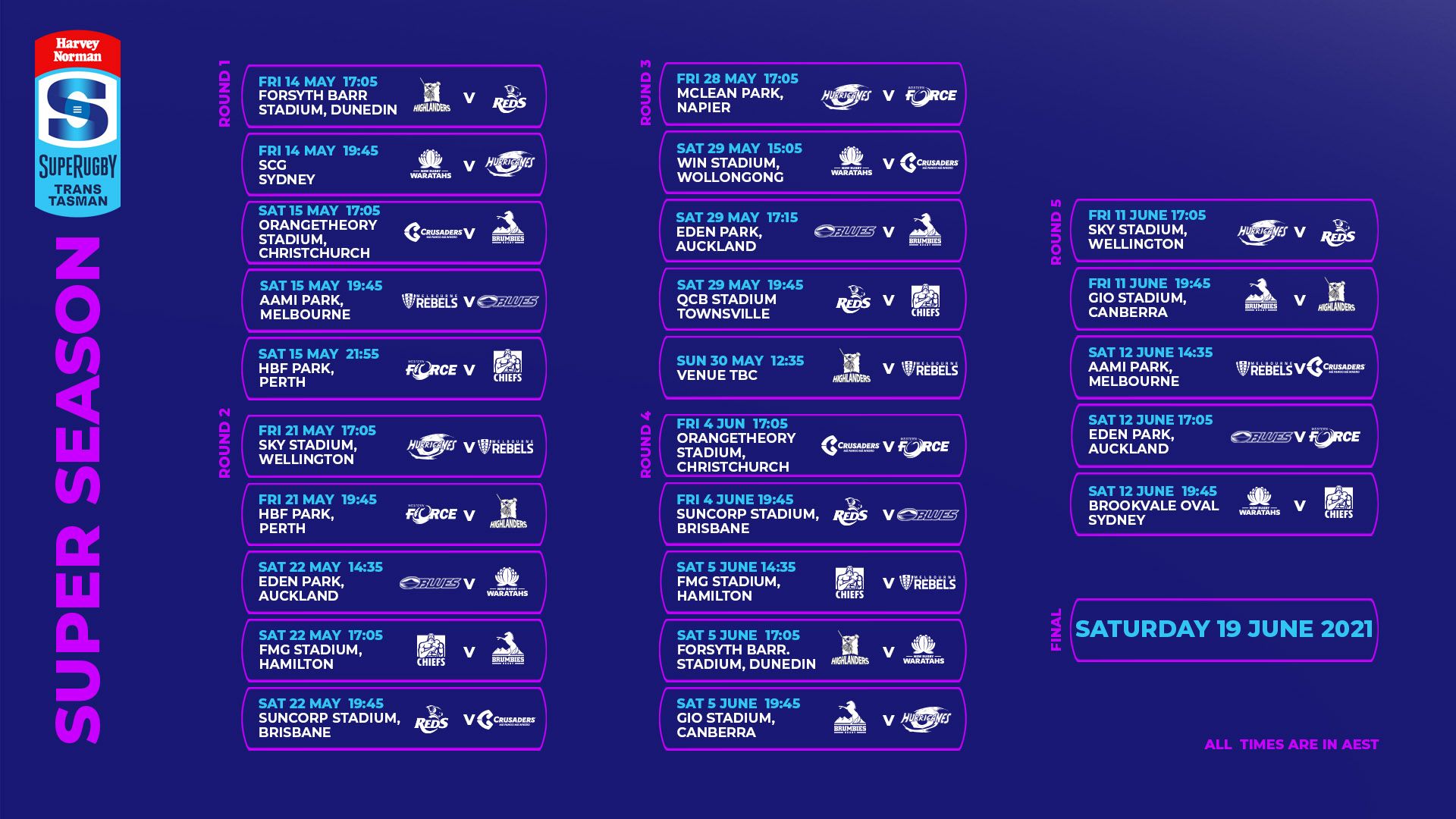 “We are grateful to be in a position to lock in the final matches for Sky Super Rugby Trans-Tasman and with the travel bubble open we’re all looking forward to welcoming our Australian counterparts to New Zealand next month.

“It’s disappointing we were unable to get the ‘Super Round’ off the ground in 2021, but I’m sure it’s a concept we will re-visit in the future.

“Fans and players are understandably focused on the exciting final rounds of Sky Super Rugby Aotearoa and Super Rugby AU, but I’m sure when the dust settles there will be an air of anticipation as to how the respective teams measure up against their trans-Tasman rivals.”