Defences are tight these days and offloading in the tackle is an art that several players have mastered .... but who are they?

Rugby fans all over the world rejoiced with the return of Super Rugby Aotearoa. Two action-packed games provided plenty of entertainment as the combatants clashed over local derby bragging rights.

The Highlanders’ Shannon Frizell made a match-high three offloads against the Chiefs on Saturday night, the third time he’s made as many in a Super Rugby match playing at the blindside flanker position – the most instances of any such New Zealand player in the last decade.

However, Frizell still has a fair way to go to catch the Bulls’ RG Snyman (13), the player with the most Super Rugby games of 3+ offloads since the beginning of 2017.

Snyman’s tally is one more than the next best player Jordie Barrett (Hurricanes), who has had 12 games of 3+ offloads for the Wellington-based side in this period. The Sharks’ Jean-Luc du Preez (x9) is the only other forward in the competition with more than seven instances in this span.

What would a Super Rugby starting XV of the best offload practitioners look like? Starting in the backs, SP Marais (70) [pictured] has made the most offloads of any starting fullback in the last half-decade, seven more than any of his peers in the position in Super Rugby. The Highlanders’ Waisake Naholo (52) has made 18 more offloads than any other player to start on the right wing (No. 14) in Super Rugby since the beginning of 2016. 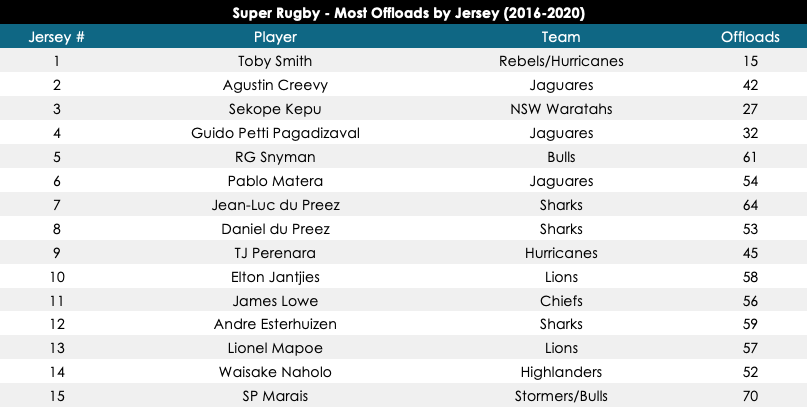 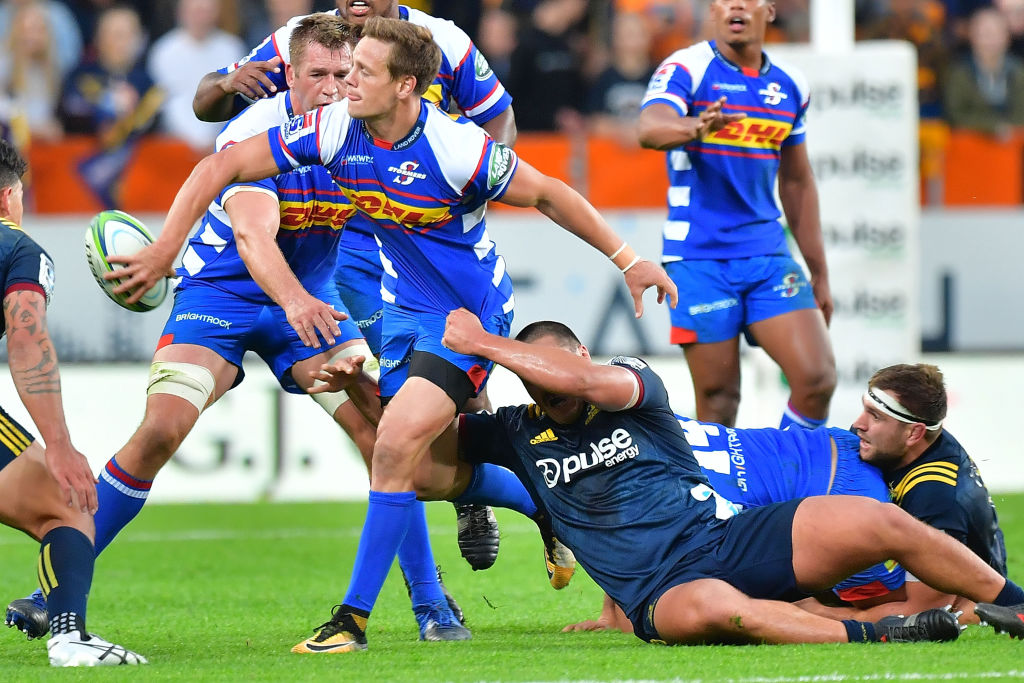 Elton Jantjies (Lions – 58) is one of only two Super Rugby players to start at fly-half in the last half-decade and make 50+ offloads (Richie Mo’unga – 52). The Hurricanes’ TJ Perenara (45) is the only such scrumhalf to make 40+. Moving into the forward pack, we can see the Sharks’ Daniel du Preez (53) at number eight, only one other individual to have started at the position in the last half decade of Super Rugby has made 40+ (Amanaki Mafi – 40). Agustin Creevy (Jaguares – 42) has made almost double the amount of offloads of any other Super Rugby player to start a match as hooker in this stretch, he is joined in the front row by two Australian Test players in Toby Smith (15 offloads) and Sekope Kepu (27 offloads).

A player’s capacity to offload is only as strong as the defence which engages them. A fact all teams should be cautious of over the coming weeks and months.