There have been 73 tries, 449 points, and 44 try assists contributed by players starting from the bench thus far in Super Rugby 2019, a testament to the importance of a fit and firing array of substitutes.

Few teams have benefited from an impressive bench more than the Queensland Reds this Super Rugby campaign, with the Ballymore-based side netting a league-high 10 tries scored by bench players. 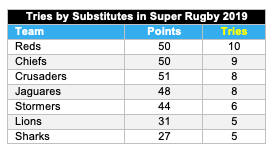 No other Australian club has scored more than three tries from the bench so far this campaign, the Brumbies and Rebels each on a tally of three while the NSW Waratahs have scored a league-low two tries via substitutes.

The Chiefs (9) are next best in this regard, while the Crusaders (8) and Jaguares (8) aren’t far behind. Indeed, the Crusaders may not lead the competition in tries from the bench, but they do when tallying total points scored. The Christchurch side has scored 51 points via substitute players this campaign of which 11 have come via the boot.

Alongside the NSW Waratahs at the bottom of the table are the Bulls and Sunwolves, who have also scored just two tries from the bench this season.

Overall, the Queensland Reds’ bench has been the most prolific attacking set of substitutes in the competition. Not only have they scored the most tries of any team, but they’ve also made the second most clean breaks (20) of any team. In fact, only the Lions (21) have made more clean breaks from the bench this season. The Johannesburg side have also beaten the joint-most defenders (40) of any club via substituted players, though it’s an unlikely candidate that has seen their bench provide the most grunt-work of any team.