Super Rugby has been blessed with some scintillating try-scoring talent over the years, but the 2018 campaign has uncovered two of the best - and they’re on the cusp of something great.

Heading into the 2018 semi-finals, the record for most tries scored in a single Super Rugby season stands at 15, and it’s now shared between five players. The Waratahs’ Taqele Naiyaravoro and Hurricanes’ Ben Lam joined the ranks this season, and will this weekend have the opportunity to claim the record outright for themselves.

The first player to reach the 15-try mark was Brumbies’ Joe Roff, who smashed out 15 tries in the second ever season of Super Rugby. It’s a record that has thus far stood the test of time, with no player since able to best it. Plenty have tried, though, and just eight years later Rico Gear managed to equal the record by scoring 15 tries in 2005 for the Crusaders. 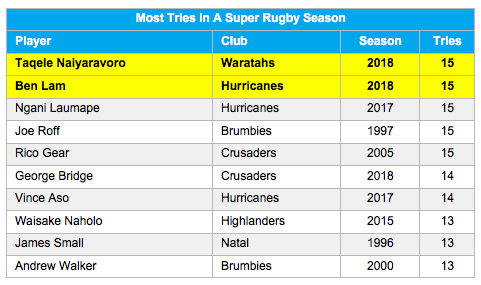 It would then be another 12 years before another player would reach the mark. Ngani Laumape blew many of the park last season, and also finished with a tally of 15 tries for the Hurricanes in the 2017 season.

Now the 2018 finals series has another layer of intrigue set over it, with two players vying to become the first player in Super Rugby history to have scored 16 tries (or more) in a single campaign.

Ben Lam burst out of the blocks for the Hurricanes early in 2018, scoring eight tries within his first four starting appearances for the club this season. He had racked up 14 meat pies by just round 14 before a five-game drought was ended last weekend against the Chiefs.

Waratahs’ flyer Taqele Naiyaravoro also started fast for his club, picking up seven tries within his first five appearances in the competition this season. He’s made a habit of compounding his contributions to games this season, dotting down for multiple tries on five separate occasions in 2018 - more than any other player, and once more than fellow record-hunter Ben Lam. 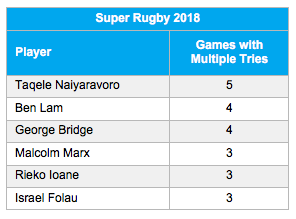 Although Lam and Naiyaravoro are the two frontrunners this season, Crusaders’ George Bridge sits just behind the two wide men, and he too will have his eyes on overtaking both rivals as this race enters its final bend. 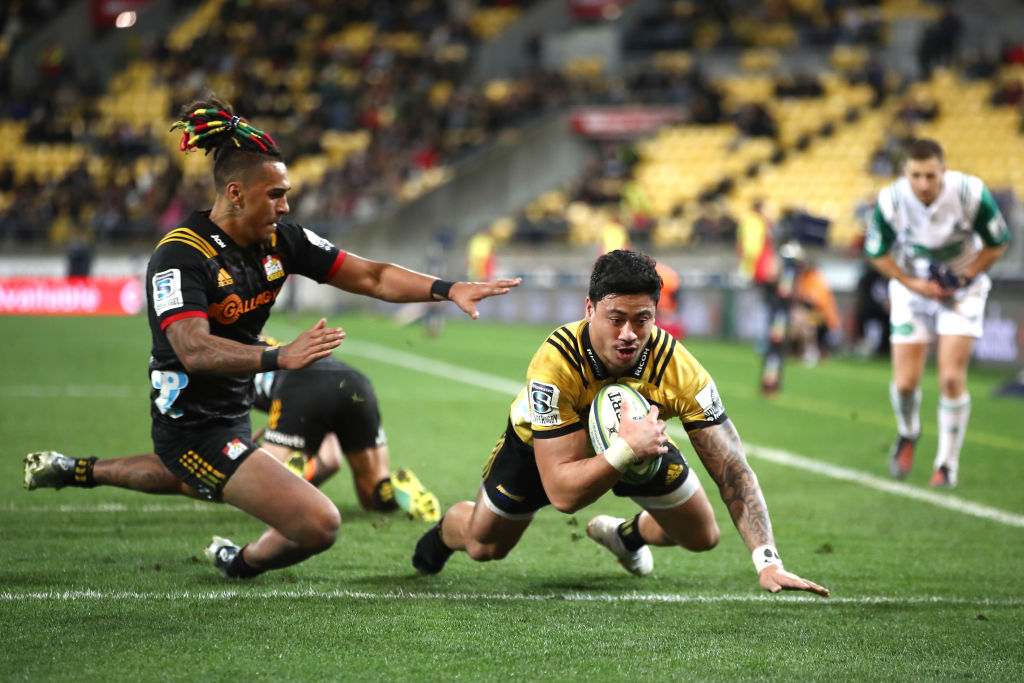