The Come Back Kings

A team launching a second-half comeback to win when all hope seems lost makes for enthralling Super Rugby viewing.... All it takes is one missed tackle, one burst through the defence and fortunes can quickly turn.

This season the greatest half-time deficit overturned so far has been 21 points, the Lions bounced back to win 36-33 against the Rebels after trailing 26-5 at half-time. There have been four other comebacks in 2019 after a side has been behind at half-time by 10+ points. The first occasion was the Rebels in Round 4 against the Brumbies in Melbourne. The home side hadn’t scored a try in the first half, trailing 19-3 at the break. They turned it around to win 29-26, keeping alive their undefeated start to the season as they recorded a fourth successive victory. 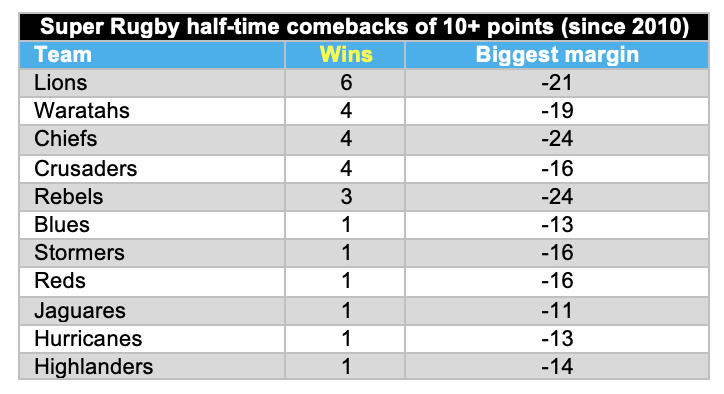 The biggest half-time comeback in 2018 was 17 points, impressively in a quarter final between the NSW Waratahs and Highlanders in Sydney. The hosts were down 23-6 at half-time before charging home to win 30-23. NSW Waratahs fly-half Bernard Foley scored two tries, kicked three conversions and three penalties in that game.

The greatest recovery in 2017 was 19 points, again by the Waratahs as they prevailed against the Rebels in Melbourne. The visitors couldn’t find the try line in the first half, trailing 25-6 at the interval as Rebels star Reece Hodge notched up two tries. The NSW Waratahs’ defence was resolute in the second stanza as they kept the Rebels try-less to triumph 32-25. The result left the Rebels with a fourth consecutive loss.

In 2015 and 2014 the Lions were the only team in Super Rugby to turn a half-time deficit greater than 10 points into a victory. The Johannesburg outfit won three such matches across the two years, twice in 2015 and escaping with the competition points against the Reds at home in 2014. The bigger margin in 2015 was 17 points, also on their home turf as they clawed their way back from a 20-3 half-time deficit to win 28-23 against the Highlanders. 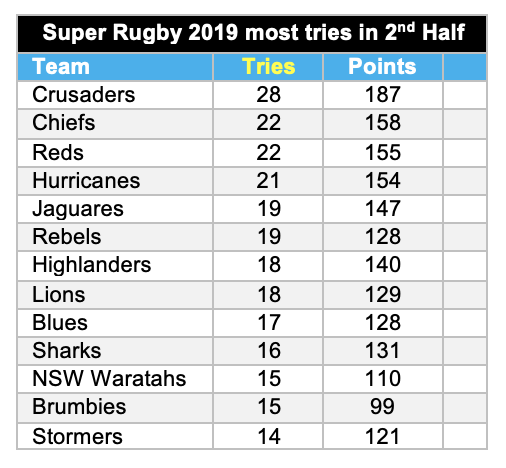 The NSW Waratahs were the only team to come back in the second half from 10 points or more in 2013, providing great entertainment for their home fans as they did so twice in a month. The first came in a local derby against the Rebels in Round 3, the hosts behind 16-6 at the break before sneaking past their opposition to claim a 31-26 win at the final whistle. Three weeks later the score was even closer as the NSW Waratahs met the Blues. The final score read 30-27 to the NSW Waratahs, the Australian side overturning a 24-10 half-time deficit against their Kiwi opponents. NSW Waratahs winger Drew Mitchell played a starring role as he picked up a try, 87 running metres, five tackle breaks and three line breaks.

It is arguably the most exciting thing to watch in the sport, from the grassroots to Super Rugby, the Rugby Championship or the World Cup itself – being there to witness that magical moment where suddenly it all starts to click for the team chasing on the scoreboard.