Qualifying for the finals looks like being harder than ever this season so missing conversions could be costly as wins are sought after....who is leading the way?

The Sunwolves are riding the wave of an emphatic victory over the Chiefs in Round 3 - their first ever victory away from home in the competition - and will be looking to kick on with that success in Round 4. The Japanese club has compounded their success so far this season with an impeccable goal-kicking game - indeed, they remain the only team in the competition yet to miss a kick at goal this season.

The Sunwolves have been successful with all seven conversion and all seven penalty goal attempts this season, with each of those 14 attempts piloted by the boot of Hayden Parker.

The Queensland Reds (1) have missed the second fewest goals of any team this season, but it’s the Highlanders who rank second on the success scale.

The Dunedin club has landed 87% (13/15) of attempts at goal this season, a figure only eclipsed by the flawless Sunwolves. 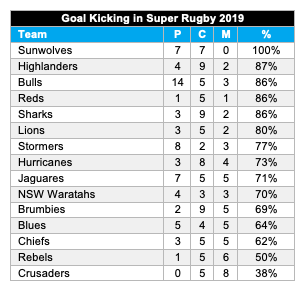 At the other end of the spectrum, there is an unlikely candidate for least successful goal-kicking team. The reigning champions Crusaders (38%) are the only team to miss more of their goal attempts than they’ve converted and sit last by some margin when ranked purely on success rate.

Hayden Parker’s goal-kicking prowess becomes even more impressive when we look back to the tail-end of the 2018 campaign as well. Parker has missed just one goal from a place kick in his last 11 games in Super Rugby, slotting 30/31 conversion attempts and 25/25 penalty goals in that time. Additionally, he’s also slotted one of two drop goal attempts within that span.

The Highlanders’ Josh Ioane is the first player on the coattails of Hayden Parker, boasting a goal kicking success rate of 92% already this campaign - an impressive figure given he had never previously landed a successful place kick in the competition.

In terms of sheer quantity, only the Bulls’ Handre Pollard (19) has scored more goals than Parker (14) in Super Rugby 2019. Pollard enjoys a respectable success rate of 86% from his 22 attempts.